Hey everyone, Incertitude is finally out! The whole game features 10 levels that contain plenty of cool objects, monsters, items, and puzzles.

Hey everyone, Incertitude is finally out! The whole game features 10 levels that contain plenty of cool objects, monsters, items, and puzzles. You have to try and solve the puzzles within each level to try and get Doctor G. Borowskistein out of the strange world he's in. You play through an Introduction level to get to know the story of it all. From there is where Incertitude starts! 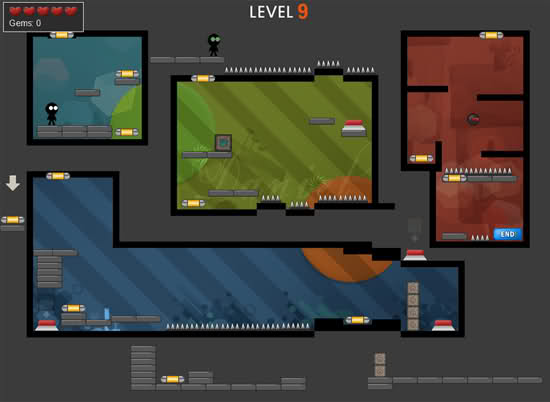 The Controls:
Left & Right arrow keys for Movement
Up arrow for Jumping
Press Space while in the air to shoot a GX-grenade
Hold Down while running against a block to push it
Press "K" for a suicide.

Thanks to everyone who helped me with my game. There is a credit roll at the end of Incertitude.

Go ahead and download it, and try and beat it. If anyone does beat it, please let me know. And whether you do or do not beat it, let me know what you think of my game, I've worked pretty hard on it for the last few months.Thanks everyone for the feedback so far!

So this is a free game? Going to try this as soon as I have time to do so. Congrats on releasing the game :)

This game is awesome, you should think about remaking it on something other then Game-maker. Then you could give the platforming a little bit of work to make it more action based. I really like the style, and the ideas are great. Very unique.

Congratulations on Completing Incertitude! Finished games don't happen every day, so its awesome that you completed it and released it for free. Thank you for your hard work!

The art is very stylish. Good job on the accomplishment!

Thanks for all the feedback everyone! By the way, v1.2 is now out, so you can save & load your game now!