If you make it out of the mines, we will lead you into the cities of Gor Rugi. These are guarded well, most of the inhabitants are not living there voluntarily. They are being forced to work in the mines for the Worrajug Empire. So it is not a surprise there is a lot of trouble around - especially when there are some rebels on the run. 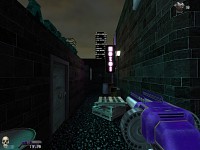 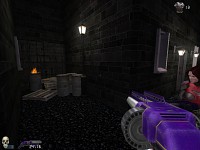 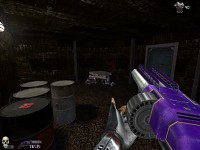 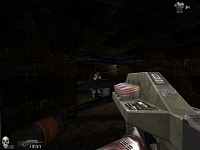 The mixture of lighting, use of decals and illuminationmap shaders creates that kind of 'city mood' which differs from the rather monotone, dark mining environment. Additionally, we've covered the streets with many objects lying around to evoke a dense feeling here.

You will be able to enter buildings and houses, stop by at a gun shop, fight in the streets of the city and enter the tunnel system to clear your way below the city.

Isn't that an interesting offer from the catalog? We promise: You won't find a better travel package for Gor Rugi City. So we hope to welcome you on board soon.

The purple on the shotgun can use some toning down I think.
Its the first thing that pops out, and it doesn't match the environment at all.

every time I see this all I can think of is the original UT.

Wow, I almost thought that FPS Creator was dead, especially since FPSCX10 didn't sell too well. Good to see that people are still using a great game creator that has a lot of potential.