Serving the throne is serving the Empire! The Imperial HoloNet will bring you relevant news about the latest events from all around the galaxy, censoring away only the unimportant! 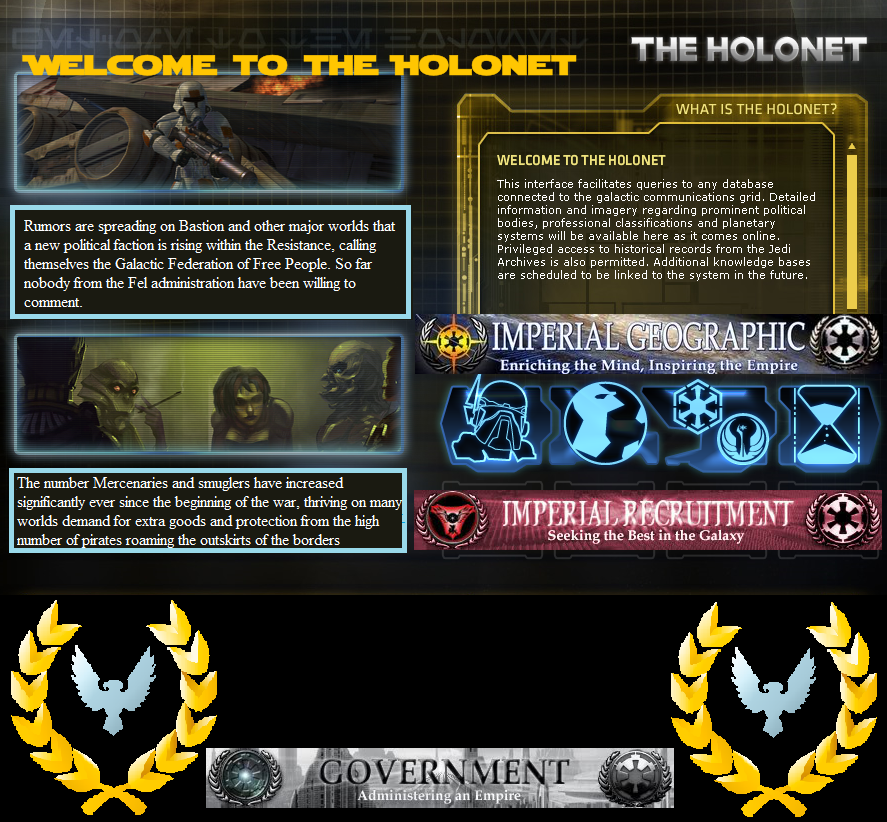 Welcome to the Imperial HoloNet!


Now that the Fel Empire has set up its own HoloNet network across the Northern sectors and removed the old ones. The Imperial authority has worked tirelessly to set up an open and easy to access way of communicating across the Empire. With the new citizen identification card all Imperial citizens received before the old HoloNet was taken down, you will now have basic access to the HoloNet. All citizens can get access to additional features depending on your contributions to the Fel Empire.

For additional information look below!


Want to know about the Fel Administration or do you seek a position within the Imperial Government? See below!

Do you want to earn citizenship within the Fel Empire or seek glory on the field of battle? Check out the official military channel below!

Do you want to know more about the vastness of space and the many sectors of our Glorious Empire? Go to the add below

Still considering whether I want keep the news inside of the article (Too much work sometimes) or post news in images and then insert links. So I haven't included any news yet.

Anyway, let me know what you think.

Damn nice, if I do say so myself... Real nice job.

Well, just wait until things start to go faster. Then I am sure it's me that's gonna be the lazy one xD

Wow you just set a new standard, lets see what I can do with the Battle-Net...

I'm so proud of the ppl I learned the basics of HTML to :'D
keep up the good work!