Biomes, the distinct land-types of Crashlands, come in three flavors: Savannah, Bawg, and Tundra. While the Savannah felt like a fun place to explore from day one, both the Bawg and the Tundra were suffering from a distinct lack of exploratory fulfillment, despite containing more cool stuff (resources and creatures) than the Savannah. Something was off about these biomes, and we couldn't figure it out. Turns out, Spider Monkeys had the answer.

Posted by bscotchshenani on Feb 5th, 2015

Crashlands is, at its heart, a game about exploration. Such games fuel the itch to find out what’s on the other side of the screen or around the river-bend have. To do so they have to cleverly handle how they dole out resources and unique landmarks. The location, rarity, and spread of these resources and geological structures -- the "Distribution," as we call it -- is the primary driver of exploration enjoyment.

Getting Distribution right results in a delightful dripfeed of Dopamine, that lovely neurochemical that makes you feel ALIVE!

Getting it wrong means players are either bored or frustrated.

Our problem post-alpha was that we’d managed to simultaneously achieve and fail at getting the Distribution right. In the first biome, the Savannah, there was so much Dopamine we couldn't stop playing. In the other biomes, we (and our testers) felt lost and bored. The distribution of flora, fauna, and geological features (lakes, rivers, etc) compelled player exploration in one biome but not the others, and we needed to find out WHY.

BIOMES, as they were

The Savannah, our initial biome and the one that had 6 months of iteration before the others even appeared, felt great. Its creatures and resources were organized radially around the player’s crashed ship, such that as they moved further away from the center of the map the world got more dangerous, creatures more powerful, and resources more difficult to obtain. 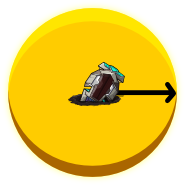 This generated that constant sense of novelty we were striving for with our exploration; players discovered lakes, tar pits, and stone quarries alongside rare versions of creatures and clusters of rarer plants. Exploration was in high gear!

When we added the Bawg (the second Biome) we decided to extend this radially-organized-difficulty further, since it seemed to be working so well in the Savannah. The Bawg became a concentric ring around the Savannah island, such that its easiest resources were along its inner edge, and its most difficult along its outer. 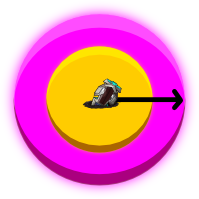 The Bawg is added as a ring around the existing Savannah island, and continues the radial difficulty increase.

On the face of it, this made a heck of a lot of sense… but when we walked into the Bawg all of us felt something very, very wrong. The Bawg just felt boring in comparison to the Savannah, no matter which direction we explored in once getting there. And this was true even though there were brand new and bizarre creatures and land types. So why did the sense of exploring, and of wanting to keep discovering cool new things, evaporate?

Our whole intention with Crashlands was to make a world that was deeply satisfying to explore. That feeling was lost outside of the Savannah, for mysterious reasons, and so we were in something of a panic.

We first did what any self-respecting game developer does when something doesn’t work ; we copy-pasted something that did work: we transplanted the Distribution of creatures, plants, resources, and land-types from the Savannah into the Bawg (while swapping in the appropriate Biome-specific resources and creatures, of course). We had spent 6 months iterating on and perfecting the Savannah Distribution, after all, so we figured we had just done a crappier job in the Bawg.

ON SECOND THOUGHT THIS PLACE IS GROSS

But, as we strode about the ring of the Bawg for the second time, with a Distribution of stuff that was clinically proven to up Dopamine levels (statement not evaluated by the FDA) we were dismayed to find that it was still boring. That drive to wander was still missing, even with a design that we knew worked. WHAT WAS GOING ON HERE!?

We backed up further and looked at the construction of the Bawg compared to the Savannah. The Savannah had less variation in ground type (e.g. meadow, mud, grass, stone) but transitioned more frequently between those types (e.g. savannah to meadow to mud). And so we thought, "the ground doesn't change fast enough!" and then nearly doubled the number of ground-types in the Bawg.

And yet AGAIN it didn't work. The land was more interesting, and more diverse, but we still didn't feel compelled to explore it. How could that even be possible?

We no longer had hypotheses for what the hell was going on with the Bawg, and so we said, "SCREW IT, we'll come back to this" and turned our attention to filling out the final biome, the Tundra. 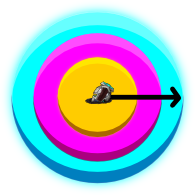 The Tundra ring continued the radial-difficulty increase even further

In an attempt to solve the Exploration problem, which we still thought might be an issue of Distribution, we made so many unique ground-types in the Tundra that it outstripped the diversity of the Bawg. We also added an extra creature-type (MAYBE THIS WILL HELP?!), more pickups, more rare resources... more EVERYTHING.

It was bigger and with more to see than either previous biome. Again, we went back to the trusty Savannah Distribution mapping and slotted in the Tundra's unique resources.

And then we were ready to experience what would certainly be the most amazing exploration experience in our gaming lives. We walked into the beautiful Tundra ring and... that feeling of sameness, of nothing being around the corner, swept over us. The exploratory drive necessary to our game had left us at the edge of the Savannah and had never come back. No matter what we did.

What in the DICKENS?!

Questioning our own sanity, skill, and intelligence, we put the project down and turned toward the BscotchID system and our previous games for 3 months.

It was only after that long break, and the clearance of mind-baggage that the break allowed, that we stumbled, blind, into the answer. We restarted work on Crashlands, without even worrying about the exploration-boredom problem and instead focusing on how the story component of the game would work. In the process, we decided that the story would work best if the biomes were split into separate Islands, rather than concentric rings. And so we tried it out. 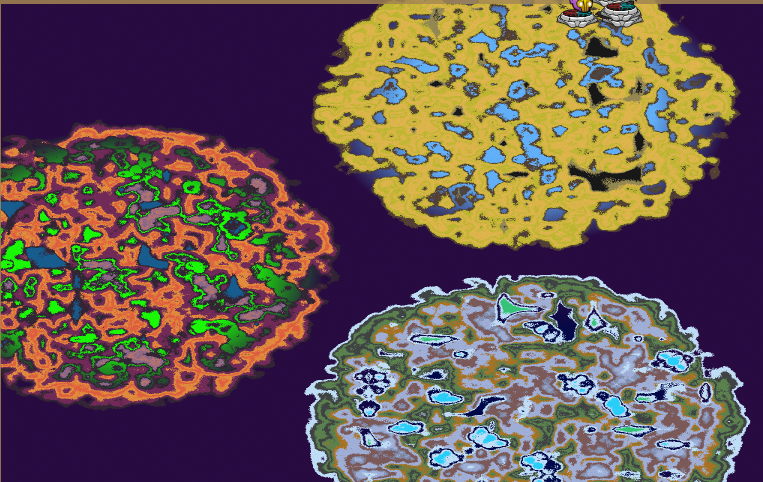 We figured that the player could build bridges from one biome to the next. This meant, however, that players would have to explore from the outside of the circle in, the opposite of the original design. Seth implemented this change to islands and, with a concession for consistency, moved the Player’s crashed landing pod from the center of the Savannah island to its outermost edge. The creature distribution was also inverted, such that more powerful creatures and resources were found in the center of the map.

In this way, the Savannah became, for the first time, like the Bawg; players started on an edge. 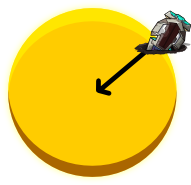 Players started in the new Savannah next to the ocean, and worked their way inward to more difficult content.

We booted up the game and took a walk-through the Savannah to see if it was working. It was indeed working, but we noticed something interesting: The Savannah was now boring! That sense of exploration, of hunting for resources and finding surprising geographical structures, had disappeared just like it had in the Bawg and Tundra!

And so we finally realized that our exploration-issues were not the fault of the Distribution of creatures, nor the number of differing land types, nor the transitional tiles between those types, nor the sheer number of things available to discover.

The cause of exploration-boredom was how the player got to move through the space, not what was in that space.

So why is this the case? We discussed and Googled around, and in the process found something interesting: the answer could be found in studies of Spider Monkeys.

Spider Monkeys use an exploration strategy called Central Place Foraging. This term simply refers to the behavior of spiraling out from a central point to find food and then returning home via a different route. This kind of foraging maximizes the potential to discover things while maintaining a sense of "home". It turns out that humans, by use of our villages, cities, and homes, do exactly the same thing. 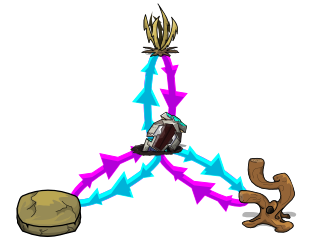 Search paths from the crash site, the player's "Central Place", would naturally look something like this, according to Central Place Foraging theory.

And this is what we had accidentally taken advantage of with the radial nature of the Savannah. 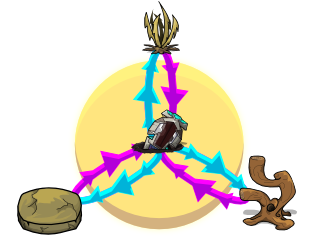 When overlayed atop the original, radial Savannah, we can see how all exploratory and foraging paths are open.

In the Bawg and Tundra, however, we placed the starting point of the player on the very EDGE of a Biome. We cut off most of the potential search paths that are most invigorating (and optimal) for humans. We were working directly against the human brain’s natural wiring for exploration. And, at the same time, we were taking away the sense of "home". 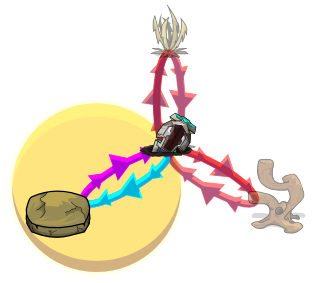 When we move the Central Place to the edge of the Savannah, only one of the original foraging paths becomes possible. And even then, because the difficulty increases toward the center of the biome, the player can't actually pursue it effectively!

Now understanding that it wasn't a problem of distribution but of foraging pattern, we made a major design decision: players must always start at the center of each biome.

But how to do this? Simple: with sci-fi handwavy magic! The only way to get from one center to the next without crossing the space between is a WORMHOLE. And so players will now have to discover the warpstones that let them travel between biomes. This warpstone requirement allows us to make biome discovery much more integral to the story, since warpstones could be defended by bosses, crafted using unique items, and so on.

And further, since we didn't need players to walk from one biome to another we suddenly had the freedom to do something cool: make the biomes INFINITELY HUGE. So now they are.

These shifts let us preserve the Central Place Foraging psychology that naturally makes human exploration so satisfying, while simultaneously making the other aspects of the game EVEN BETTER!

Much excitement is building! Nice work!