Post news RSS How should a sliding tackle work in an arcade soccer?

About sliding tackles, local multiplayer and other stuff that will be featured in Kopanito - an upcoming soccer game inspired by Sensible Soccer, Kick Off and Nintendo World Cup.

Kopanito All-Stars Soccer is an arcade soccer game in development, inspired by Sensible Soccer, Kick Off and Nintendo World Cup. If you like these games, you should also like Kopanito.

You'll be able to play a local friendly match with 2 to 5 friends. Any configuration is possible, for example 1vs1, 2vs2, 1vs4, 5vs0. Each team consist of a 1 goalkeeper and 5 field players, non-human players will be controlled by AI. Goalkeeper is always AI-controlled, unless he has the ball.

We've managed to implement support for 4 controllers (along with a keyboard support), so all 5 footballers can be controlled.

Four super-moves are in development: Supershot, Ball magnet, Wall and Charge. They will be available occasionally during a match and will allow to change course of a game.

At current state the game seems free of any major bugs, which we are very proud of (we're conducting extensive internal play-testing). 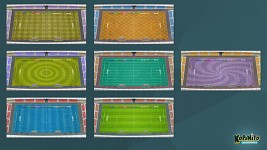 Two additional teams will be present in the game, so there will be total of 104 national teams at launch.

The game got delayed by a few months, but hopefully we will be able to hit Steam Greenlight in April or May 2015.