Introducing the flower system, an equipment item that each character can equip. Equipping flowers might synergize with other equipped flowers, which improves their power, all based on their colour and brightness! And they also techniques!

Wow, it's been a while! Three months! (And more for those checking the devlog through forums like Haxeflixel and TIGsource, I forgot to update them!) Real life intervenes in very harsh ways, but hopefully I'll be able to resume work on the game in a steady fashion, most notably on the content aspect.

One mechanic I really wanted to spice up before fully focusing on content was the flower equipment system. It seemed relatively basic, it gave some stat boosts and a technique. It was a bit too basic, and would have required a lot of work (and balancing) to make a lot of flowers each have unique stats or techniques.

What I've implemented is a system of flower synergies. Persephone is a goddess, and despite having her title stolen, she can still empower her allies through the use of flowers, each character being able to equip up to three flowers at once. 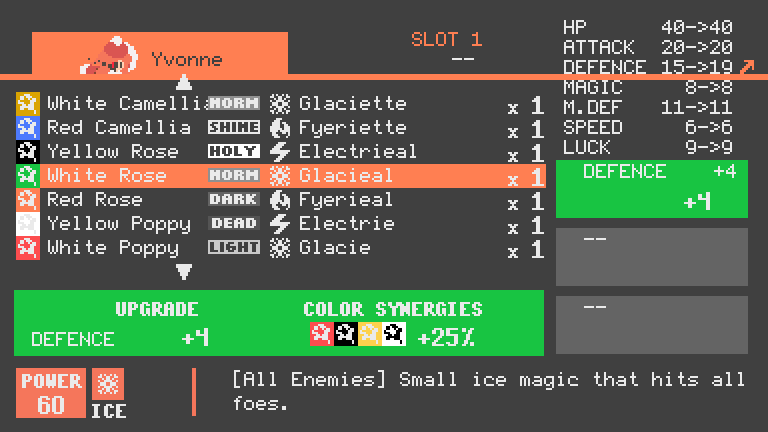 Each flower has three properties:

But by how much? That's where the brightness rating comes in.

Finally, the technique is self explanatory, it's a technique that the user can use during battle, if they have the flower currently equipped.

So far, it's a rather basic system, but here's where things get interesting... Introducing flower synergies! 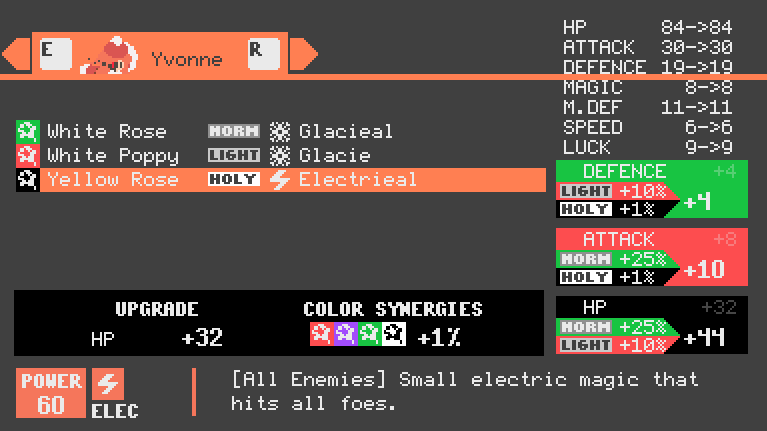 If you equip more than one flower, depending on the colour of the flowers, they might synergize! So what's a synergy?

So for example, a bright flower has great stats to begin with, but poorly increases the stat of the other flower currently equipped, a dark flower. The dark flower, while having a low stat and being poorly boosted, greatly boosts it's bright flower companion, who has an excellent base stat.

To make your life easier, when hovering over any flower, there is a small box showing the boost given to synergizing colours, the amount of said boost, and the base stat of the flower itself.

Finally, there's the joker cards of the flower synergies. 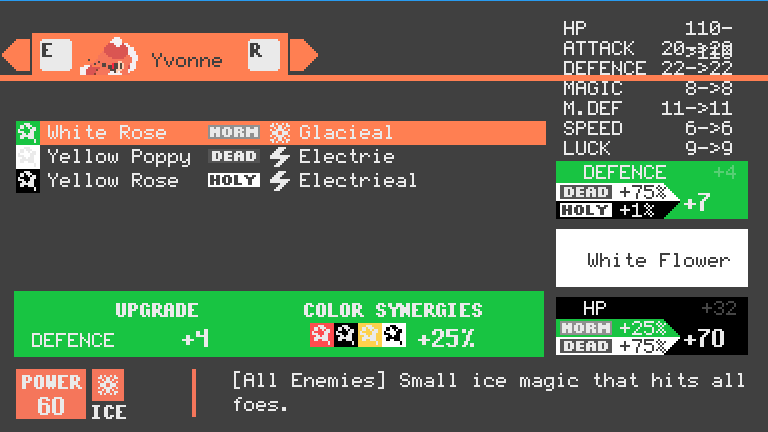 First, there's the white flower. The white flower has no stat, and therefore cannot be boosted. However, it synergizes with all the colours of the game.

And second, there's the gold flower. It boosts all your stats, but does not synergize with any other colour, even white!

Some great news! I got Tiled Map Editor to work with the game! After learning how to use the editor, and after a few game related hurdles I had to cross, the game now uses Tiled for it's maps instead of OGMO. It's great because it actually, like, doesn't lag and use 90% of my processor (im looking at you ogmo :( ). While it doesn't have a project file, I can manage without thanks to the external tileset feature. This will greatly make mapping easier and I'll be able to make larger maps without it taking several days for a single room.

The base story of the game is also being finalized, I guess. I need to spread the story within a mission structure, make sure each mission have some sort of story content, making sure I keep the gameplay within each mission a bit varied to not make things to stale alongside the story...

Hopefully, I'll be able to someday get a press release and a major website overhall done.