some insight into the aims of this campaign. more media soon. beta release to follow. 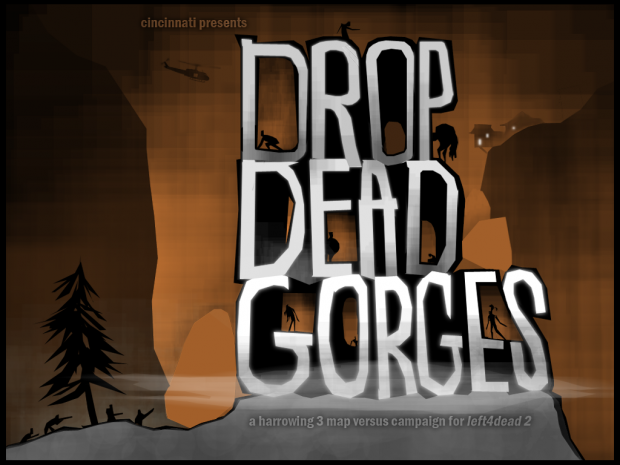 this is a versus campaign

and it's going to be tough

this campaign takes place in an office, a factory, a house, a canyon, a gristmill, a lodge, and a [monastery?] on a bluff. in the end, though, the only thing that really matters to me about these particular settings is that they provide the base geometries for a network of unique, layered paths and a host of opportune gameplay situations.

by opportune gameplay, i mean that as a survivor you are constantly faced with meaningful choices that are heavily influenced by the condition of your team and the status of the special infected team. these choices have immediate and pronounced effects, both auspicious and catastrophic, promoting situational awareness and penalizing impulsiveness. i also mean, perhaps more importantly, that as an infected, no matter what you spawn as or where, there is always something in the geometry and the path-making that will allow you to contribute strategically to the carnage.

carnage in mind, one of the chief early aims of this campaign was to provide a veritable buffet for the special infected. that was the easy part, and it took the form of gratuitous opportunity, both in the sheer number of places that damage can be dealt and in the amount of damage possible. the hard part has since been to accomodate the survivors along the way so that it's just sporting enough to not provoke frustration in the average player. keeping the patient alive, so to speak. my feeling is that it's actually rewarding and invigorating, even in really tough situations, to be a survivor.

in the end, the survivors see the ends of these maps with pretty good frequency (though perhaps not enough on the finale...yet). this has been cultivated by extensive tweaking to the occurrence of and distance between pharmaceuticals and other helpful items, as well as provisioning out a balanced and alternating rhythm of dangerous vs. secure spaces.

as alluded to in the first news post, after nearly three months of testing this campaign every night with members of my community... most nights consisting of two back-to-back games... i'm anxious to unleash its particular brand of gameplay on a wider audience and see what happens.

in terms of the gameplay, one thing i urge is that you give the campaign a chance to grow on you. i've built a level of difficulty into these maps that could result in some initial frustration, not to mention an early exit at the hands of more experienced players.

if you can make it away from the first safe-room (which happens to be the most deadly spot on the campaign) without losing anyone , you're off to a pretty good start. nonetheless, you could drop dead at any moment, gorgeous.