Archaeologically categorized as a site of the Pre-Pottery Neolithic "A Period" (c. 9600–7300 BC), “Göbekli Tepe” is the oldest man-made place of worship yet discovered, dating back to 10,000 BCE.

“Göbekli Tepe” (“Hill with a Navel”, or “Potbelly Hill”) is situated approximately 16 km (10 miles) northeast of Şanlıurfa, an ancient city in southeastern Turkey once named “Edessa” and known as “the City of the Prophets”. While this nearby city has a rich religious history, just how far back religion stretched in this region was unknown until the discovery of “Göbekli Tepe”.

It is a series of mainly circular and oval-shaped structures set on the top of a hill. Excavations began in 1995 by Prof. Klaus Schmidt with the help of the German Archaeological Institute. There is archaeological proof that these installations were not used for domestic use, but predominantly for ritual or religious purposes. Subsequently it became apparent that Gobeklitepe consists of not only one, but many of such stone age temples. Furthermore, both excavations and Geo magnetic results revealed that there are at least 20 installations, which in archaeological terms can be called a temple. Based on what has been unearthed so far, the pattern principle seems to be that there are two huge monumental pillars in the center of each installation, surrounded by enclosures and walls, featuring more pillars in those set-ups.

All pillars are T-shaped with heights changing from 3 to 6 meters. Each T-shaped monolithic limestone pillar contains carved reliefs of animals – gazelles, snakes, foxes, and lions – as well as abstract characters and icons. Bones that have been discovered at the site suggest the hill was used for ritual sacrifices and feasts. Archaeologists interpret those T-shapes as stylized human beings, mainly because of the depiction of human extremities that appear on some of the pillars. What also appears on these mystical rock statues, are carvings of animals as well as abstract symbols, sometimes picturing a combination of scenes.

The hunter-gatherers who built the temple lived in a world that predated writing, metal, or pottery, and at a time when archaeologists thought humanity had yet to group together to worship with priests and sacrifices, yet these Neolithic worshippers somehow organized themselves and found a way to cut and transport these 16-ton stone pillars up a hill and arrange them in a circular, ritualistic pattern.

The hill was littered with an enormous amount of Neolithic flint tools – knives, choppers, and projectile points. These tools are not out of the ordinary, but the sheer number of them is something of a phenomenon, and the fact that they were used to build a religious site, in a time when many historians and archaeologists believed temples and religious practices of this kind did not yet exist, makes this an even more interesting discovery.

The historian K.Schmidt believed that what he called this "cathedral on a hill" was a pilgrimage destination attracting worshipers up to 160 km (100 miles) distant. The discovery of Göbekli Tepe “suggests that at least to the archaeologists working there, [...] that the human sense of the sacred—and the human love of a good spectacle—may have given rise to civilization itself.” As excavator Klaus Schmidt put it, "First came the temple, then the city." Schmidt believes that civilization rose not due to ecological reasons, as has been the consensus, but rather that "civilization is the product of the human mind," a theory that would change the landscape archaeology and our understanding of history.

The new discoveries are finally beginning to reshape the slow-moving consensus of archaeology. Göbekli Tepe is "unbelievably big and amazing, at a ridiculously early date," according to Ian Hodder, director of Stanford's archaeology program. Enthusing over the "huge great stones and fantastic, highly refined art" at Göbekli, Hodder—who has spent decades on rival Neolithic sites—says: "Many people think that it changes everything…It overturns the whole apple cart." 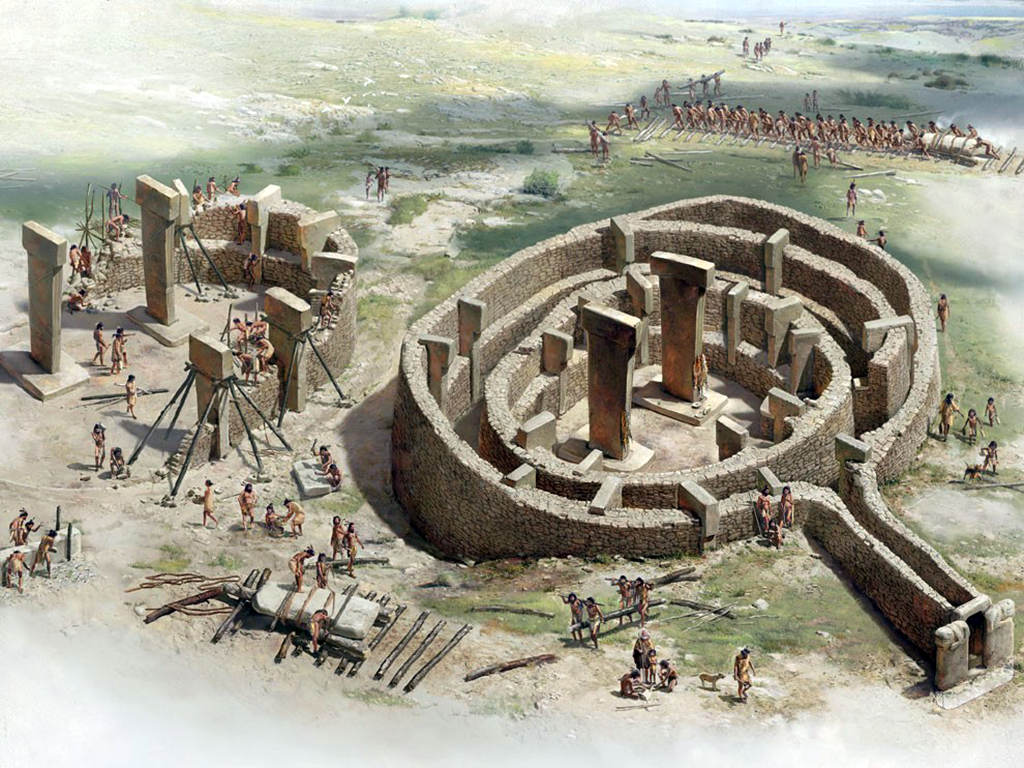