GAU-3 Eliminator Alpha Stage 2, not much can be seen between the other picture I posted a few days ago but much has been done and more still has to be done. But at least at this stage the mod has a very cannon weapon in its arsenal.

As seen in the new picture the GAU-3 Eliminator is now at a stage where it can begin testing in game. From there I will then go on to smooth the rest of it out and figure out how to give it its true shape and not the blocky shape it holds for the time being.

With that said I'm debating if the mod should use the guns real sound or like the rest the sounds from Dawn which would be far more fitting for even the N16 then the Tiberian Sun sounds we have for them at present which could be seen as just stand ins or be kept as the used sound.

Without further a due here is the newest picture. 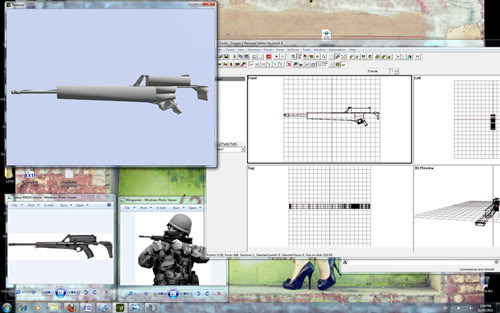 The Minigunner. Man i missed that game.

And if anyone wants to Know the Company that made the Real Gun:
Calicolightweaponsystems.com

And we Think the one in C&C 'Dawn is the LiberatorII (Or was it Liberator I?)

Also a Vid about the Guns: Youtube.com
- From Calico as well!

You can still buy them i Think, 50-100Rnd Magazine, and low recoil ive read (But some guys complain about Jam's, Might be they dont Tension up the Magazine)

Ya its the Liberator I, but for C&C they called it the GAU-3 Eliminator :)