Some of the things I have been working on over the past few weeks, including planetary rings, audio and colony design.

Finished creating the planetary ring graphics for planets. The rings are procedurally rendered so the gaps in the ring are not always in the same place. At the moment the rings use a similar colour to the sector background as I havn't yet found any decent colours to make them. (apart from white)

I tried placing smaller ice asteroids around the ring but it looked really bad, so removed them. 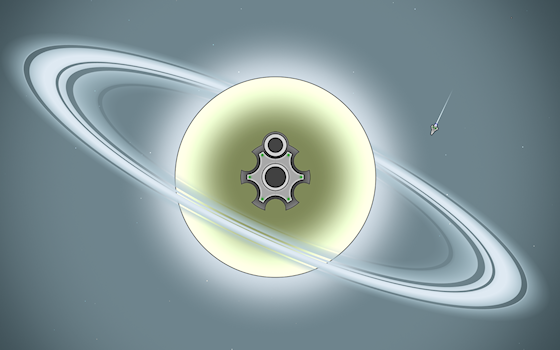 Apparently its possible (but incredibly rare) for there to be multiple rings with one larger than the other, so I added them also. Although I'm not sure if they will stay... I still have doubts that the style of the rings dont go with the rest of the game, so let me know what you think. 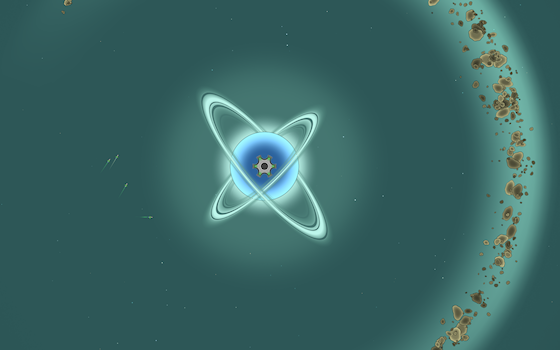 Planets can now be rendered in different sizes. This will be used as a visual indication for the maximum population they can support. I have also added another 3 planet types, Barren, Jungle and Carbon! so there are now 8 types in total.

The music player/jukebox interface is almost finished. With it you can select individual tracks to play and re-order the playlist. Custom music can also be added to the playlist, but needs to be done from outside the game.

Added data pack file support, which is just going to be used for the music. All other game data is easily accessible for modding.

Added random pitch variation support so repetitive sound effects dont sound too similar. From the data files you can specify how much the pitch can vary for that particular item/weapon etc.

I dont tend to write many really extensive design documents when developing the game, but I have done for the planet and colony development system. It will certainly be a lot more in-depth than I had originally planned and will include:

It's all looking really good from the design documents (spreadsheets) and next I will be starting to implement it all, which should be fun!

Are you planning to sell this game or will it be free? I really like the concept of Galaxial. Also, will there be mining?

Yes I am planning to sell the game. There is asteroid mining for gathering resources and limited mining at colonies which will benefit commerce there.

Damn he is selling this game. Quite well in fact.

Very cool. I've been watching this game for a while. Keep up the great work.

Also, there's an old game called Outpost 2 (http://en.wikipedia.org/wiki/Outpost_2 and Wiki.outpost2.net). In it there's a similar thing to "Happiness" called "Morale". At the very least it's shorter and somewhat gives more freedom in interpretation.

Forgot to add the planet types I found/thought of:
- Iron planet (http://en.wikipedia.org/wiki/Iron_planet) - high content of Ore/Metals
- Protoplanet - planet in formation; usually inside asteroid fields and often bombarded with asteroids
- Acid/Toxic
- Rogue Planet - planet not bound to any star system. You can make it "system" of it's own.
- Arid - Mercury, Moon, lots of other moons in our system... Probably the most common type of planets. No bonuses (or even less population than normal). Good when there are no better options nearby or just for outposts.

Also, you probably know that there are few types of Gas Giants. You can make them mineable (with space stations from orbit*) but cannot be otherwise colonized.

There are planets with highly eccentric orbits, so you can put them as well: when they're far from the star they'll be cold, icy worlds or just arid, and when close to the star they become temperate, desert or lava worlds.

Thanks for the suggestions! I will add Iron Planets also as theres some good bonuses they could have. Acid/Toxic will be covered with the bonus/effect system.

I would like to avoid adding large space station structures at the moment. Quite likely they will be added in a future update/expansion though.

Ah yeah my mistake. Barren is the new one, not Desert! :)

Cool I have that game somewhere, will try get it working to see how morale works in more detail.

Just out of curiosity, what currency will the people of the galaxy use?

Will probably just be called Credits.

What throws me off about the rings is that while everything else in the game seems to be represented on a 2d plane, the planetary rings traverse the Z-axis. They look good taken out of context though.

Just working on a flat circular version of the rings at the moment which I think fits with the game style more. Not sure which I'll use.

I think the rings are perfect. 2d is good, but even just one or two elements of 3d show a lot of depth and its just awesome to look at :)

2 sets of rings around Gas Giants is highly unlikely... at least in the way you showed it. If there are 2, 3 or more rings then I think they should be with little difference in degrees to each other.

For empirical "proof" look at these simulations of the Jupiter's moons orbits: Youtube.com and Ircamera.as.arizona.edu

You'll probably notice that while the orbits of the ones far from the planet are not in the same plane (probably because they're just captured asteroids), the moons close to the planet actually are. Probably the same rule would apply for the rings - they should be in the roughly same plane.

I suppose it has something to do with the planet's magnetic field, although I'm not sure if it's true or if it's the only/main reason.

Note that Uranus (and it's rings) have an axial tilt of 97.77 degrees from the solar plane, so the first image in this news post is possible. The second image is unlikely; at the very least the rings would have different radii.

We have only found rings on gas giants.

"We have only found rings on gas giants."

That's probably because the Gas Giants are quite massive, while the rest of the planets (the rocky ones) in our star system are rather small. But we have detected massive rocky planets in other star systems (called superearths) and they might have rings. But that's just my speculation.

What's interesting is that once it was hypothesized that Rhea, a Saturn's moon, could have a small set of rings: En.wikipedia.org. The possibility is still there although it's now believed that it's unlikely. But if it's there then the particles would be very small.

Anyway, the rings and moons must be inside the Hill sphere: En.wikipedia.org and I believe (or at least from the examples we have in our system) that the limit for the rings is much narrower.

Also on the subject of planetary (and not only!) rings: En.wikipedia.org