Details and screenshots of improvements made to the colony user interface including some information about ships designs.

Over the past month I have been mostly working on lots of smaller tasks and bugfixing which wouldnt have been particulary interesting to blog about, although I have made some nice improvements to the colony user interface which I can now show.

This is the same screen that was shown in the earlier blog post about colony development but now looks a lot more interesting and compacted. 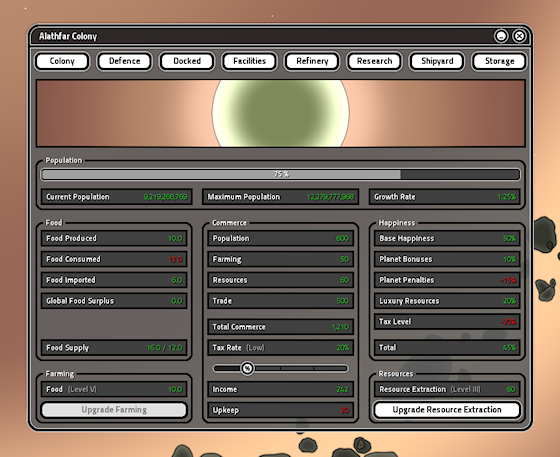 The planet view box at the top will eventually be used to display any special bonuses that the colony may have. They can also be viewed by hovering the mouse over a planet. 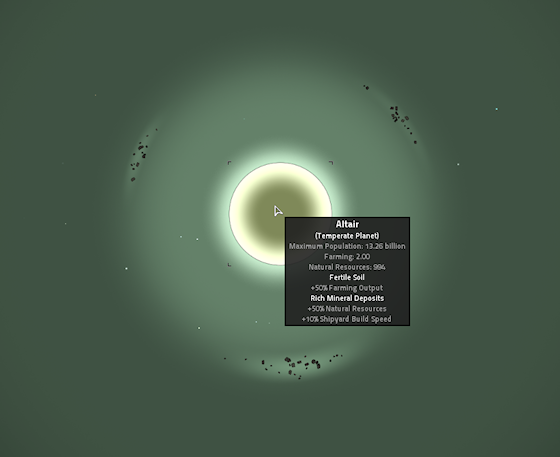 Below is the updated interface for building facilities and expanding the colony. You can see the older window design with some more information about facilities here. 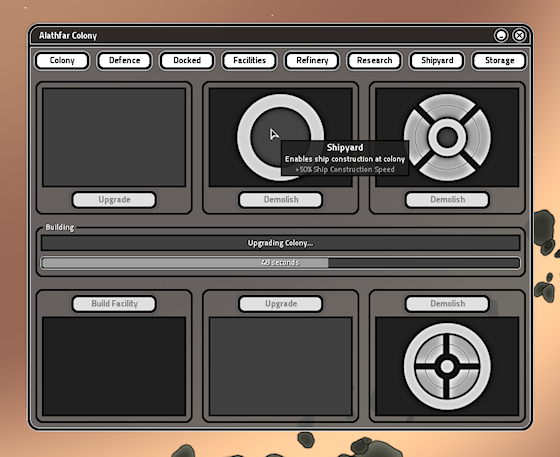 Next is the interface screen for building ships. It still needs some more work but the layout should stay mostly the same. Hovering over each design on the list to the right will show stats, build cost/time and details for the ship.

Adding some extra columns to the designs list showing the build cost and time would be useful, but I dont think there will be enough space for so many columns. Unless I take away space from the left half of the window. The "Resources Required" box also needs some slight changes as its not really clear what the values mean. Example: "4192 / 12000" (resources required / available) 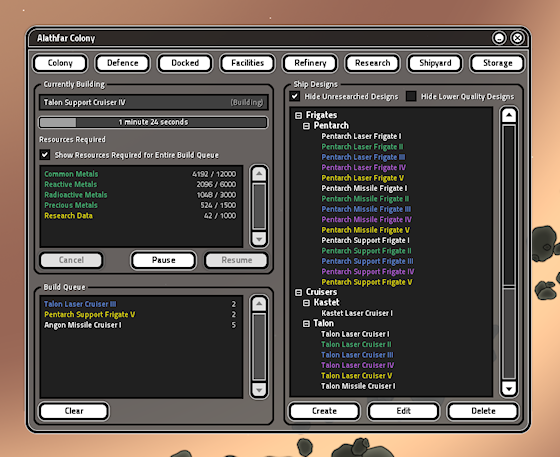 Each of the default ship designs currently have 5 variants (basic, standard, enhanced, advanced and prototype) This is determined by the quality of the modules that are fitted to the design. At the moment you can still build the obsolete designs after researching more advanced modules (more advanced modules cost more and take longer to build) So its a quantity vs quality / cheap vs expensive tradeoff when deciding what to build.

This may possibly change to something simpler as I'm worried its too confusing and increases the number of designs you need to create and keep track of. I had thought about having single designs which are updated to use the latest modules as you research them, but then the costs and build time would probably have to stay the same and the ships using the design would be instantly upgraded.

The other pages I didnt show (defence, refinery, research) still need some more work before thay are finished but are a lot more simple as they dont require much interaction.

Thats all for now.
Let me know if you have any good suggestions!

I'd say the current ship design system looks like it would be easy enough, as long as the lists are expandable and collapsible it would be fine. oversimplification is the problem with many games nowadays.

Really like the design and interface, and seems very easy and yet complex!
even thought the facilities dont looks really like facilities but maybe its meant to be like that?

Glad you like it!
The facility graphics will likely be improved before release, but they are not meant to look that realistic. Also want them to be fairly recognisable so when you take a quick look at a planet you can see straight away what is built there.

I would suggest making some animations for when you hover your mouse over a facility. For instance, the shipyard could show building a ship (for example in a few steps/frames) and then it flies away. This should shorten the learning curve of what is what and because of the hovering the animation won't draw your attention when you don't want it (since it won't be playing then).

Also, in real life, often the results of one successful research could benefit other projects as well. So, when a research is done, for example - a boost on a fighter's engines, there is a chance that it'll increase the parameters of other fighters as well with certain percent. For instance there is 5% chance that it'll increase the performance of a given fighter (similar to researched), 3% to all similar fighters, and say 1% to all fighters.

I agree with neronix17, don't oversimplify the game, make it easy but yet complex.

About the facility graphics, maybe you could use concepts of the facilities, not photorealistic concepts, but something nice looking and that fits the game design. The shipyard would be easily differentiated from a refinery and other facilities.

I love really complex games (Dwarf Fortress, EVE Online, X3) so definitely wont be trying to simplify the game. Complex but not overly complicated is what I am aiming to achieve.

The facility graphics style I feel is ok at the moment but I will be improving them slightly by giving them better shapes and more polish etc.