Here is a breakdown of what is planned for the initial version of BIP including what parts are done, what parts will be done and what I would like to have done.

This here will be an as detailed breakdown as I can provide currently of what my plans are for this mod. I will go into what I plan on doing, what I have done so far and what I would like to do but haven't settled on. So, let's not waste any time and just get right into it.

The Eorl Kingdom and the Eorling Culture 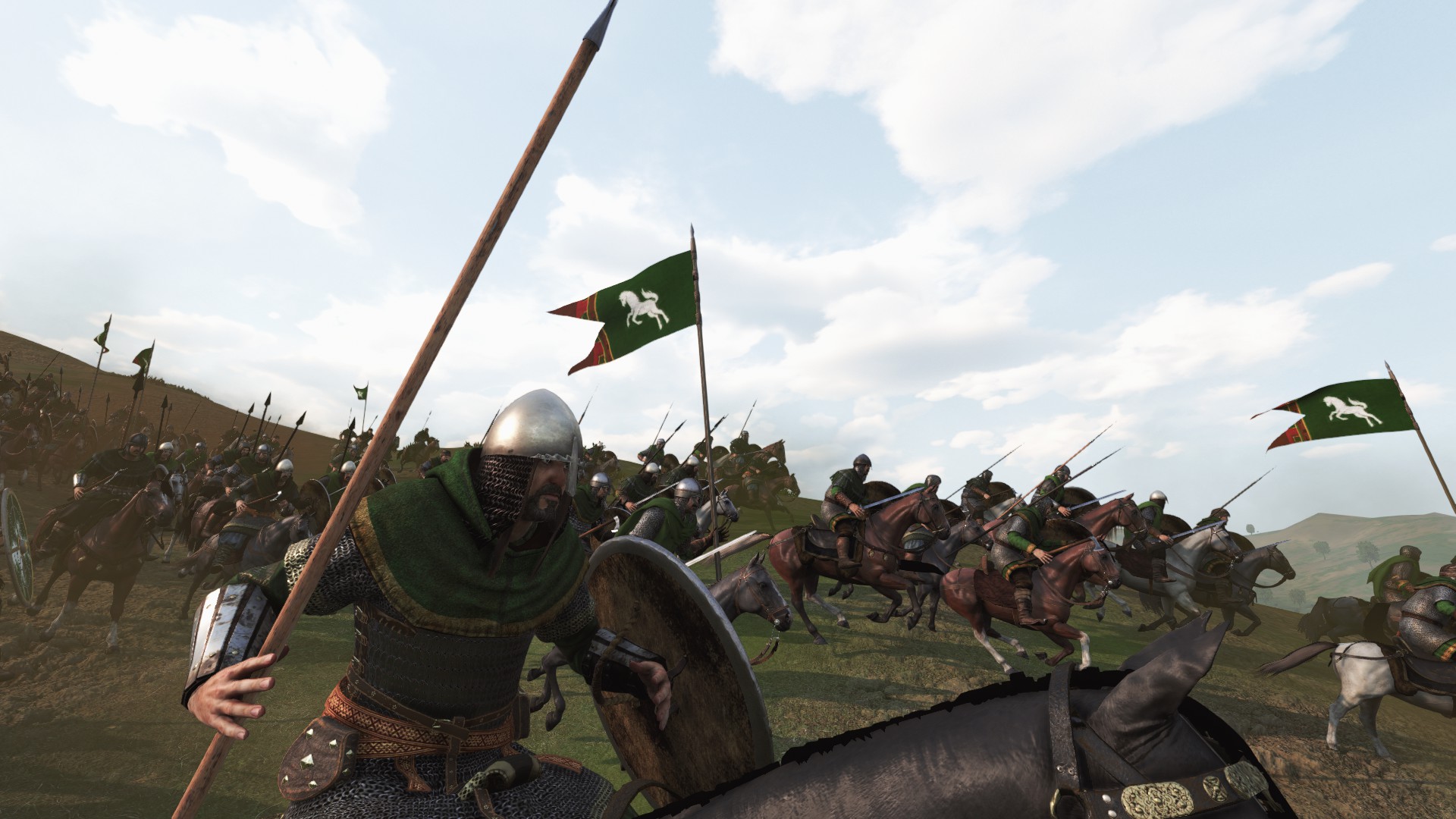 The Eorl Kingdom will be a new faction, situated in the coastal plains north of the Vlandian heartland and west of the Battanian highlands, where the borders, in vanilla, of the Sturgians, Vlandians and Battanians meet. They will have 3 cities and 5 castles in this region at the start of the game. They will be a cultural stew of all pre-mentioned cultures/kingdoms in the vicinity. They're known for their fierce horsemen and the plan is for a separate version of their cavalry to be available in it's own mercenary form. To combat their Vlandian neighbors and their knights they've also adopted horse archery with some proficiency but not to the extent or skill of the Khuzaits. Their infantry is of middling quality, barring their elite top tier troops. Their combat doctrine is one focused on mass cavalry charges to loosen the enemy formations up, followed by medium infantry to help clean up the scattered and disoriented enemy.

They will start out with 4 houses (clans):

Their king will be Dúnhere of the House of Eorl.

Some Eorling names will be: 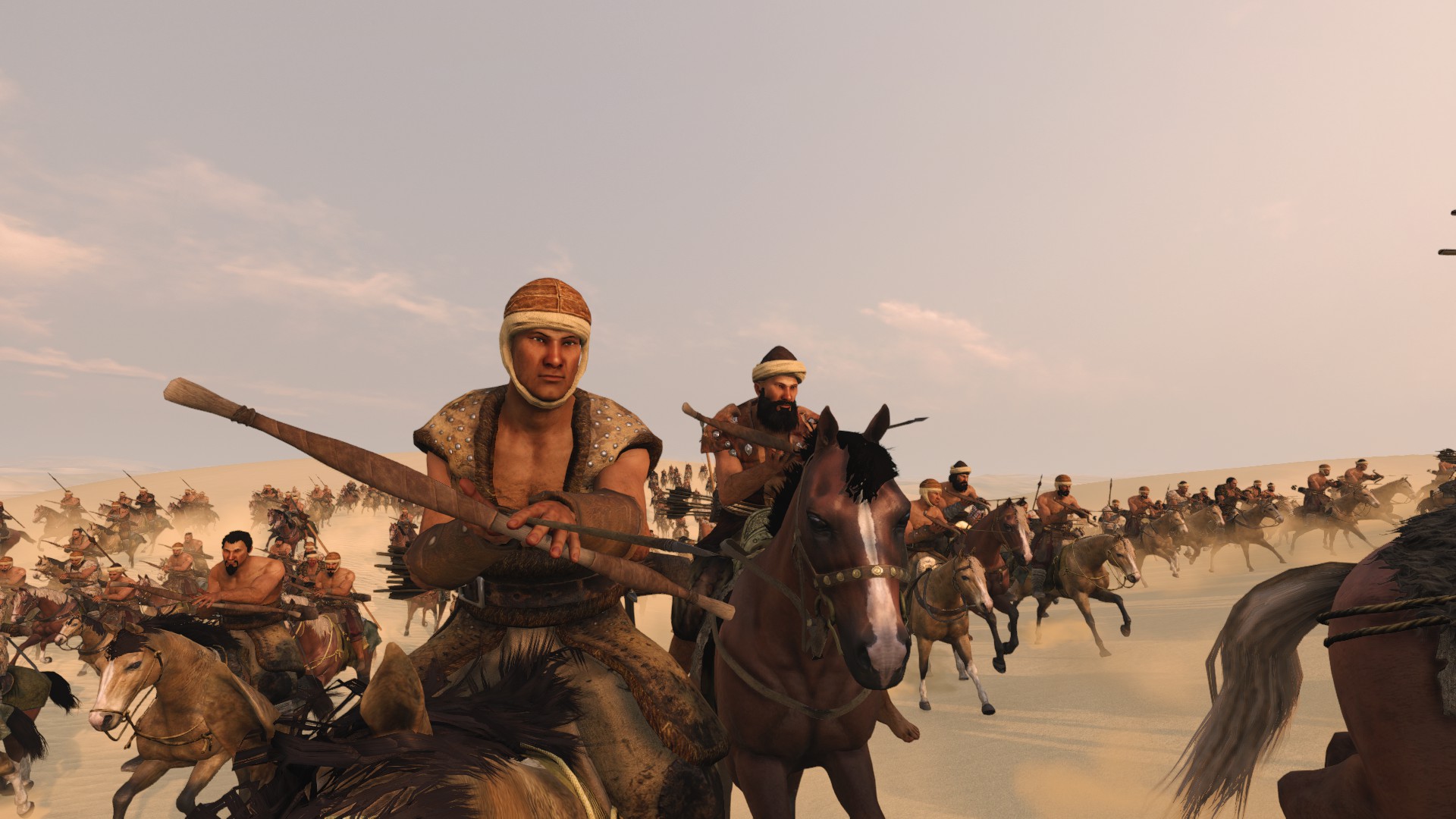 The Durkhan Tribes will be situated in the far south eastern corner of the map in 4 different cities. They are a primitive, nomadic people. Theirs is a warrior culture, focused around raiding and pillaging both in the lands of the Aserai and Khuzaits, and even the Empire, when the opportunity presents itself. They fight almost entirely on horseback but can perform admirably on foot as well. The Durkhan are not known for the craftsmanship of their equipment, with the exception of the massive falchion blades carried by their senior veterans, the Storm Warriors. As the Durkhan tribesmen are a mostly fragmented and rigid people, unwilling to adapt or change their traditions, they have failed to develop to the same technological levels of their fellow Calradians. Therefore, all of a Durkhan warriors strength lies in his skill, not so much his equipment. They all posses above average combat stats and sub-par equipment, barring their horses, for all tiers of their roster but can nevertheless take on a formidable glass cannon role.

They will start out with 4 tribes (clans):

Their high chieftain will be Durkhun of the Ilkhan Tribe.

Some Durkhan names will be: 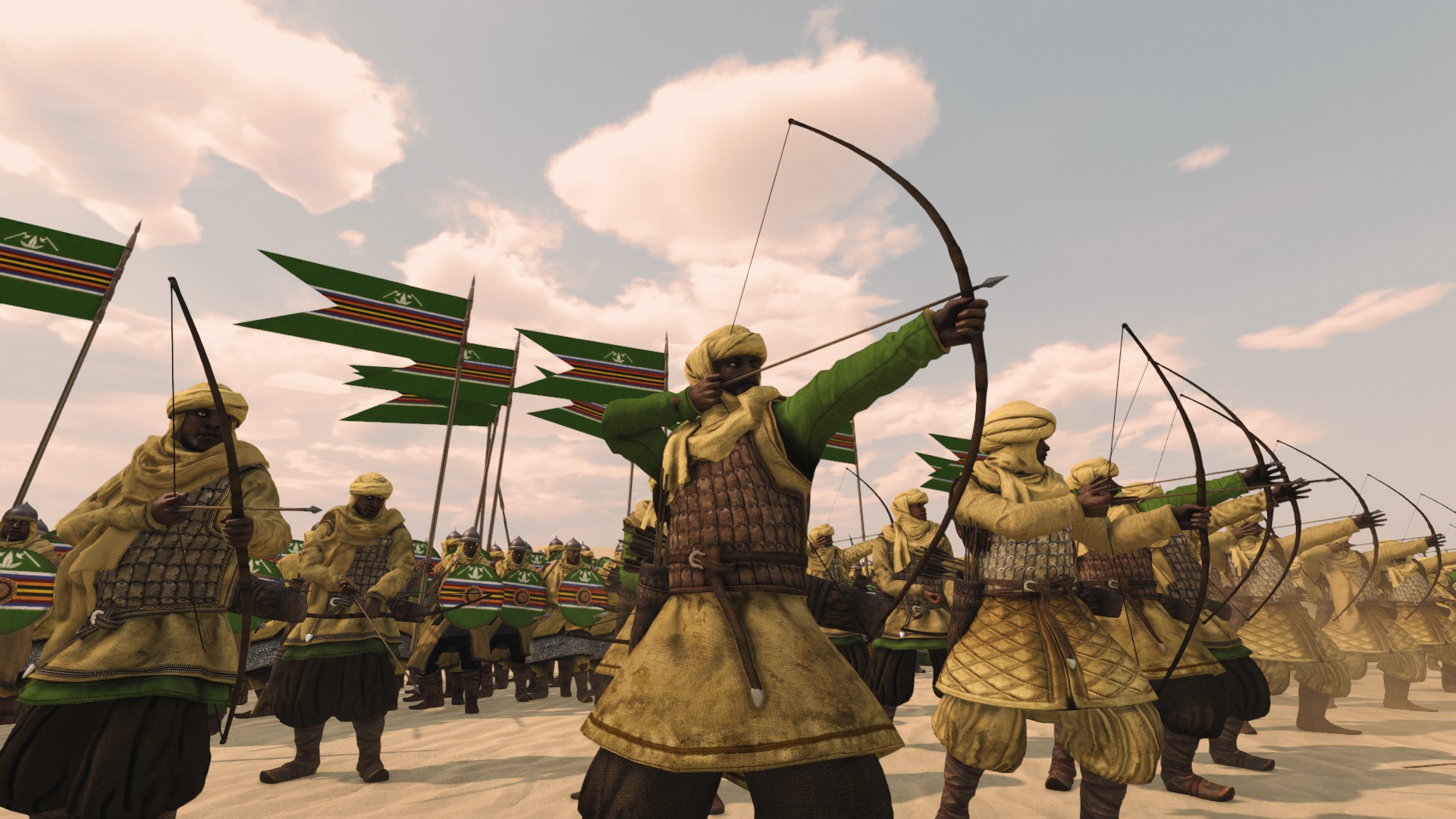 The Subuwari Kingdom will be located in the far south western corner of the map. They will start out with 4 cities and 2 castles. They are very much influenced by the Aserai culturally and militarily but have maintained parts of their culture and fused the two. On the battlefield, they are known for their skilled archers and proficient use of camels as their main form of cavalry.

They will start out with 5 clans:

Their king will be Kwandosi of the Idoma Clan.

Some Subuwari names will be:

The Norse Kingdom and Norse Culture 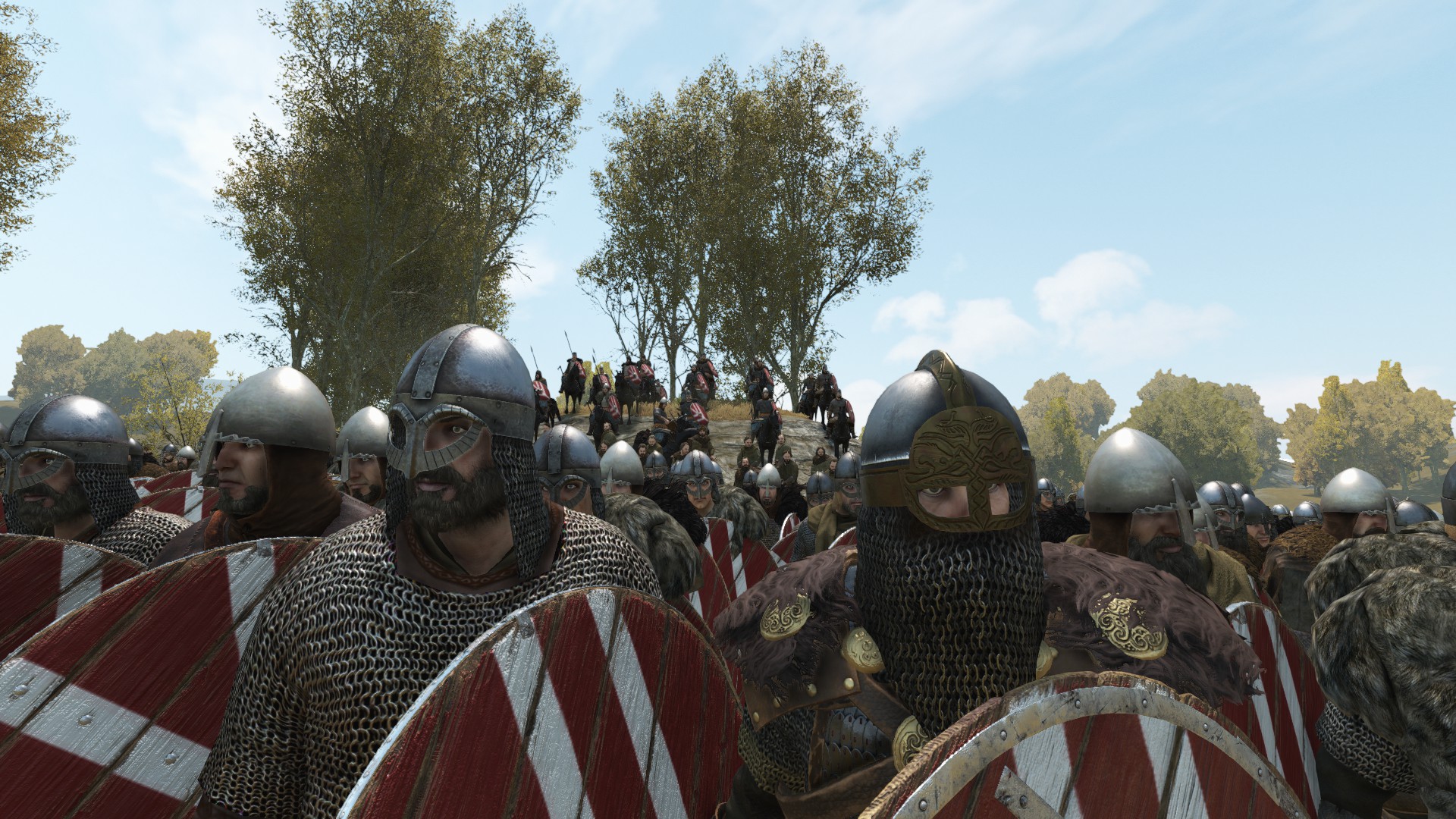 The Norsemen will be situated along the northern coast of the Sturgian lands in 2 cities 2 castles. If the vanilla concept of Sturgia is an adaptation of the Kievan Rus, this is an adaptation of the vikings of Scandinavia. I think I almost don't need to explain what these fellers are about but here we go anyway. They are closely related to the Sturgians but are not cut with the previous local cultures like they are. Their military strength lies completely in strong, fierce and competent heavy infantry. They lack any good ranged units and any good cavalry but can provide basic troops in said categories.

They will start out with 5 clans:

Some Norse names will be: 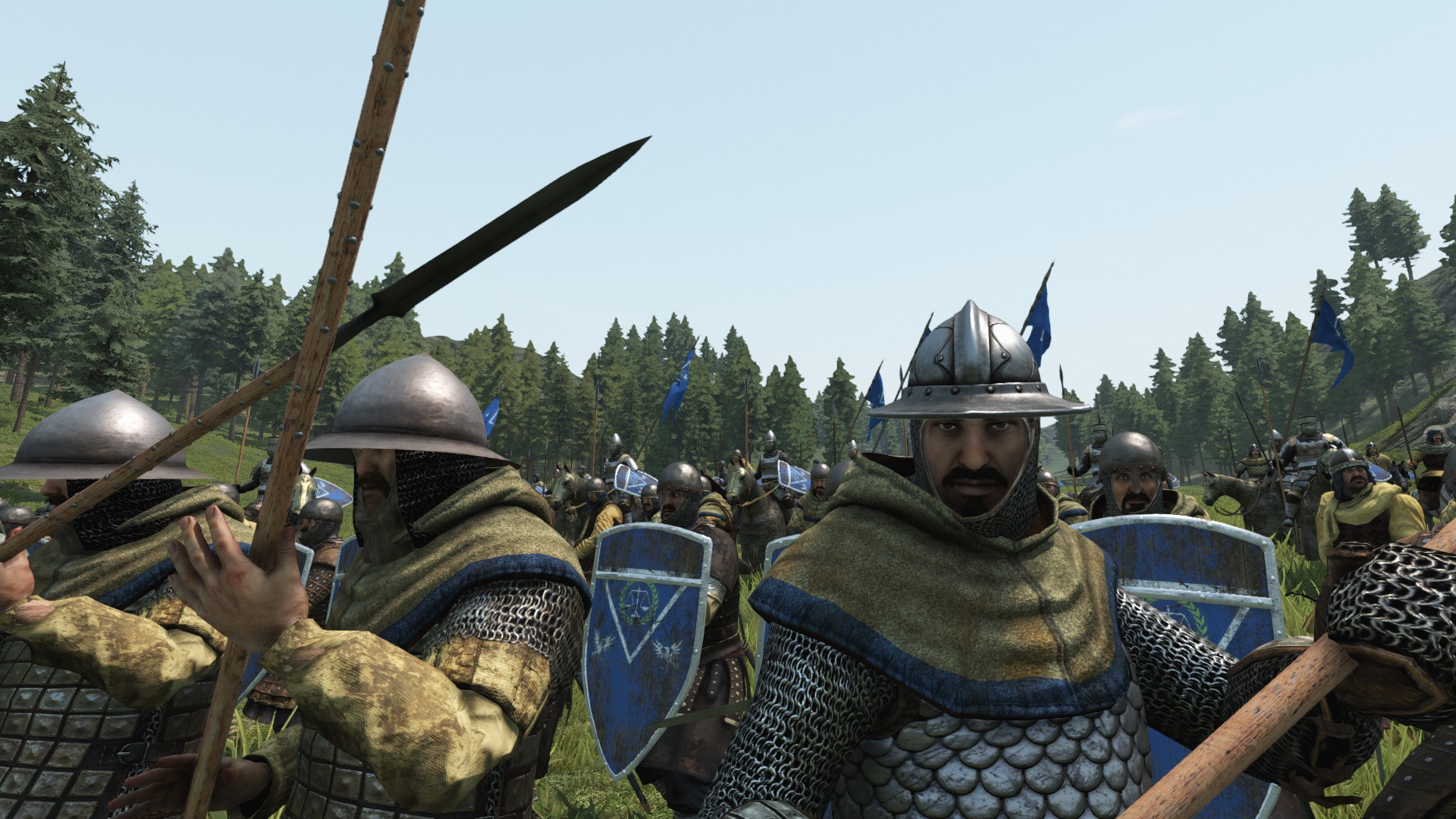 The Anean City States will be a new faction, located around the peninsula and landbridge between the Western Empire and the Aserai (in the area that is originally occupied by Garontor Castle and the villages Thractorae and Gamardan). They will start with 3 cities. They're an off-shoot of the empire, declaring themselves independent from imperial rule 200 years prior to the start of the game. So naturally, they are quite closely related to the empire, as far as their culture and military tactics go. Their main military strength is their powerful pikemen which fight in the front rank using bladed polearms that cause major damage to all but the most heavily armored enemies. They also have strong cavalry drawn from the noble population but only in limited numbers. Their weakness is their lack of strong ranged units, although they have the basics covered.

They will start out with 3 clans, with each holding one of the 3 cities:

Their king will be Daemos of the Valenthos Clan.

The Aneans will use the same list of names as the other imperial factions.

These will all be weaker kingdoms in comparison to the original, vanilla ones. Some of them will be stronger than others but they will all generally be on the bottom half of the spectrum. They will all be joinable like any other kingdom and will in general function the same as any other.

Another big part of this mod will be to split the vanilla cultures into more factions for everyone except the Empire, which is already fragmented. The idea is to have a "main" faction per culture with others existing in it's shadow without being too far inferior to compete with them. These main kingdoms will be reworked and renamed versions of the ones that exist originally, so all relevant lords and clans will go there with the new kingdoms having completely new ones. Some fiefs may switch owners and new ones will be created where necessary to balance things out. There will no longer be generic kingdoms with names like "Sturgia" or "Vlandia". Each one of these will be joinable as any other kingdom and will function the same as all the others, mechanically speaking. They will use the same troops, names and overall aesthetic as their original counterparts. So without further ado, here is the list of these factions as it stands right now:

The Manuhar Sultanate will be the largest Aserai kingdom and will be the reworked version of what is the vanilla faction. Unqid will be its leader and it will hold most of the coastal territories from Quyaz in the west to Hubyar in the east.

The Abbasin Sultanate will be the other Aserai kingdom and they will be located in what originally is the north eastern chunk of Aserai lands, from Razih to Husn Fulq.

The Mercian Kingdom will be the main Vlandian kingdom holding the central heartlands, from Ocs Hall down to Galend and Jaculan. Derthert will be their faction leader and all vanilla clans will follow.

The Valeric Kingdom will be one contender and will hold the southern Vlandian lands between Sargot and Charas.

The Calevin Kingdom will be the other contender. They will be located in the northern, mountainous regions from Ostican to Ormanfard Castle.

The Gruffendoc Kingdom will be Battanias main faction, led by High King Caladog. It will hold everything from Pen Cannoc in the west, up along the mountains going north east all the way to Flintolg Castle.

The Kingdom of the Highlands will be the only other Battanian kingdom, located in the north western chunk of Battanian territory.

The Druzhi Principality will the main kingdom of the Sturgians with Raganvad as its leader and all the vanilla clans with it. It will occupy all Sturgian territories east of Balgard.

The Paliski Kingdom will be the secondary Sturgian Kingdom, holding all Sturgian territories west of Ov Castle and Omor.

The Urkhanit Khanate will be the primary Khuzait faction, led by Monchug. It will occupy all Khuzait lands from Hakkun Castle and north to Dinar Castle.

The Kanukhit Khanate will be the secondary Khuzait faction. They will be located from Akkalat all the way down to the village of Erzenur. 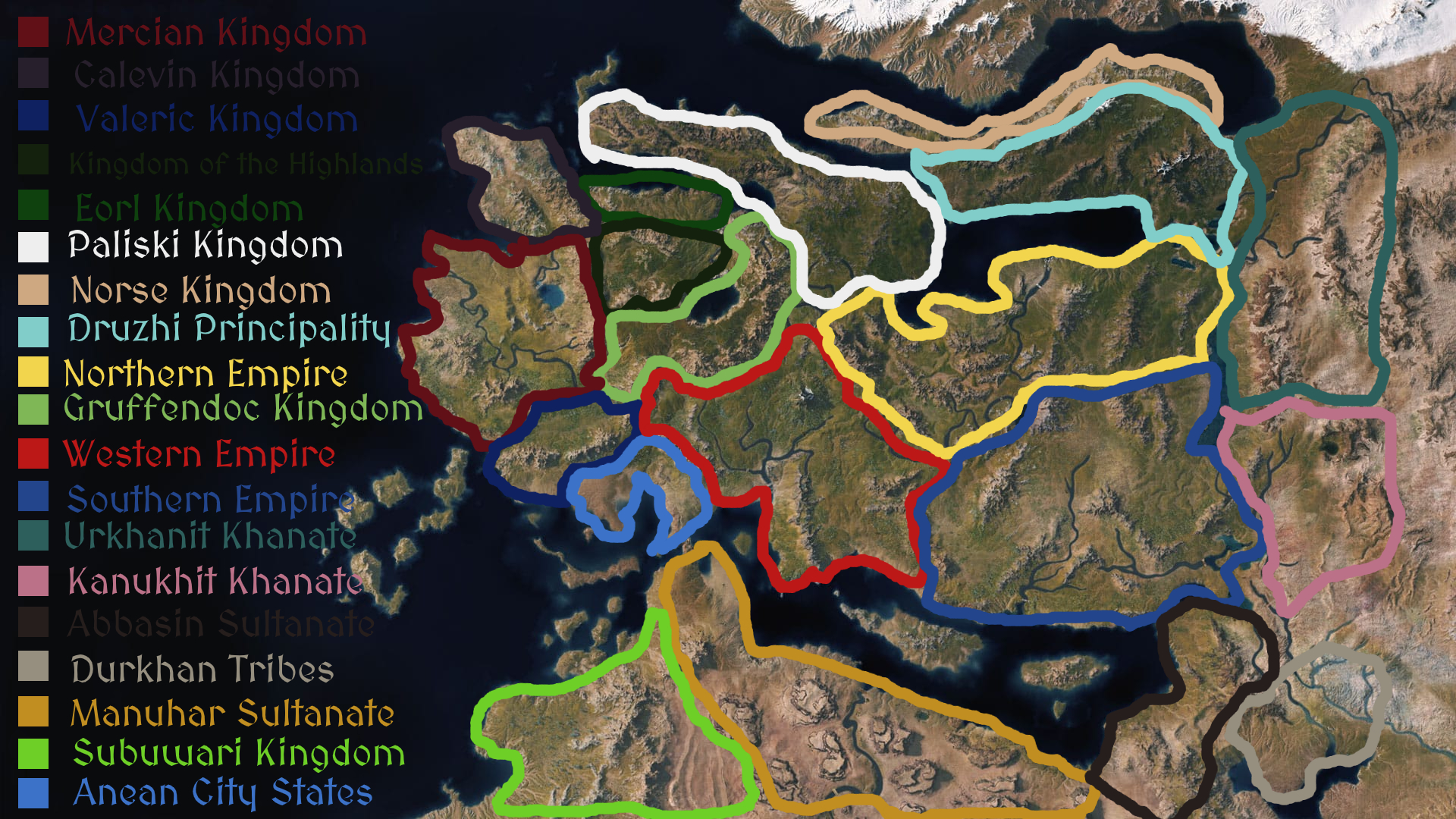 - Rework all major faction troop trees. Done, but implementation still needs some work.
- Create troop trees and troops for all new cultures. Pretty much done. Norsemen still need a noble troop tree and the Subuwari may need some more infantry types.
- Rework lord equipment. First pass done. Second pass probably needed.
- Rework all vanilla mercenary faction units. Mostly done. Jawwal, Brotherhood, Hidden Hand and Wolfskins still left.
- Rework any wonky vanilla weapons. Mostly done. Some may need new grips due to the misaligned hands on many of them.
- All the new lords and clans and kingdoms. Mapped out but not started.
- All the new cities and castles. Mapped out but not started.
- Rework all bandit troops. Mostly done. Sea Raiders, Forest Bandits and Steppe Raiders still left.
- Implement all planned mercenary factions. White Scarabs done. All others mapped out but not started.
- Re-sculpt any dumb looking lords and all midget male imperial lords. Started but not finished. Should be easy though.
- Address the tournament and arena equipment in some capacity. Removal of ranged weapons planned. Possibly mounts too. Unsure at this stage, just know it needs looking at.
- Rework facegen for all cultures. Will probably do this but I'd need to see if I can even make it better.

- Address diplomacy and try and make it less dumb.
- Fix Pricing mechanisms.
- Add more companion archetypes.
- Touch up areas of the campaign map.
- Increase average party sizes.
- Make taxes more rewarding.
- Make and implement new (field) battle maps if TW never does it.
- Allow players to assign their characters to one of the new cultures in the character creator.

And that's all that I can think of right now.

Want to help out?

If you're liking the ideas I'm putting forward and the look of things I've done so far and want to help out here's a couple things this mod could benefit from:

Anyhow, that's all I got for now. Hope this answers some of the many questions people have had so far.

Wow! Concepts and features seem awesome! It'll be really nice to see those new kingdoms and cultures. Keep up the good work, looks great so far!

Hmm, just copying Rohan will probably break the immerssion for a lot of people. Have you considered changing the names of the stuff? Maybe base them of Herules or some early medieval german tribes?

There's plenty of lore being created out of thin air to explain the origin of the Eorlings (who while clearly inspired by Rohan, are not a copy paste version of them), so there's more thought going into this than you might think. The actual art direction of their units may change somewhat as well going forward and the banners you have seen so far will 100% be replaced before release with original ones.

have you considered maybe a greek themed faction? might be hard to texture their armor though.