As featured in the illustrious Computer Music magazine, we give you a brand new preview of the Frozen Synapse soundtrack... 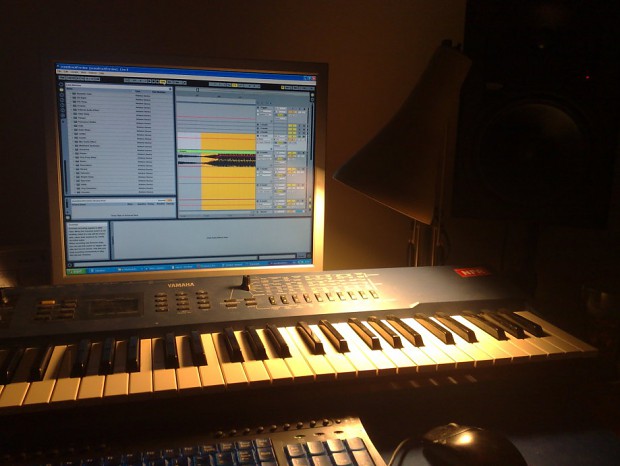 After many months of slaving away in here, the Frozen Synapse soundtrack is nearing completion. Here's a long preview of what it sounds like:


This was all written by myself. My role as "business guy + art director + musician + sort of single player sub-designer + sort-of-producer + guy who brandishes the QA whip" is often fairly bizarre, so it's good to actually focus on music exclusively for a while.

I wanted to do something that was "soundtracky" without being bland or just full of loud atonal banging noises like a lot of action game soundtracks. Also I wanted a very synth-oriented texture with some nice warm sub bass and quite punchy drums - I hope I've achieved that.

I'll be making ambient stems for all of these tracks to go behind the planning stages in-game so it's not too obtrusive, but you'll be hearing these full mixes during action and playback moments.

I use a lot of the internal Live effects - I'm a particular fan of the Erosion effect as you will no doubt hear!

I've really invested a lot of time and effort in this soundtrack and I hope it serves to add a huge amount of atmosphere to the game. We're currently working with a new concept artist who is a long-term friend of mine, and I think his art coupled with the music and also the new single player stuff we're doing will add that necessary layer of immersion.

If you'd like to get hold of this soundtrack straight away, you can get it by pre-ordering the game and buying the Premium version on the far right. If you're an existing customer and you need to upgrade, then try this link.

In other news, Robin has been working very hard on the single player missions and by the end of the day we will have the first draft of the campaign. This will need some extensive work next week in order to figure out what we've got right and wrong about the structure. From there, it will be on to tweaking the individual missions, refining the difficulty curve and writing all the text and dialogue needed.

Ian has both worked on a new mapgen (as you can see from our previous news post) and started work on overhauling the YouTube export to make it a bit better. Hopefully that will be sorted soon.

Very busy times here but we're getting more and more excited about the forthcoming release of the game next year.

In order to add insult (no, that's the wrong word) to my current workload, I'll be speaking in Leamington at an IGDA event organised by Blitz Games next Thursday. If you are around then please come and say hello.

The opening track (some Mirror's Edge influence here), and the one that starts at 2:51 are particularly good.

Drums are a little bit early 90's for me, but that's just a taste thing rather than a criticism! The only other thing is that the brass sounds a bit cheap (compared with the production values of the rest of the music), but that's an Eastwest thing, as their library is now really really dated.

All in all, a great preview, look forward to seeing how the game turns out.

Those who like this should check out the Welsh group 'Hybrid' and their work with renowned film composer Harry Gregson-Williams.

Thanks! Any brass library tips? I'm slightly of the opinion I should swap out that particular sound anyway.

If you have the money, get Symphobia (it has the exact kind of sound you are looking for).

If you don't, then get Orchestral Brass Classic

No other libraries really come close for that big sound. Their demos should tell their own story, but if you want me to hear demos from a real user (i.e. me) contact me privately.

Thanks for that - yeah I have considered both of those but they're a tad expensive.

As I'm using it as a layer, it's something I'd only expect other producers to pick up. I've heard *horrible* orchestral patches in pretty mainstream soundtracks so aiming slightly above that level is all I really cared about. But yeah, if I have time I might try some swapping out.

You make a VERY good point about bad orchestral sounds being used in mainstream games. It drives me crazy!

My criticism was a minor one as you are right, most people won't notice it! Incidentally, the EW patches aren't horrible, they're just not as good as other alternatives. You'll be absolutely fine with what you've got. You just got a critique from someone who is obsessed with production values!! Haha.

Hey there, if I am already a premium, will we be getting the email, or was it included in that initial .zip way back when I preordered it? I hear some tracks in the preview I haven't heard before. Just wondering :)

Sounds absolutely orgasmic, by the way.

Aha, nevermind to that. Downloaded from the old link, has new tracks :) Thanks so much! they're sounding great

Cheers - glad you found it! Yep, if you're a Premium pre-order customer then just re-download the music pack from the original link you were sent when you purchased the game.

I'm normally not a big fan of this sort of beat-heavy electronic music (When I listen to electronic music it's often a lot more minimalist), and yet I found myself enjoying the tracks I was listening to quite a lot. That's a good sign that these are some high-quality compositions!

Dude.. I would think Some small vocoder stuff would work awesome in some of the tracks.. only some small background stuff would be awesome! That's just a personal Idea though, I generally like to use stuff like that. I am also thinking that maybe some more upbeat stuff would compliment the game well? That there could be one or two up tempo action-y DnB-y tracks that would contrast to the very very ambient atmospheric music (which is awesome I might add :) )? Just some (stupid) Ideas I thought I'd through out there :).