An update on the new system layout that will be incorporated for the Tides of War galaxy.

Tides of War blog readers! Did you miss me? Did you? Admit it, you did. You've missed when I show up and have something tangible to tell you guys.

As the rest of the guys have something cool to talk about, I haven't exactly had much. It's not that system development isn't fun, but I would end up like a tired old record if I posted every time I finished a system.

It may have taken a while, but finally there is some worthwhile news. In fact, pretty darn big news. Of course, those of you who skip the text and just look 'ooh, pictures', you've already probably realised what this is about. For those of you who did that - shame, for shame on you. Those of you who read. Good on ya's! I'll reward you with ending this semi-chatter session and getting to the good stuff.

This will either lead to applause, or a severe lynching! The Development Leads recently have been discussing their own thoughts on where do the Force Users fit in for 2.0. Right now, at least on the International server, it is like they number in the plenty and run businesses and their own private army.

With the roll back in the timeline and the reset, the idea came that it would reduce both back to a point where there are limited numbers. (Granted, the Sith weren't known to be around at this point, but not impossible. I have a story in the line to twist that around.) This would go hand in hand with the Force Users having such a limited shiplist, and how they won't be involved in the TE cycle.

We ran with the concept of returning the Force Users to something similar to now, just one base. But at the same time, we didn't want to strip the individuality of either. We want the Force Users to still have a choice. Nine times out of ten, they will most likely be aligned with their respective major faction. But we want to cater for that one time that they may not.

So each will have their base in a separate system. The Jedi move from Dantooine to Yavin to be based in Yavin IV. The Sith remain on Korriban in Horuset. Of course, nothing is totally final in regards to the set up of the Force Users, but it is blending that way given how all the pieces of the mod are coming together thus far.

The rest of the changes to the system layout came after much discussion, debating and throwing back and forth. The final product, we feel, is a better design for our galaxy that was universally agreed upon. Obviously, this will probably require some re-thinking on the economy front. But given that we are still at the idea stage for that, it isn't that much of an issue. 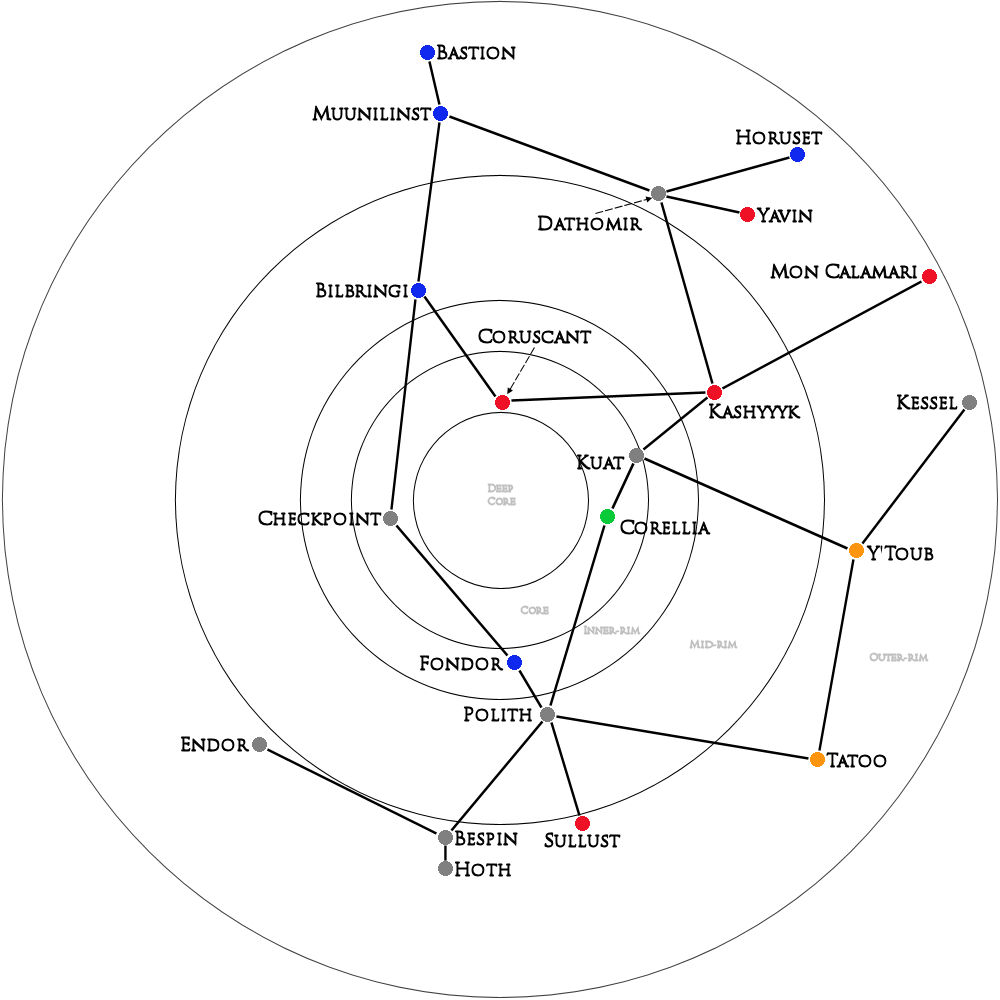 Below is a list of the changes that have been conducted, plus the reasoning behind.

Removed:
Dantooine - The Jedi were nowhere near Dantooine at the this point of the timeline. It made little sense to return them to a place they were in the Knights of the Old Republic era. The decision was made to move them to Yavin, where they were based around 15 ABY. The two modular stations near Dantooine, will be moved to Coruscant, to replace the need to be designed NR Fleet HQ and Space Academy.
Alderaan - While the system has silverscreen significance, it is pretty much a boring system. There isn't much going on and, despite the best efforts of Sushi and myself to make it sparkle, it remains dull.
Beshqek - Despite being more interesting than Alderaan, the consensus was to drop it with Alderaan, due to both holding many similarities.

Added:
Fondor - We came to the decision to give both the Galactic Empire and the New Republic a more southern system on the map. Fondor was the best choice for the GE, and adds another shipyard like system to the equation. Modular bases, that I spent a lot of time building in Beshqek will likely be re-used, because I don't want to waste cool bases!
Sullust - There were a number of choices out there, but we decided to go with Sullust. The system is interesting, has a number of planetoids, and has interesting exports for a war effort. It was the best choice for down there.
Dathomir - With our new rough concept for the Force Users, Sov and myself agreed upon the idea of having a junction system that would have both Force User home systems branching off of. Like a number of the new systems, Dathomir is rich with addable content for the design.
Polith - The name itself might confuse people, but it is the home of Thyferra. This is the home of the much needed 'bacta' to the war effort. It has always been a choice on the list for future usage and given that we basically are a game about wars, there is always a need for medicine. It offers great usage as a trade point.
Deep Core/Checkpoint - Sov came up with the idea of having a small checkpoint between Bilbringi and Fondor. Why? Because that route goes directly across the 'Deep Core' element of the galaxy. To make it in one jump is a bit strange. So the concept of a small Checkpoint came to fruition.

Sov drew up how the new map will look, for visualisation purposes to show the new changes. The final product sees ToW gain two more systems to the overall count. Of course, there was some discussion about retaining Beshqek and Alderaan.

At the end of the day, they have been held because we don't want to overpopulate the map for the start. This current layout, and the connections from system to system should ensure that all systems are used. Not like currently where systems are generally left unused because they have no real significance.

This is pretty much our final layout. Although, there could be some minor changes in some of the system connections as we look to ensure total balance. But I wouldn't expect too much change from the one posted above.

sounds good, and i highly doubt any one will miss Alderran

Yeah, that was one of my thoughts behind it. It has silverscreen significance, but there is only so much that one can make interesting with an system like that.

And of course, it probably wasn't helped by Alderaan being pacifists in general, so it's not like they would have much in the way of a floating remnant of a fleet hellbent on payback.

Way down the line, we can always revisit this decision. If the mod is popular enough and becomes busy enough to merit expansions, there is always a possiblity that Alderaan could be included, providing we find a decent usage for it.