A small look into the fighter combat in Freeworlds: Tides of War

A Squadron of Tie Defenders come into your view, your in an X-Wing. Your ship is said to have the perfect balance of speed and power. Your a great pilot, and you know it, these Tie Defenders are dust. Just one problem, this is Freeworlds Tides of War, and is different than previous versions from the past. So you start your run, then you try to kill your engines, that doesn't work, then you try and box, but as you move around in a sporadic motion, a Tie Defender starts removing your shield.

Then one of the Tie Defenders gets on your rear and shreds you into pieces. People around you get quiet, this is the release of Freeworlds Tides of War, and you just got blown to pieces by what many thought, was an easy NPC. Suddenly a very real fear comes over you, you realize you will need to learn something different.

This article hopes to help you, to give you a preview of whats to come. Freeworlds Tides of War makes the impossible, seem possible. It gives us one of the greatest space flight simulators seen since X-Wing Alliance. Every ship is unique, every weapon load out different. It doesn't feel better, it just feels right.

With advances in knowledge of the Freelancer engine, the FW:TOW Team has made fighter combat one of the greatest things to grace Freeworlds. Now, if you have missiles loaded up, you'll know it, because your ship will be slower. If you reverse thrust your ship will slow down just enough to let you out turn you opponent, and oh does it feel so good! 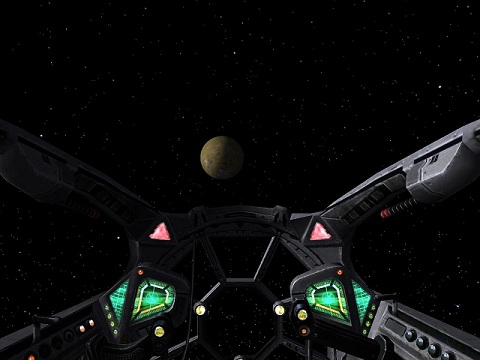 Energy Usage will now have to be managed, no more spraying lasers across the field. After a minute or so of holding down the firing button, you'll have no energy, and it does not recharge in a matter of seconds. Skill, tactics and timing will now play huge role in combat. You will not only have to be a better pilot than your opponent, you will also have to be smarter.

Today, I present to you a video, with different examples of fighter combat with different ships. Each ship, (Every ship in FW:TOW for that fact) is different in terms of the way it handles, its shield, hull and firepower. The turning, is simply put, amazing. Instead of swaying from side to side, you will carve through space like a light saber going through butter. It feels natural, and it puts you in a place none have been to.

(re typing cause the forum ate my post) So, I loved the original freeworlds, but found the rp community a little too much for me. Will there be less faction intensive, more casual servers running this? Also, will there be any context sensitive music in the game(i.e battle music during combat, but not during exploration)?

Sorry for the double post, i guess the forum didn't eat it lol

Not sure to other communities being made. The developers plan on making FW:ToW much more RP orientated than the current rendition. We will be including the things needed for people to run their own servers, so that might be something you're interested in.

As for the music, yes it will be. We have entirely new music for the mod.

Thanks Talon! Lovin' the stuff from the FS Mod, too!

Speaking as a person who played Tie Fighter as a child, an early Freelancer player, and at one point in time a regular of Freeworlds, I personally cannot wait to see this mod in Action.

For some reason Lucas Arts has taken a disinterest of reworking or re-releasing their Space Simulator games that have helped make the Star Wars Universe as popular as it is today, so it's left upon you creative and skilled modders that make what used to be regarded as just a dream become possible.

Not only does this mod make the Star Wars Universe look perfect in it's own right from the space flight perspective, the fact that you guys are finding new ways of pushing the old Freelancer engine to it's limits (especially in ways that other modders of this game thought it was not possible) make this one of the greatest mods i have ever seen.

So i wish you all great things, and again, i cannot wait to see this mod in action, to hop on a Tie Advanced(Avenger) or a Tie Defender, and blast some Rebel Scum out of existence.

We really hope to bring the great times of XWA back with this mod. A lot of our inspiration came from it :)

Thanks for the compliments.