My current progress on Black of Space's Fleet combat system.

Posted by masternerdguy on Aug 8th, 2010

Fleets
Most RTS games give you the option to group units so that those groups can be selected quickly and easily during a combat situation. BoS has an even greater need for fleets, because coordinating combat across hundreds or thousands of kilometers is not very "zoom down and micro manage" friendly.

Fleet Structure
At its most basic, a fleet is merely a collection of units. This in itself is a powerful management tool, but BoS fleets are much deeper than that. The fleet system is inspired by an EVE Online style one in which a fleet commander calls targets for all fleet members. When you promote a fleet member to FC (fleet commander), you are giving them target calling power over every member unit.

Keyboard Shortcuts
The Ctrl Key combined with keys 1-9 allows you to easily select 9 groups of units. Possible uses include:

In addition, I have added Ctrl-A to grab every unit you have constructed. 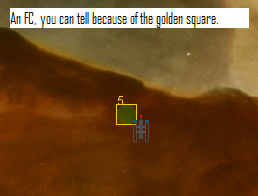 Future Additions
Fleet structure is not finished, it is my current project. FCs being able to call targets for individual units is great and all, but hardly ground breaking. I want to expand the FC's repertoire.

I want the player to be able to specify various levels of automation through the FC, like permissions. You will be able to give the FC permissions such as:

Finally, I want the FC's target calling preferences to be more intelligent. I want it to be able to either call targets top-down (kill the largest stuff first) or bottom-up (kill the smallest stuff first) at the player's discretion.

How about having the FC's be able to coordinate themselves. For instance, all FC's that the player has specified to partol will coordinate with each other to make sure that their patrols do not overlap, or if they do overlap, they overlap at different times. Or if you have two FC's that you have specified to raid enemy resource operations, they would both coordinate their scouting parties, coordinate the attack, reinforce one another if necessary, set up traps together (like one goes in to aggravate the enemy, then retreats right into the other FC's fleet). All of this could be tailored to the players desires, with minimal coordination, to such maximum coordination, the two FC's hardly do anything without working together.

Another possible area that you could give players control would be reinforcements for FC fleets. For instance, the player would be able to devote a percentage of their entire resources to FC's who may use the resources for whatever the player has specified, from replacement of lost units, to construction of totally different units if the FC decides to attack differently than how his current fleet can. Hell, maybe even allow the FC's to research stuff from as little as upgrades to existing units to full blown researching whole parts of the research tree if they want. And of course the player would be able to set how much or little the FC can do. Maybe they can only replace existing units and build more fighters. Maybe one is allowed to research anything pertaining to stealth and detection of the enemies. Maybe one is allowed to build and research stuff about stations and resource collection.

If you do get into FC cooperation this much, it would be good if the player had some way of seeing what the FC's were doing. Why is this one building a bunch of bombers? Why is that one researching anti-cloaking sensors? Why are these two attacking here instead of there? Etc.

interesting ideas, that is a LOT of coding (getting AIs to operate together is not easy, but doable).

I would never give the FCs control of my researching process (the player has to do SOMETHING), but some cooperation could be useful. FCs arent like subordinate commanders in supcom which automatically rebuild structures/units when they die, they're more like an Admiral of a fleet who can make choices as to what the fleet does.

I'll see what I can feasibly do. Ty for the feedback!