Well it is that time of the year once again, (it sometimes amazes me how quickly they seem to fly by, must be getting old) and another ModDB Mod of the Year Awards is upon us. A great opportunity to reflect on the year gone by, and to also look to the future. So without further ado let me take you through what First Strike has got up to during the year of 2010.

Well it is that time of the year once again, (it sometimes amazes me how quickly they seem to fly by, must be getting old) and another ModDB Mod of the Year Awards is upon us. A great opportunity to reflect on the year gone by, and to also look to the future. So without further ado let me take you through what First Strike has got up to during the year of 2010.

As anyone following our progress will know, 2010 was the year we released the latest version of our mod, 1.5 which saw the addition of new maps and many new assets and features, but more on that later. 2010 has proved a difficult year for the First Strike development team, right from the beginning we had suffered from dwindling resources and low numbers of members on the team which was making progress on the mod difficult. We determinedly pressed on hoping to release 1.5 at the end of last year, but at the eleventh hour decided that there were some fundamental problems with the gameplay design of some of our new assets, and the release had to be put on hold. Now this was seriously problematic as some of our key developers only had limited time and we were trying to get the work done before that time ran out. So having to halt work and take a step back and re-evaluate at that time was a serious blow.

However these things do happen for a reason, and while these gameplay re-designs were taking place it allowed further polish to be applied to other assets, and for new assets to be added to the mix that would further enrich the final product. These bonuses included having the time to add key assets such as the Sentinel, a model we had had waiting in the wings for years (one of the first models I developed for First Strike in fact) now had a chance to shine in a map that could almost have been designed specifically for it. This ship would go on to be a firm favourite with players with it's capability to transport large numbers of troops swiftly across a map and deliver a serious punch to enemy units on the ground, and yet still manage to not feel overpowered with the enemy having many weapons at their disposal capable of hurting this massive ship. Add to this a detailed interior which can itself become another combat environment in its own right once the Sentinel sets down in a hot LZ, and you've got masses of gameplay potential oozing out at the seams. 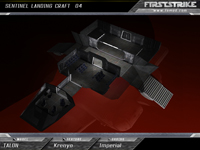 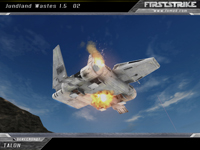 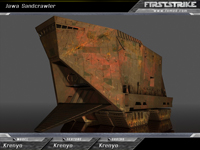 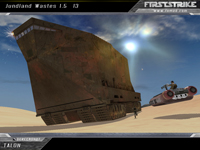 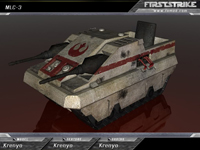 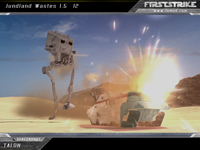 The other new vehicle to come out of this period of development early in the year was the MLC-3, a Rebel mini tank that packs one hell of a wallop, equally effective against infantry and the ever looming shadow of the Imperial Sentinel. When added to the AT-PT Walker and the Jawa Sandcrawler, the result is a map (Jundland Wastes) which would prove to be chock full of unique assets new to First Strike and would make this map a joy to play. Further appeal was added by the fact that this map would be one very closely aligned with events from the Star Wars movies. We already had Battle of Yavin and Escape from Hoth featuring specific movie events, but Jundland Wastes would feature key Tatooine locations that would get Star Wars fans all nostalgic such as the Sandcrawler, Tosche Station and the Lars Homestead, all lovingly recreated as accurately as possible to give players the feel that if you'd arrived in the map five minutes earlier you might have just caught Luke Skywalker before he jetted off in his landspeeder.

So with all the key elements in place from then on it was a period of balancing this massive number of new assets into a cohesive whole which would be in keeping with the gameplay style of the rest of the mod, and also making sure that the map's gameplay design was sound so we could get the most of the open world feel that that map needed, and yet still maintain enough focus in the combat so that everyone wasn't too spread out across the map, no easy task. 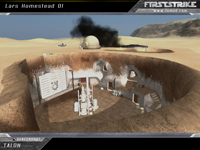 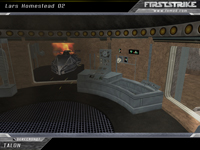 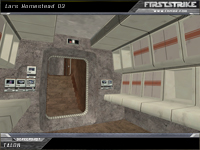 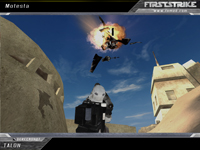 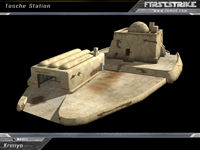 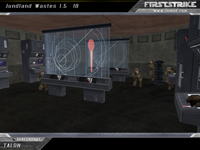 While all this was going on other developments were also taking place. To make this a release well worth the wait we began to work on integrating the singleplayer mini-mod developed by FSDev Dnamro into the mod proper. This didn't just mean adding the singleplayer maps to the mod, but actually the commencement of a much more involved process of improving the AI and navmeshes of the maps currently included, and in the cases of maps such as Battle of Yavin a great deal of work went into them to get them to a high standard which we were happy to add to the mod. FSDev Twigs did a great job of building on what was already there to create some genuinely challenging AI to play against in singleplayer and co-op modes that really gives a lot of additional value to the mod with hours of fun to be had before you even go on-line to hunt for other people to play with.

In addition FSDev Twigs gave us his love note to the X-Wing vs TIE Fighter game series with his space map Strike at Parmel, the last feature we revealed before release. This fun space map does away with the often objective based nature of our other space maps in favour of an enjoyable space deathmatch where your only focus is to kill the enemy more times than they kill you. Add to this mix a cool space station and other obstacles to weave around as you try to shake the enemy on your tail and you have dogfight nirvana. 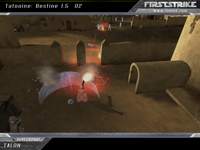 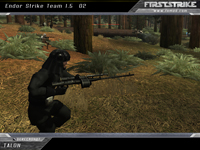 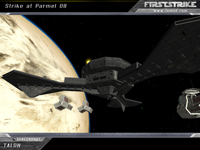 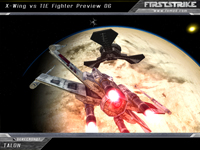 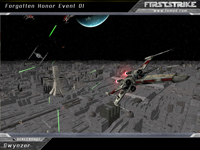 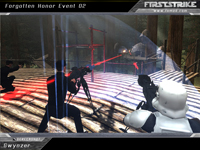 At last in August we were finally ready to release First Strike 1.5 to the public, and it was a successful release with many new players checking out the mod and enjoying the experience of playing in the little Star Wars sandbox we'd created. Unfortunately as luck would have it, the week of our release the EA Masterservers had a serious breakdown, the result of shifting the servers to a new location. This disruption of service created crashes, disconnects and more problems than I care to mention here for all older BF games including BF2 and BF2142. Which obviously didn't go well for us as a lot of people new to the mod will have assumed that the issues they ran into were a result of playing First Strike, which clearly was not the case. However as with all new releases, mod or commercial games for that matter, there were a few issues that needed rectifying post release, and these were dealt with in a timely fashion via our Launcher/Updater facility as well as any gameplay balance tweaks we felt needed to be made once we saw the game in action on public servers.


Now as the year draws to a close things have quietened down a little since the release and we need to address that. The bizarrest thing is that every new person who tries the mod loves it and states as much either on our forums or over on ModDB, their only complaint is that they can never find anyone on-line to play with. Spread the word about the mod, good word of mouth is invaluable, the more people who know about the mod and download it and try it out, the more potential players out there. Go and sit on a server for a few minutes and they will come. Better still organise events like the very successful Forgotten Honour First Strike Event last weekend. The event server was busy with fantastic and fun games going right through the night, showing off the mod at its best with servers full to capacity giving rise to that epic Star Wars battle feel that is exactly what you're looking for out of a Star Wars game, mod or otherwise.

Check out the following link for in game footage from last weekend's event:

So that draws to a close our little introspective of First Strike in the year 2010, a difficult year, but also a successful one with some great new additions added with version 1.5. If you'd like to see more then your support is always appreciated. Download the mod and try us out, and if you enjoy what you see cast a vote for First Strike.

Great article! Best of luck at this MOTY!

Cheers fella, back at ya and the ToW guys.

Been following since the start, although forgot to bring the diss to uni with me :(

Watching the live stream now, its all good stuff, and still pretty active after like 7 hours of the event :P, I can remmeber playing some days with 3 or 4 people and still have a blast, however it was always good in the earlier releases whent there were fuller servers.

I always hope for a hoth map tbh, I reckon that would draw some attention ^^

This mod was so ******* cool when I played it. Do people really play this? When I had it was always empty. How are things now?

Saturdays and sundays always see some players (from 1900 GMT onwards). Week days are hit and miss. A lot of people don't like to wait on a server for someone to join in. Usually you find if a couple people start populating others soon follow.

The Hoth map is the next thing on our to-do-list, we've done a lot of development on it over the years, but it is such a massive undertaking that it is tricky to pull off with our currently limited resources, but with many parts coming together such as working Imperial AT-AT Walkers and an extensive Echo Base already well under way, we really just need to focus and get all these elements completed and blended together to form a cohesive whole.

We're getting reasonable numbers at the weekend, but we really need to push and get more people playing this mod regularly, I too long for the time when you can just fire up First Strike any time you want and find a full server. We hope to see that again soon. Spread the word about how good First Strike is, and let's see those servers fill up again.

Whats funny is that with 1.5 we were able to fix a couple of long time issues that people had complained about. The rebel medic droid for example always appeared with the Imperial symbol. This meant other rebel droids attacked it and that the Imperials could see your droids tag and detect where you were. That no longer happens. We also added bonus scores for destroying the Yavin deflector towers and the trench exhaust port. This rewards those y-Wing pilots who often felt done by because they were unable to get decent kill streaks and therefore lost points. We also added point awards for essential objective objects in other maps. These all add to the gameplay yet we've seen very few people comment on them.