I wanted to take a moment to talk about the actual run-up to launch, and how I will (hopefully) be better prepared next time!

It's been a long time since I've posted here, so I've got a lot of ground to cover. My last developer update for Fatty Rabbit Hole was over a year ago - in May 2016, when the game was only a few months into development, and was just beginning to transform from an HTML5 browser game into something more.

To make a long story short, I worked on Fatty Rabbit Hole for many months after that, adding new content and improving the existing stuff. During this time, my "day job" was working as a contractor for another game developer, Exploding Tuba Studios, helping them with the graphics pipeline on their first game, Divide. In the fall, work with Exploding Tuba started ramping up. We attended PlayStation Experience in December to show off the game, then worked long hours into the new year, up until and after the release, at the end of January. I felt considerably burned out after that, and concentrated on some of my other graphics work in the meantime, taking a break from game development for a while.

Back in August, as we were hunkering down on Divide, Fatty Rabbit Hole was quietly approved on Steam's now defunct Greenlight program. I was, of course, excited about this - but had no time to act on it while we crunched towards Divide's release.

In March, I slowly began picking up pace on Fatty Rabbit Hole dev again. Not much was left for the game, but after having spent so much time away from tinkering with it, it took a considerable amount of time for me to re-familiarize myself with the project. Weeks later, I was adding the final content to the game, and starting to think about creating assets for Steam, and beyond.

When your game is accepted into Greenlight (and, I assume, Steam Direct), you are required to fill out some forms so that once your game is available to buy, Valve can pay you properly. One thing that they mention very early on in the process is that you may want to submit the game as a company rather than as an individual, and this was a very early stopping point for me.

Since 2013, I'd been working as a freelance contractor, doing graphic work and product renders, alongside my work with Exploding Tuba. I'd been thinking about forming a proper company for this work - in order to better manage my income and help protect myself legally, in case things went horribly wrong - but I'd never gotten around to actually doing it. This seemed like a good excuse to finally go ahead and make this happen, so in July, I formed Massive Catapult Creative, Inc.

This process took a few weeks, and once it was finished, I was finally able to finish the paperwork that Valve sent me back in August 2016, when Fatty Rabbit Hole was initially greenlit. After that, it was time to jump into Steamworks to start preparing for launch!

Implementing Steam-specific functions, such as leaderboards and cloud saves, was surprisingly easy. It only took a few hours of work and testing to make sure everything was set up and working properly. Between Valve's documentation, their support community, and the YoYo Games tech blogs, pretty much everything was covered.

The amount of content one has to create to launch a game is daunting. There are many, many promotional slots that need to be filled, with all manner of images, videos, and text. Luckily, most of the graphics I'd created for the game could be re-purposed for this use, and since almost all of it is vector art, it could all be re-sized with no loss in quality. Being an artist/graphic designer by trade,it was relatively easy for me to whip up the necessary items - but it took a lot of time, and wasn't particularly fun. I decided not to set an actual launch date for the game until I was almost or completely done working on promotional media, so as not to put unnecessary pressure on myself.

I spent a a day or two ironing out the text/descriptions for the game, leftover from the Greenlight campaign. I'm not uncomfortable with my writing, but coming up with interesting promotional material is not my forte (and it shows).

After that, I moved onto creating most of the imagery needed to fill out the various requirements of the Steam store page. This went by faster than I expected, mostly because of my experience working on web banners at a previous job.

Finally, I had to make a launch trailer, since the old Greenlight trailer featured a lot of out-of-date captures of the game (and I never really liked how it turned out). After a few days of solid video editing, this was the result:

It could probably be better, but I'm pleased with this overall. It features lots of actual gameplay and, I think, shows off the game's diversity of play. I'm happy with how the music synced up as well.

Of course, some parts of my pre-launch work turned out to be fruitless.

I spent a lot of time making community items for Steam, such as trading cards, emotes, etc., only to learn that, due to abuse by people acting in bad faith, are not available to implement until the game passes certain performance thresholds in the store, and Valve is confident that you aren't scamming the system.

I looked into getting the game rated, so I could more accurately let people know what sort of content is in the game, but the ESRB seems to have taken down all the tools they posted a few years back to help indie developers self-rate their games. I don't know why they removed these tools, but I can only assume it was also because of people abusing them.

In the end, I decided not to spend much time on actually promoting the game. Fatty Rabbit Hole is a small-ish game, and was never meant (or expected) to be a giant release - and it has a small, but relatively built-in fan base due to its being based on some characters and jokes from a relatively popular podcast, Matt & Mattingly's Ice Cream Social.

Ultimately, doing the actual grunt-work of promotion on social media and around the web, after having created all the promo materials myself, was too much for a one-man shop. I hate to say it, but it would have taken up too much of my time. 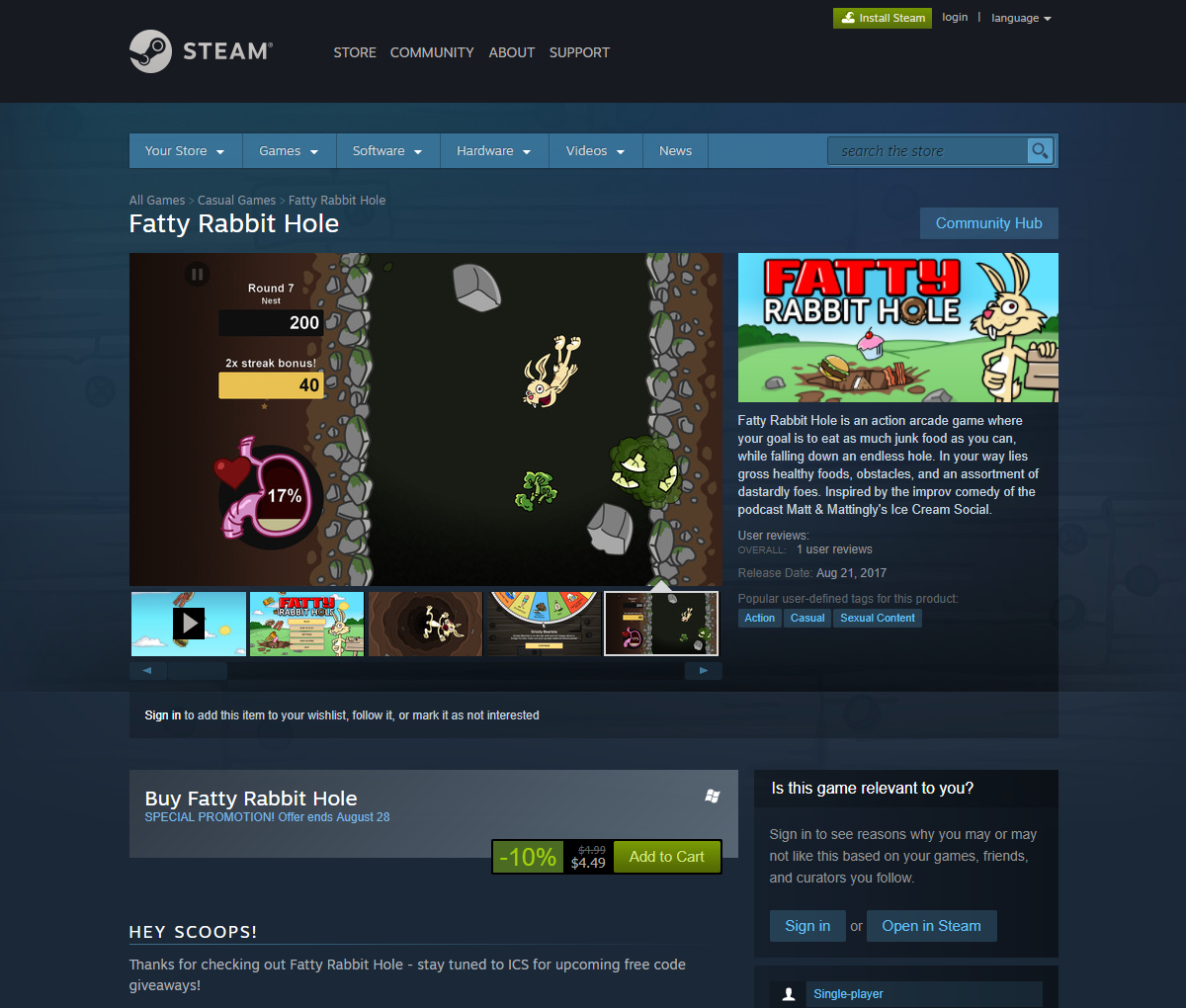 After all of this, it was somewhat cathartic to wake up yesterday, eat a quick breakfast, and then push the big, green publish button.

I freaked out a little bit after a few hours had passed, and I found my support box filling up with messages - but so far, thankfully, these have all been solicitations for game keys from various game streamers.

Publishing Fatty Rabbit Hole has been a fun, interesting, and educational experience for me. I don't expect it to be a giant commercial success, but it'd be nice if I could at least make back the money I've invested into the tools to build it.

Even though I'm no expert, with a single game published thus far, I'd still like to share a few things that I'd try to do differently, for the next time around:

I'm sure there are plenty of other things I could have done better, and I'll have more lessons to share next time. That's all I've got for now, however, and I think it's about time to wrap this up so I can get on to the next big thing: Fatty Rabbit Hole for Android, which is currently in beta testing.

If you have any questions for me, please reach out - I'll answer whatever I can. Thanks for reading, and I hope you like Fatty Rabbit Hole!

Thank you for sharing your experience and congratulations for shipping your game!