Gappu Episode 1: Ninjas took my boss - is now available in downloads section. I have been hard on the case of implement some last minute difficulty changes for slightly easier gameplay, so that everyone can finish to enjoy full story ;)

Other than the previously announced changes from beta testing there are also following addition: 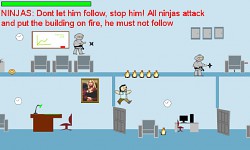 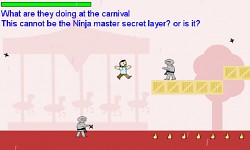 
This doesnt mean that release is 100% bug free. There is still no wall jumping animation.. and not very well implemented too.. (its actually a bug). and sometimes the hero does get stuck in between walls.. but i have learnt my lesson with this episode. But considering this is a small game, so u can probably end it without much game breaking. And don't worry these will be fixed in next episode. For now enjoy this episode. Do post comments of how you like it.

Menu is nice, but collisions are killing this game, srsly