A general Idea of what you should expect from Ethereal Muse's Encore! and how to prepare for its up and coming title.

I had a long conversation with Ryan Anderson, Executive Editor of ModDB. He is a very polite gentleman with a lot of heart! Good man he is and Ryan was able to sit down with me and inform me on his 2cents about the production.

"Be careful on what you promise your audience..." Is one of the good advice he told me.

Essentially, Encore has been in production for about a year now, however the programming did not start until Mid February. There is a long road ahead of us and I just thought I'd like to share my process and experience with you guys.

Ethereal Muse will release something new to show. Whether it is a wall paper, video or even a beta release, we want to make sure you guys are fully satisfied on what its like to be developing an indie game with a high budget.

What to Expect in future updates

Beta Testing:
Mid April is when I am expecting to release an unpolished/unfinished (KEY WORK: Unpolished/Unfinished) playable demo.

Bigger resolution of this picture will be released shortely 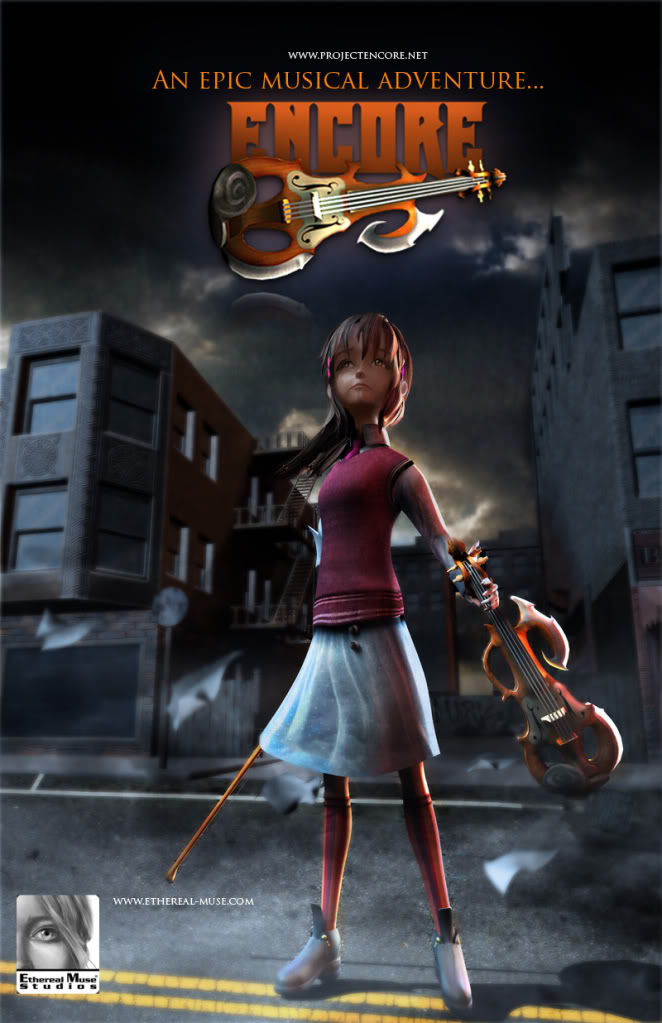 Awesome Work! Props to you guys.

The poster is too passive. Maybe if you put the girl playing the violin and move her a little to the right, facing the left side, it will work better.

Keep it up guys! Nice poster)

I love the style of it really feels like a pixar film perfect gameplay etc will be a awesome game.

Little girl in the world full of darkness... Nice, nice...
I'm waiting for demo version of this amazing game ;)

I've got a question - who is your graphic designer, who made this awsome poster? Who have idea to make this poster?

I appreciate your kind words! As for your question, the graphic designer is a young studio like EthMuse and the name of this studio is BlackBamboo.

All the assets were provided by EtherealMuse but BlackBamboo did a phenominal job beautifying it and making them all come into harmony. The founder of BlackBamboo found us on concept art and we were able to come to a fair collaboration on how he could help market the game for a fair compensation.

Thank you BlackBambooStudios and I am excited for everyone to see the up and coming work you guys are going to be creating!

Excellent work so far, this is on everyones watch list this year for THE indie games to play of 2009. Welcome to the list.

I'm sorry but the face of that girl in the poster looks like a frog turtle old woman face... :D

I dig the violin.

The violin and the background look really cool in the picture, but the girl's face looks rather strange; because of the angle, maybe?

I do agree with all of you in regards of Erika's face. In all different angles Erika looks very appealing and beautiful -- except for this one. BlackBamboo is going to do their best in a way which would seem more appealing and maybe down the line i'll have my modelers rework the face so that specific angle looks better.