Testing a drive-by feature in the Killing Floor Vehicle Mod.

One feature request that has repeatedly surfaced during the development of the Killing Floor Vehicle Mod is for the inclusion of passenger weapons. Well, after much tinkering and at times frustration (I can vouch for that) Braindead has compiled a play test concept build to demonstrate the viability of a passenger weapon feature.

The following video presents an early development stage play test. There are still some tweaks coming so view this as just a concept taster. So far, this passenger weapon is in the police car in the form of a 'drive-by' feature where the passenger is leaning out of the window with gun a'blazin. This feature is also supported by the helicopter with a passenger controlled cannon seated outside on the left side that supports the pilot's controlled weapon on the right side. 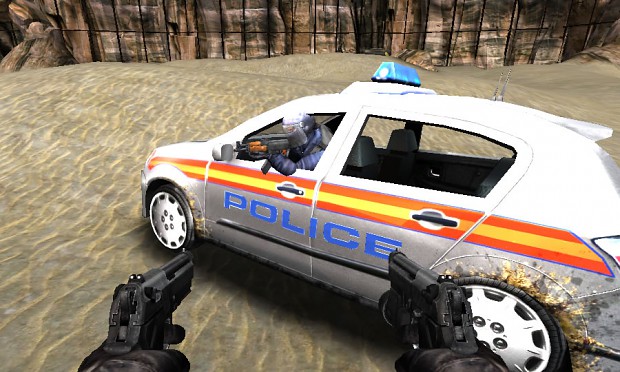 For this news item we're presenting in game footage of the vehicle drive-by feature on its' very first Coop run (for the benefit of moddb users who are kindly watching the mod). We'll present some further video footage that includes the helicopter very soon but for now here's a sneak peak image preview. This image presents 1st and 3rd person view for the helicopter front seat passenger and provides a good idea of the weapon's effective power...that is as long as you have a competent Coop pilot on hand. 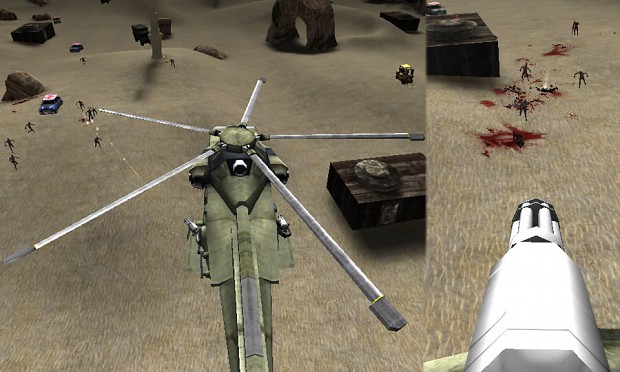 In both the ground based vehicles and helicopter, the passenger will require a driver/pilot to control the vehicle.The passenger's role will be purely as support gunner. This format really brings out the Coop teamwork element that Killing Floor excels in.

Wow, you guys are amazing! Great stuff there! Can't wait to test it =)

All credit to Braindead. He's a one man band when it comes to building a complete package feature.

@Shoelip after watching 28 weeks later, I did really want to add it as a feature but with the size of the heli and the size of the maps, it just isn't feasible, as you would be crashing into everything else as well.
Sorry to dissapoint on this but with twin mini guns, there is more than enough carnage fun to be had :)

Check out the video of Blood Mountain. It's built specifically for the helicopter. You won't feel claustrophobic in that one. :)

Hmm, can't the "Drive-byer" aim his gun ? its kind of pointless to put your car into a position where your shooting man can shoot only at one point.

This video displays an initial development build just to check feasibility and restricted movement. The current build provides a horizontal and vertical arc of movement within the confines of the passenger window.

so do you plan eventually to attempt to give the passengers free aim? because that would be awesome.

Within the confines of the passenger window you'll have free aim.

it reminds me of GTA4 with zombies.

It looks fantastic, and I can't wait to play it. However, I'm a bit worried about the zombie-on-car interaction. I'm expecting more splatters and less pushing. It is for balance, I understand, but having to push a zombie across the map to kill seems off.

Maybe I'm thinking about Zombie Driver too much, but whatever you decide, I'm sure it'll be great in the end.

Hi Spinky,
This mod has a 'drag frag' system in that if you're travelling at full speed you'll get an abundance of insta-kills. If you're making some slow turns or taking your time about things then the zombies will be dragged along until you pick up speed, crush them, they escape, or they destroy your vehicle. We tried a couple of setups and this balance really works well.

It's the 'drag frag' system coming into play. ^ Read the message above yours ^