Another update in which we cover progress on the game, with a few details: upcoming demo, testers wanted, Steam builds, new glitch...

As I promised, here is another development update, this time with less pictures, but hopefully you will still enjoy it!

So, what have I been up to these past few weeks?

Glitchbuster has reached the point where I am just polishing the game, and having people test it is extremely valuable.

If you are a developer, I would love you to try the game and let me know what you like or don't like. I would also be happy to try your game in return.

If you are a player, you could simply enjoy a fun game without paying a single dollar for it, why not try it? All you need is a web browser :-)

Glitchbuster was originally an entry for the js13kGames 2016 game contest. The goal of the contest is to build a fun game using Javascript in less than 13kb. Glitchbuster actually made first in the mobile category, and second overall. 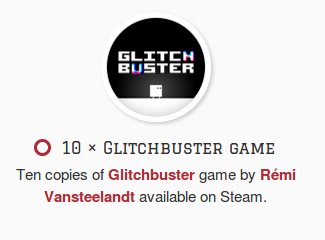 If you know Javascript and like fun challenges, I would highly recommend participating in the contest. Just head over to the website on August 13th when the theme is announced and building something cool!

Plus, you might even get to win one of the 10 Steam keys that I will be giving away, so why not give it a try?

Every once in a while, I think about new gameplay elements to add. The great thing about Glitchbuster is that the whole game is about changing gameplay elements. So, all I have to do is to create a new glitch, and it will be randomly added to the levels.

Here is a simple glitch that I added:

One of the difficult things when building a roguelike is to make sure the difficulty is balanced, even though you can't entirely predict every possible case.

In Glitchbuster, it is very important for me to add glitches that make sense in terms of difficulty to the right levels. Indeed, some glitches are extremely difficult to deal with, while some others have absolutely no influence on the gameplay. For instance, the first level should not feature the hardest glitches, or it will be too frustrating.

Because of that, I rewrote the level generation algorithm, making levels more "predictable". Glitches now have 4 possible difficulty settings:

This new system makes it a lot easier to make sure that levels have a difficulty that makes sense, while still allowing for infinite possibilities.

I've been wondering how to end the game for a while. I don't want players to be disappointed that nothing is special at the end, or that there is no final cut scene.

Though I will not spoil it here, Glitchbuster now has a final level, and a short scene at the end to reward the player. It is not extremely different from the rest of the game, but it does feature an extra challenge. And yes, you do get a congratulations message for beating the game.

I am happy to announce that Glitchbuster will have a demo. The demo will feature two levels as well as a nice set of powers to unlock. If you're curious, this should give you a good idea of whether you should get the game or not. I want to make sure that people only get Glitchbuster if they think it is something they would enjoy.

I am not sure when I will release the demo yet, but I'll make sure I announce it here!

Even though I am building the game using HTML5, I still need to compile the Javascript on the target platforms, which means that I need to run the compiler script on Windows, Mac, and Linux. I want to be able to push all versions of the game from one computer. In order to achieve that, I made the script upload the compiled Javascript to my own FTP..

For instance, I can just start my Windows laptop, pull the last changes, run the compiler script, and let it upload the compiled Javascript. Then, I can package everything with my Macbook.

That's it for this update. It was a bit more technical than usual, so I hope I'll have more screenshots and videos to share for the next one!