The Beta Demo for Pursuit of Power 2 : The Chaos Dimension was released on September 29th, 2017. You can play it on Steam right now!

The demo for Pursuit of Power® 2 places you in a skirmish game as a Shadow Knight versus another SK computer player at normal difficulty. You will probably want to read the "help tips" image and there is an extended set of help information too. 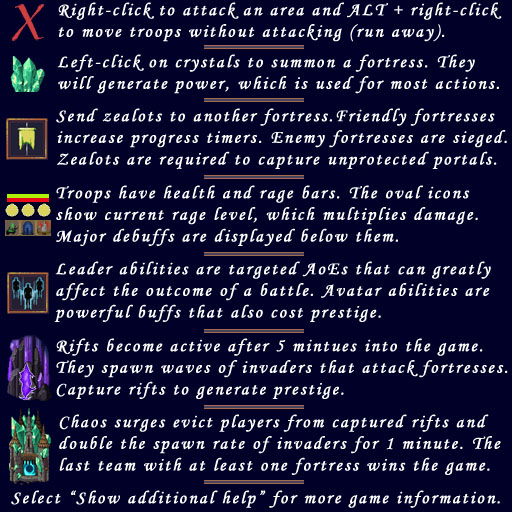 Pursuit of Power® 2 : The Chaos Dimension is a real-time strategy game with a different focus than traditional RTS games. Players connect fortresses together in order to build, upgrade, generate bonus resources, defend allies, and lay siege to enemies. Each player has a leader unit that summons structures and casts powerful abilities. Rifts dynamically spawn waves of invaders that drive the action. There is a priority system for enemy targets and a rage mechanic that affects combat in multiple ways.

Fight through a single-player campaign game with unique content and objectives for your leader. Play local and network skirmish games with up to 10 players. Join a team with allies that can come to your aid. Create new skirmish games using a map editor with a rich set of features.