Def-Op : Codename I.R.I.S has been updated to version 1.0.6. It contains numerous changes and bug fixes.

Hi everyone. After working on this update for 2 months, I'm happy to announce that Def-Op : Codename I.R.I.S (previously known as I.R.I.S - DefOp) has been updated to version 1.0.6 on the AppStore. Compared to previous versions which mostly contain minor bug fixes, 1.0.6 includes quite a number of changes and improvements.

When the left beam gate is activated, there's a random chance that the right gate will not even after repeatedly tapping on the on-screen R button. This results in some frustrating situations where the enemies will slip right past. I made some changes to the touch codes and the issue should be fixed.

Icons are now standardized throughout the menu screens, with proper labels on them. This makes navigation much easier. 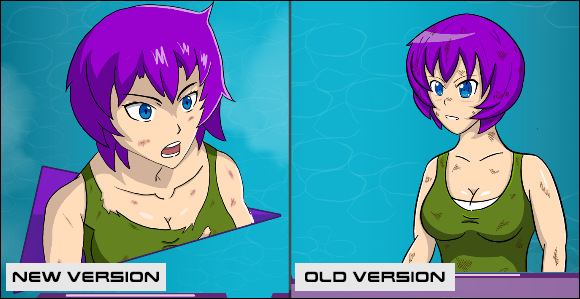 When I first drew Erika's dialogue portraits last year, it was the best I could do at that moment. Fast forward 6 months later, I tried redrawing them again and this is the end result. I personally think the new version looks better than the old one.

The lengthy unskippable tutorial cutscene has been replaced by a 3 page summary, with manga style images to further explain the story of Def-Op. Thinking back, making the cutscene unskippable was my biggest mistake. Anything that slows down the pace to get into the main gameplay will most likely cause users to delete the game.

Coding Def-Op was a bit of a roller coaster ride for me. It was the first time I tinkered with a lot of new things like multi-touch controls and way points for enemy movements. (My previous games only involve single touch and simple movements for objects)

As such my original coding is all over the place. Almost everything was lumped together, making it difficult for me to tweak things without breaking the game itself. My philosophy at the time was "If it works, heck care!"

I spent a good month plus modifying and optimizing my codes, doing bug fixes as I go along. Being half a year wiser, it's no surprise to come across situations like "This code is terrible ... why in the world did I do that in the first place?"

That's about it for version 1.0.6. I'm currently working on more updates, including other modes that are different from the main game. Stay tuned!