Important community update!! DASH - Danger Action Speed Heroes is a Powerful, Precision Platformer Program (PPPP). It allows you to let your level design and speedrunning skills loose! Inspired by the magic of other "level makers" DASH takes the worlds of level creation, level sharing, and speedrunning to new dimensions! Created by solo-dev Baby Duka from Copenhagen, Denmark Every Saturday Jake is live from the studio with updates and gameplay. Follow the progress from prototype to launch!

COMMUNITY UPDATE: "The DASHcord is here!"

Every week I gather all the news about DASH here on IndieDB!

Jake is filling out the needed data for the game to be solid on the Steam page while getting the alpha build ready to upload to the Steam server. In the beginning of August a very nice and action-packed build should be ready for all of you patient DASHers out there!! You can still go to the main Baby Duka site and sign up for the alpha testing (fill out name, why you like DASH, your pc specs and hardware) and we will take you into consideration.

Jake has set up Baby Duka and DASH's Discord! Now you can join and get ready for the test launch!

It's official. The Baby Duka DASH Team now consists of

After a ton of work the new official, colorful and cool hub for all DASHers is here:

It has a (sketch)teaser (not the official teaser, that's why I'm haven't shared it here first!) for newcomers, featured content (news, new subjects to implementation, discord link, creative content articles, gifs and more!). It will be the main hub in the future, hoping to guide players with different intentions to the desired destination! Because is such a large world to dive into, this website is meant to distill all the newest goodies to the community!

Jake has implemented some new cool bot commands on the Twitch channel to have DASHers and viewers interact with the current runner in the stream. Stuff like !gg and !pr displaying juicy fruits and cool letters speeling out GOOD GAME and PERFECT RUN! Check out the channel to see the commands and try them out. The next official devstream and update is on Saturday the 14th of July 2018 at 8pm GMT. 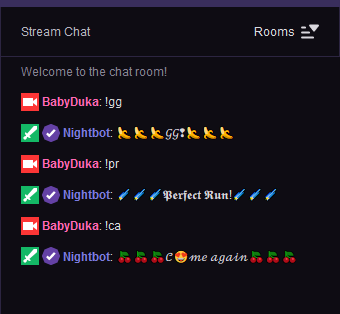