Today we uncover some of the latest addictions to the gameplay: the damage system!

May has passed away with no news, the E3 caught a lot of attention and I was waiting for some new stuff to be shown here. This last period, especially the last weeks, have seen some major changes in the game and in certain aspects of the gameplay, which are going to be improved a lot.

Below you can see that the HUD display is under serious reworking and a new cockpit for medium or heavy fighters is in the works, although still WIP. 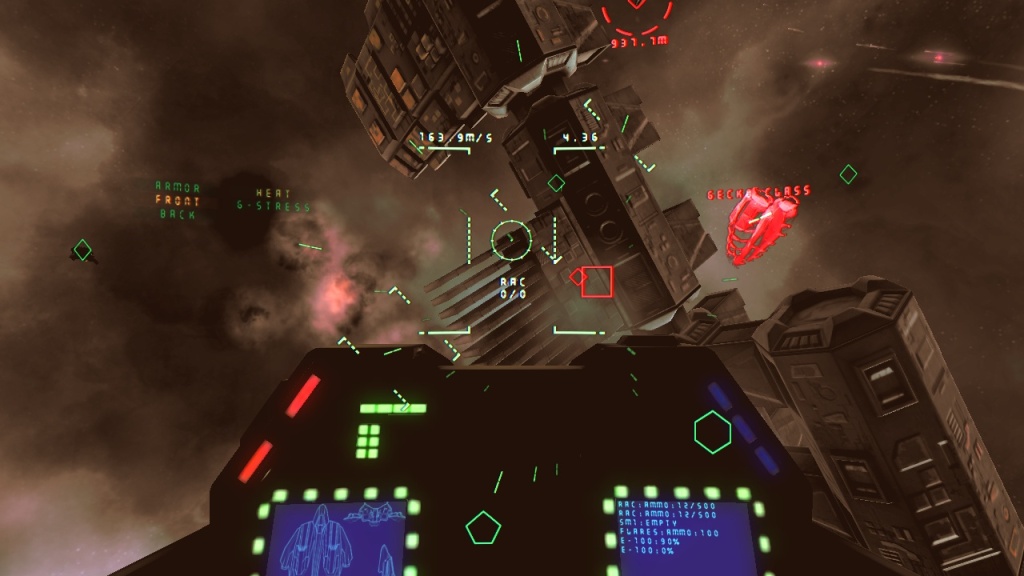 New virtual/camera views for both the capital ships and fighters are in the works too as you can see below and at the bottom of the news. 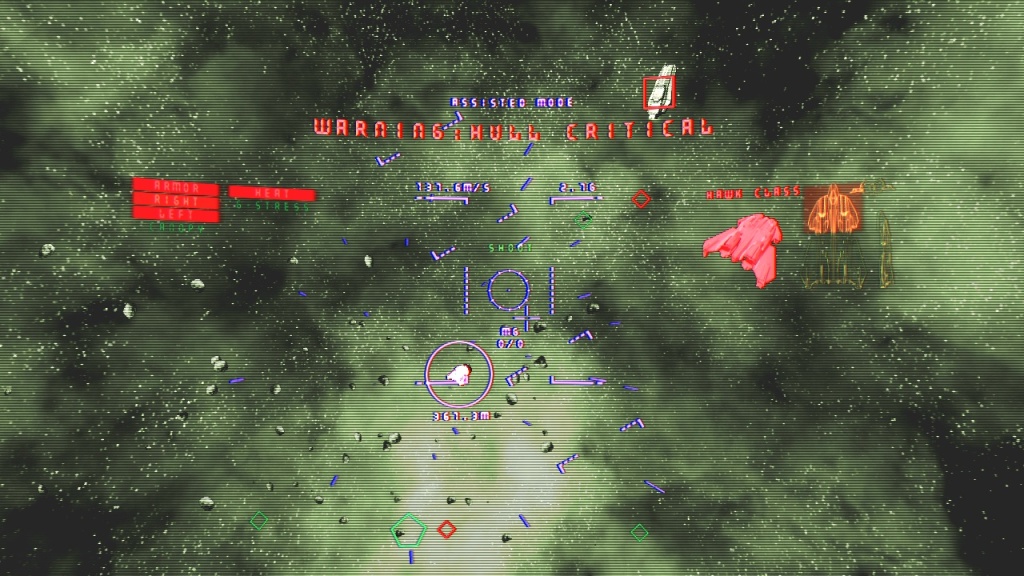 In these images you may also have noticed that now ships' hulls are divided in sections; see the green/red bars/squares above the 2D layout of targets; from now on I'll refer to these sections as “criticals”. A critical is a generic part of the hull that can store a certain amount of armor points and host any kind of subsystems/item/slot when needed.
In the above screenshot, the player has both its right and left rear of the hull highlighted in red along with depleted armor and very high levels of heat (all of this means nothing good of course!). These informations are reported on the bars that you can see on the HUD in the left of the view. In the right side you can see the status of the current target (here is a FCA Hawk), which has the frontal critical highlighted in orange, that means it's quite in bad shape but not as much as the ship piloted by the player.

Notice that this is all work in progress, so the number and type of sections and their visualization in the HUD is likely to change. 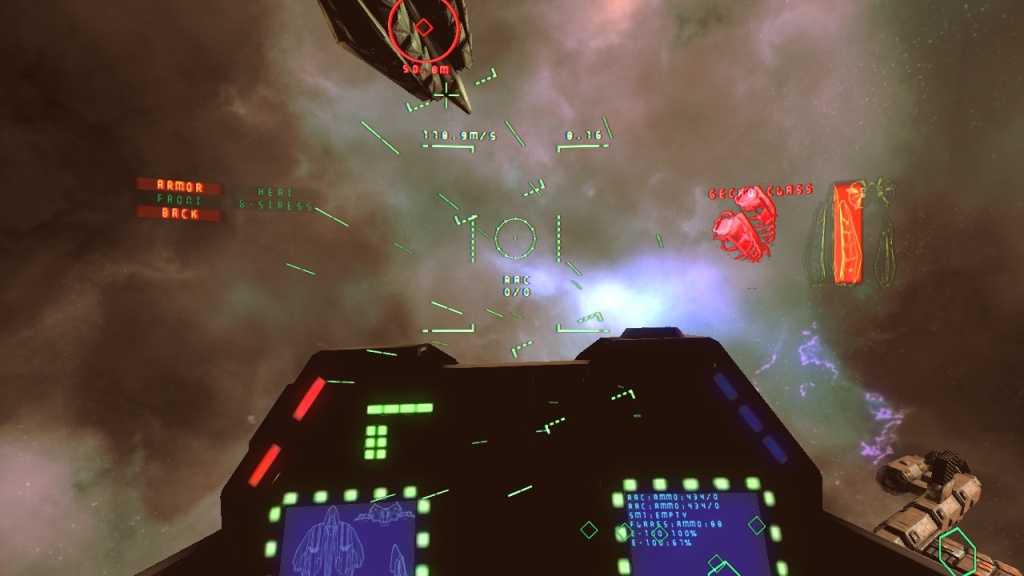 The above image is another example and shows a Coalition's Gecko light fighter (the current target) that has sustained serious damage to the right critical, which is highlighted in red in the center/right of the HUD.

Let's take a fighter for example: we can subdivide it in a frontal critical and then the rear can be split in two, right and left rear.

The front part holds several items/subsystems such as the canopy/cockpit, the slots for the weapons and avionics; the rear parts hold each one of the respective engines, along with thrusters and countermeasure slots.

This will affect the ship in various ways, like top speed reduction, less agility and of course, you offer a completely crippled part to the enemy; any further damage taken in this section, is going to cripple also the other parts of the hull even if these still have the relative armor in good condition, and lead to the destruction of the fighter.

Notice that crippling the criticals of a fighter containing the canopy/cockpit may lead to the sudden death of the pilot.

Things works similarly also for capital ships (of course there will be many more sections/criticals, depending from the dimensions and the shape of the vessels); however commanders can rely on some squads of engineers that can be sent in the crippled parts of the hull, in order to field repair them up to a certain condition of efficiency (and repairing also the subsystems present in that area).

However players will have to wisely employ these repair teams, because if sent in crippled parts of the hull still under enemy fire, these squads might be killed from the upcoming shots.

Again, if a critical of a capital ship is crippled, any further damage taken there is going to affect the whole hull/chassis of the vessel, reducing its efficiency. If this area is left un-repaired, the whole ship can be destroyed like what happens with the fighters, even if the other sections were still armored and intact.

Another difference that distinguishes the capships' damage management, is that commanders are given the ability to “seal” the crippled sections of hull, but by doing this, those parts of the vessel are gone forever: all the subsystems in those areas will never be repairable again, the engineers teams won't be able to access them and no field repairs from allied ships can be applied to the sealed parts. The advantage of sealing a crippled part of the hull is that any incoming enemy fire directed there, isn't going to affect the rest of the ship.

I think I won't have to say how depth in the gameplay has been added with the above changes :) 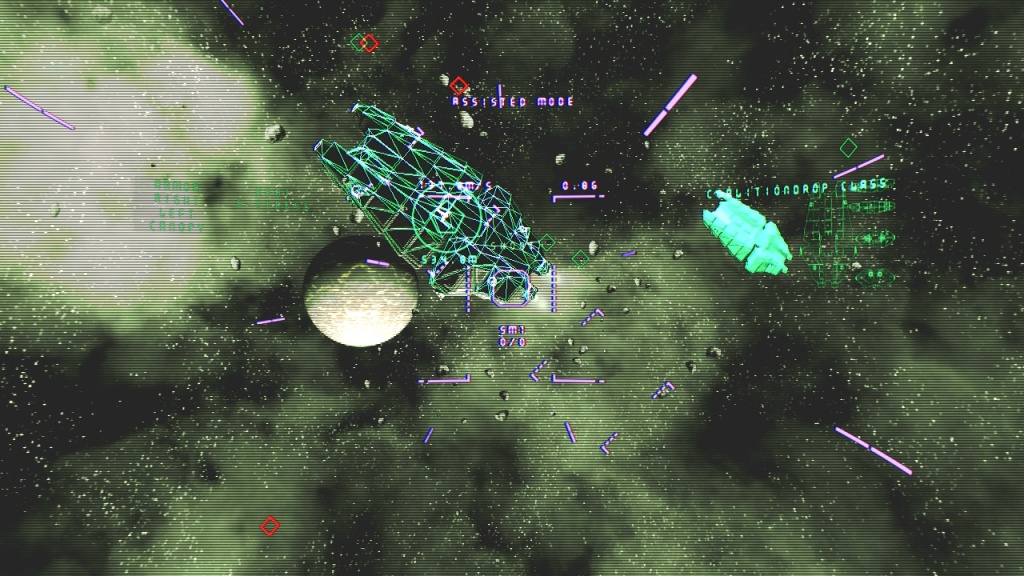 Finally I'm glad to say it's likely that in October 8-9th, we're going to give an exclusive presentation of our game at the IVDC (Italian Videogame Developers Conference, more information in this thread ).

Vincenzo Lettera (editor of this interview ) is going to reserve a time slot for us during the independents developers conference at the IVDC. Of course the whole team wishes to thank him and the whole AIOMI association for proposing us such an occasion.

We plan to show a new trailer of the game and if possible some gameplay taken from the beta as well, that after the exclusive presentation will be of course released to the public.

Sounds and looks great! The engineers and the sealing off just totally makes me drool.

This sounds really, really cool. It's starting to really come together in a brilliant way.

You are my hero

Please be aware that Red/Green color blindness is the most common form of color blindness (99% of all people color blind cannot, or have difficulty distinguishing red from green). As such, this HUD is not terrifically accessible.