Today we're talking about Character Status Effects in #CryoFall and what you can do with that system! Take a look at the Dev. blog entry #22!

It's been a while since our last update... Sorry about that :)

But we've been working hard on a lot of new additions to the game in preparation for launch!

Yes! We are planning to make CryoFall public relatively soon. We feel there's enough content to keep people entertained for a while and we are constantly adding even more content, so it seems a good time to finally make the game available for public! Currently, I won't go into too much details regarding our release plans, but we will have a detailed post with more information within a few weeks. So, make sure to follow our blog!

Anyway, now onto the main topic for today. And that is character status effects! 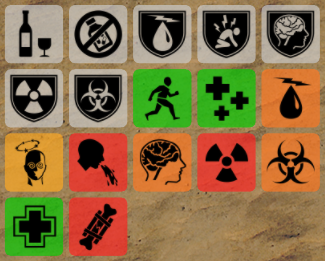 It looks something like this in the game. Now, obviously you won't ever see madness like the above, at most I expect people to have 2-5 active status effects at any one time, but for the testing purposes I added most of the status effects that are available in the game just to show you how it looks :)

So, let's get into a bit more details about the stuff currently in the game.

We can start with the negative status effects (or "debuffs"):

There are obviously some positive effects, including:

And finally there are some "neutral" effects that don't do anything by themselves, but affect other things:

And that's more or less it. Next time we will cover the actual items that help with those status effects (medicine).

Don't forget to join our forums or leave your comments here!