Posted by UltimaRatioRegum on Apr 5th, 2015

As mentioned on URR’s Facebook page, 0.7 will be released on Saturday, April 18th. This is (for once!) a 100% confirmed/guaranteed/absolutely certain release date, unless I die before then, in which case I will empower someone to release it for me. To remind everyone: this is the last worldbuilding release. As you’ll find when you wander around it, the world is now madly detailed, and contains every imaginable building ranging from crypts to cathedrals, townhouses to mansions, and banks to parliaments and slums to shops, with procedural graphics for everything within those buildings, ranging from walls, floors, tables and chairs to altars, reliquaries, tombs and vases.

Another quick reminder: if you’re in the UK or Europe, you should come to the Roguelike Development Conference I’m hosting at the awesome National Videogame Arcade. If you’re in the UK, you should swing by Norwich on Saturday 11th to listen to my talk at Norwich Gaming Festival. Now, onto this week’s update:

Our last building algorithm is complete: for courts! These will only spawn in nations which follow the “Penitentiary” or “Ordeal” justice policies, and appear in city centers. Again, I wanted to make them aesthetically distinct from all other buildings, which remains tricky when one’s not using a tileset, but I think I’ve managed to find another clear visual style here. They use lots of chairs in the various hearing rooms/courts/chambers, but they are set out in coloured “stripes” according to the wood of the chairs and the shape of the room. There are also rooms with just tables in, which will later contain court records of criminals, important trials, etc. The overall shape was inspired by the “Star Chamber” in English history – although it is generally agreed that the name of the court was based on its decor, I realized that I hadn’t created any building shape which was based on either a star (or a cross), so I utilized both of these for the external court shapes. Here are some examples! 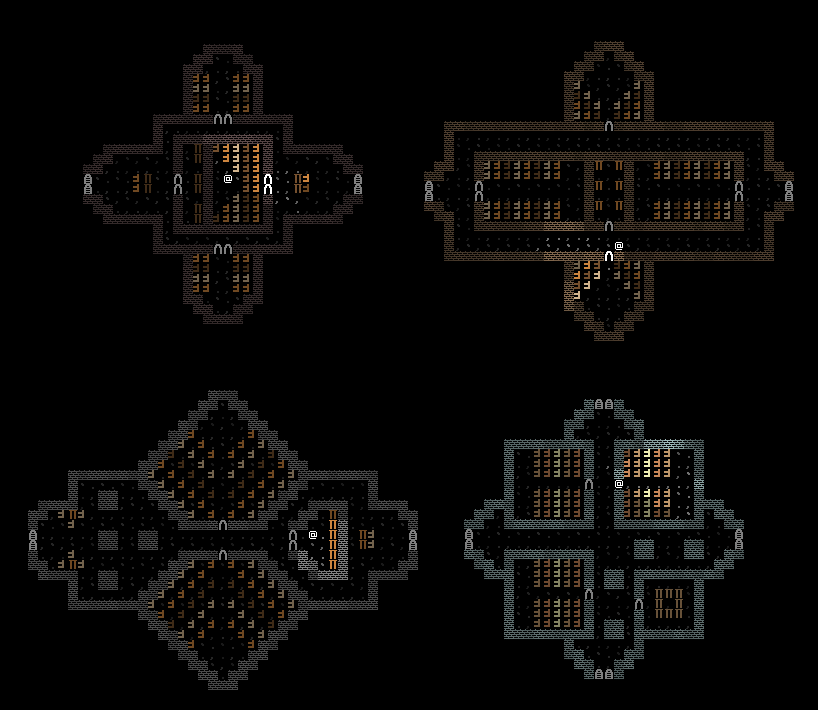 I’ve finally done the last major graphical block in this release: the tombs. These are generated using a vaguely similar modular system to the nomadic khachkar graves discussed two weeks ago, and they vary in a number of ways. I debated at length whether or not they should ever have names on – given the extent to which that would give away the game! – and I decided that the answer was no. No matter how noteworthy the person who is buried there, the tombs will never have names, and will (as with much else) be understood/decoded according to their symbols and graphics, rather than text. As you can see, there’s also minor colour variation; tombs in flooded crypts will have a slight blue tint, those in desert crypts might have a fractional red tint, etc etc. There’s a huge range of pattern layouts – the ones below show three of the layouts (two lines, six squares, three columns) and a small portion of the possible designs that might be etched onto a sarcophagus; there’s also a whole bunch of different shapes/designs for the top of the sarcophagus, and a lot of pattern variation within that too, meaning that each sarcophagus consists of between 3 and 10 components each of which generally has between a dozen and several dozen variations. Each sarcophagus will, of course, be unique. So if you hear that Person X was buried “where the stars rise between the vines and the torch”, then… 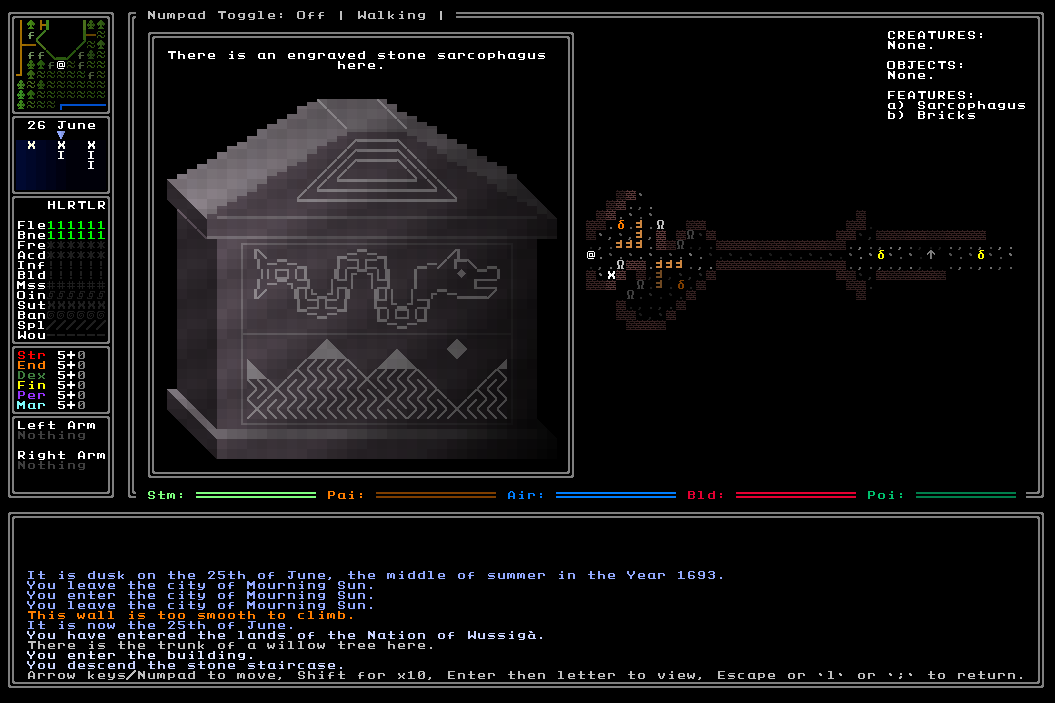 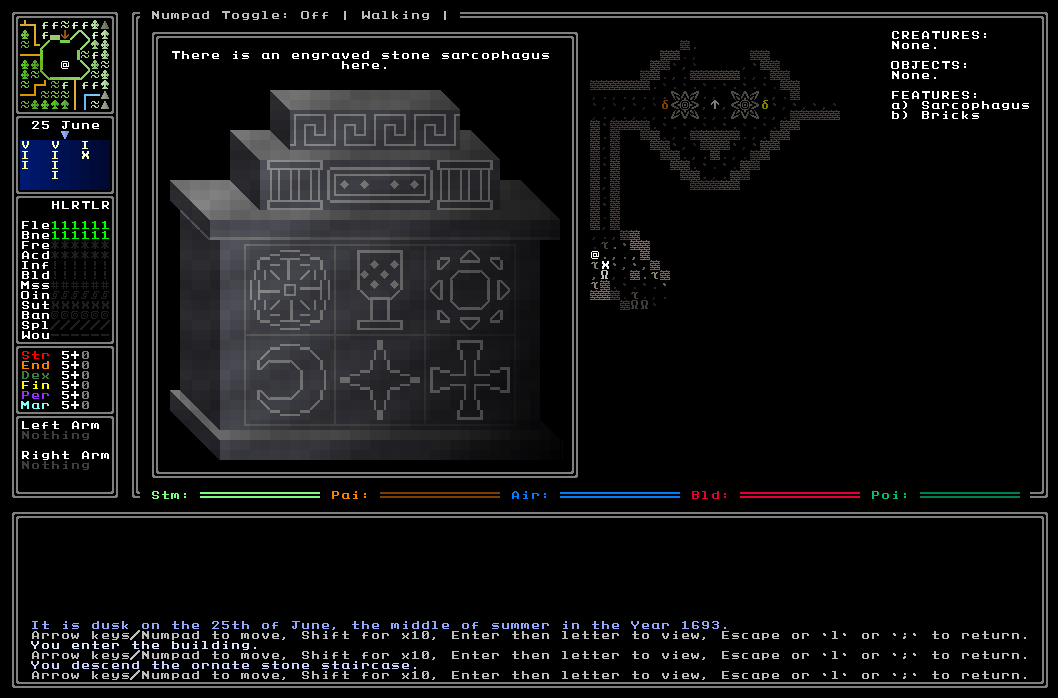 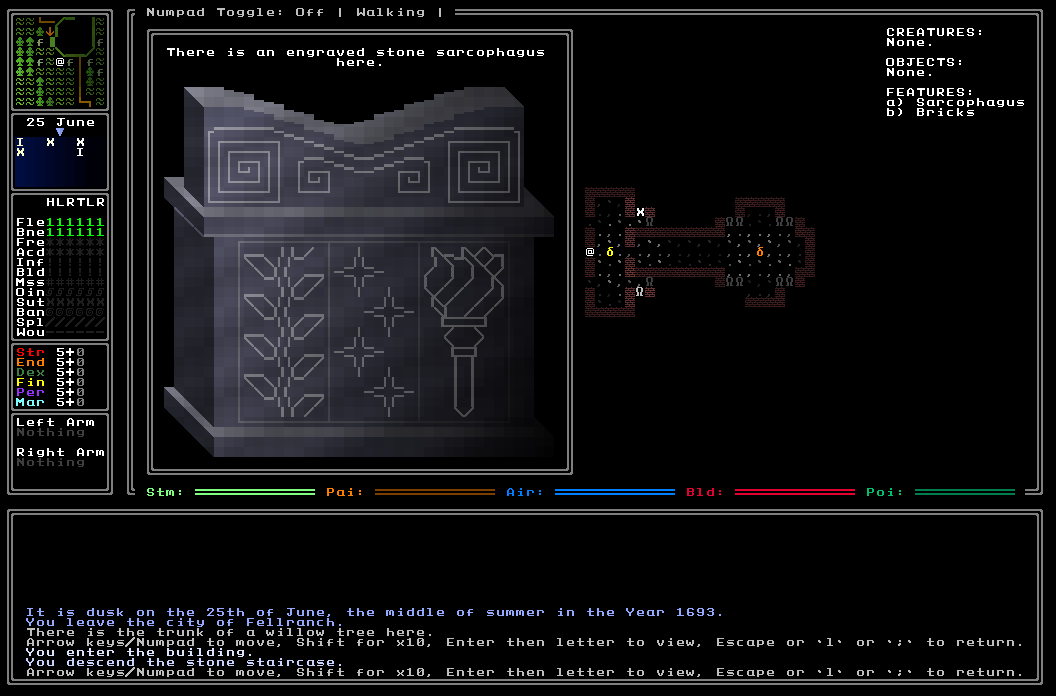 I also threw together stair graphics, and ensured that the downside stair graphics can integrate correctly with graphics for wooden, stone, and ornate flooring (yes, I am aware the perspectives on these two staircases is different; that’s fine, you’ll never see them “together” in-game, and they proved easier to draw in the two different perspectives anyway). 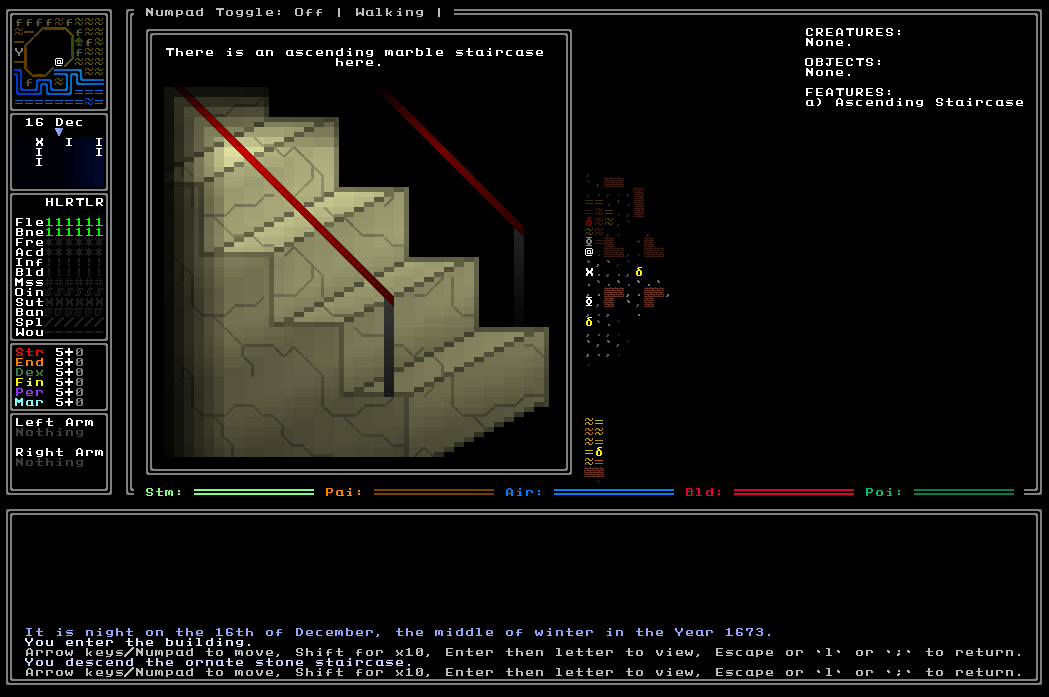 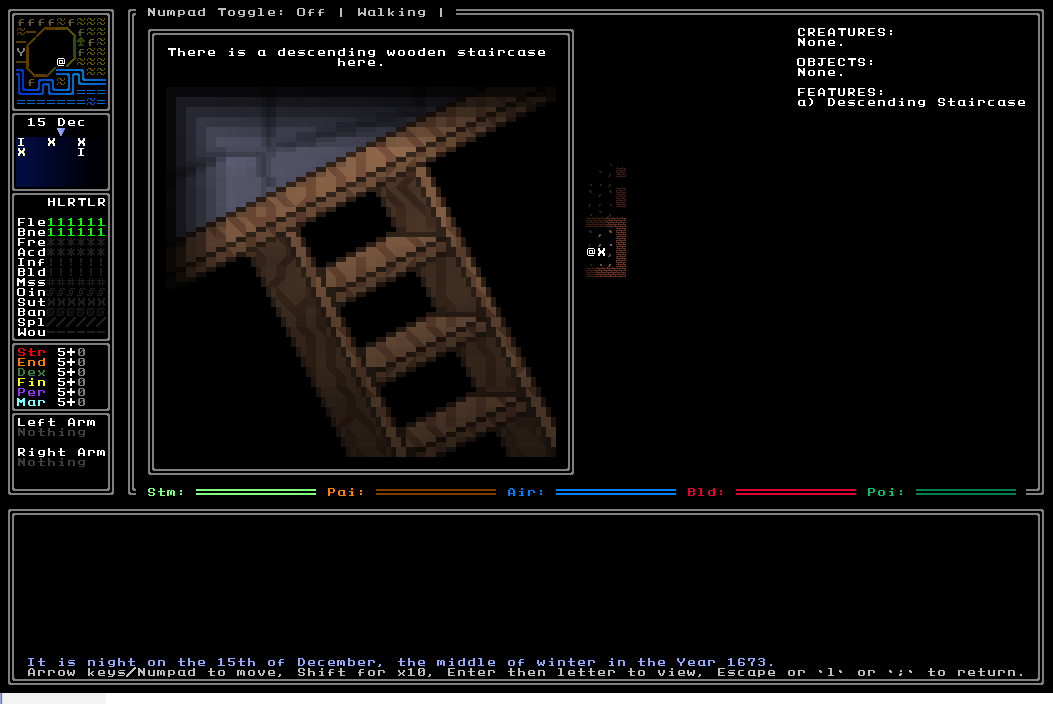 I’ve also worked on crypts, finishing them, and emphasizing the difference between under-cathedral crypts (in Theocratic nations) and under-graveyard crypts (in Monarchic nations). They each have a distinct set of rooms, though some of the rooms for the under-graveyard crypts won’t be fully “activated” until we have NPCs moving in 0.8. Also just done a host of other optimizations, slight changes, making sure the correct “quality” of tables/chairs/beds spawn in each building, blah blah blah.

I’m now onto the final bug-hunting phase of 0.7’s development. There are as ever a wide range of minor ones – things generating in slightly odd places, text that isn’t completely logical, incorrect grammar/typos, etc, but only a couple of major ones. As far as I can tell there are not any crash bugs, though, which is obviously a good point to proceed from. One of the major ones is an extremely rare but very annoying bug with external sources of light allowing the player to see “through” walls, but only at a distance; in all my playtesting it has only occurred twice, and whilst I would like to fix it this release, I’m not going to let the release drag on an extra week, say, if the only remaining issue is this bug.

Lastly, here are some nice screenshots: a nomadic citadel in the fortress of Khan’s Rest; an altar to Ahorim, The Grey Worm of the Nightmare in a crypt below a cathedral in the desert; wandering around in the Red Senate which rules over the Nation of Ghanari; and exploring the manor of House Pinnom, in the upper-class district of the city of Mourning Sun. 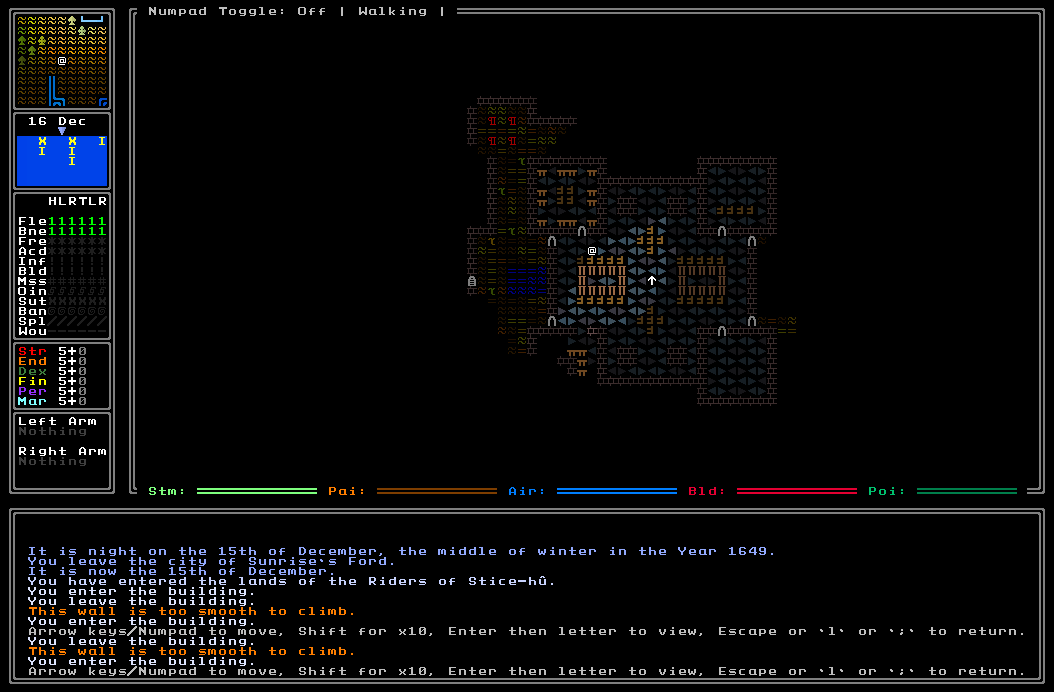 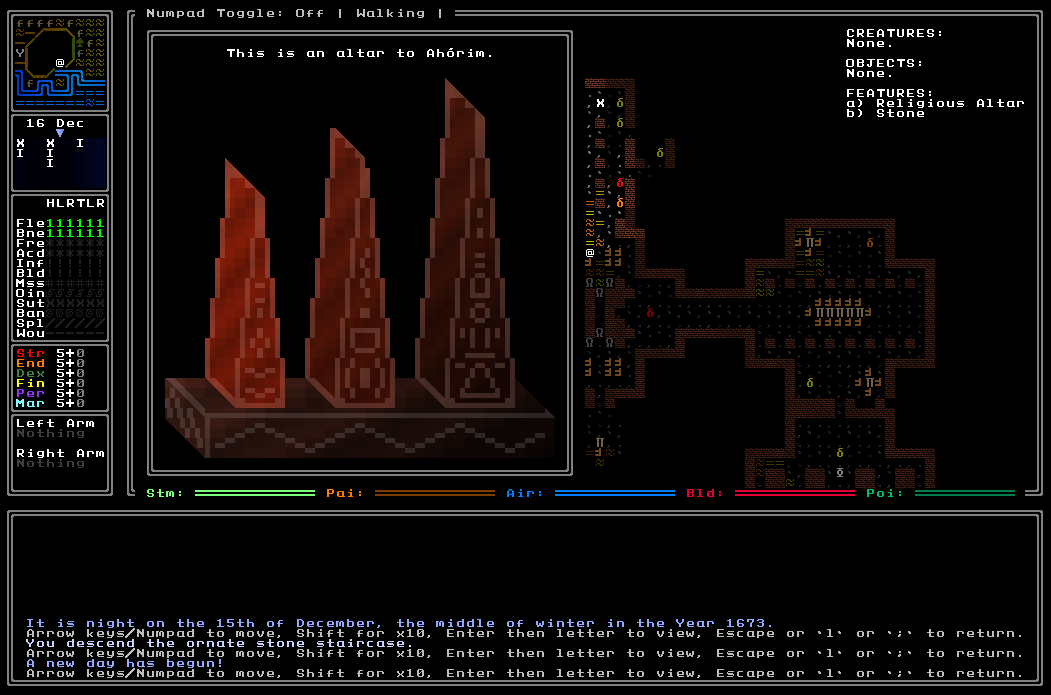 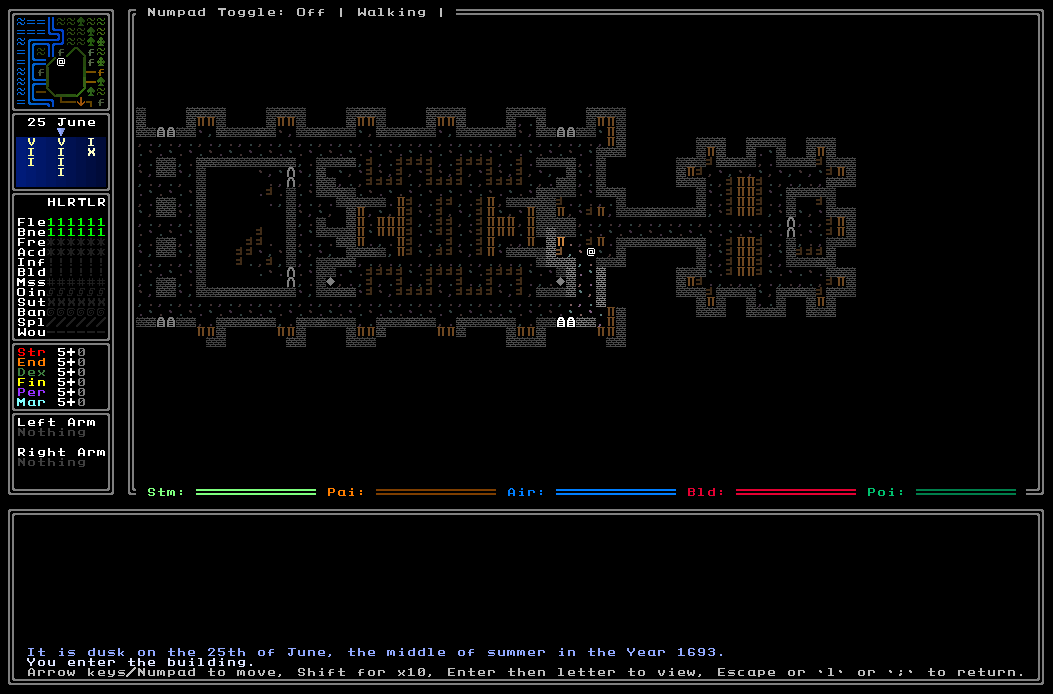 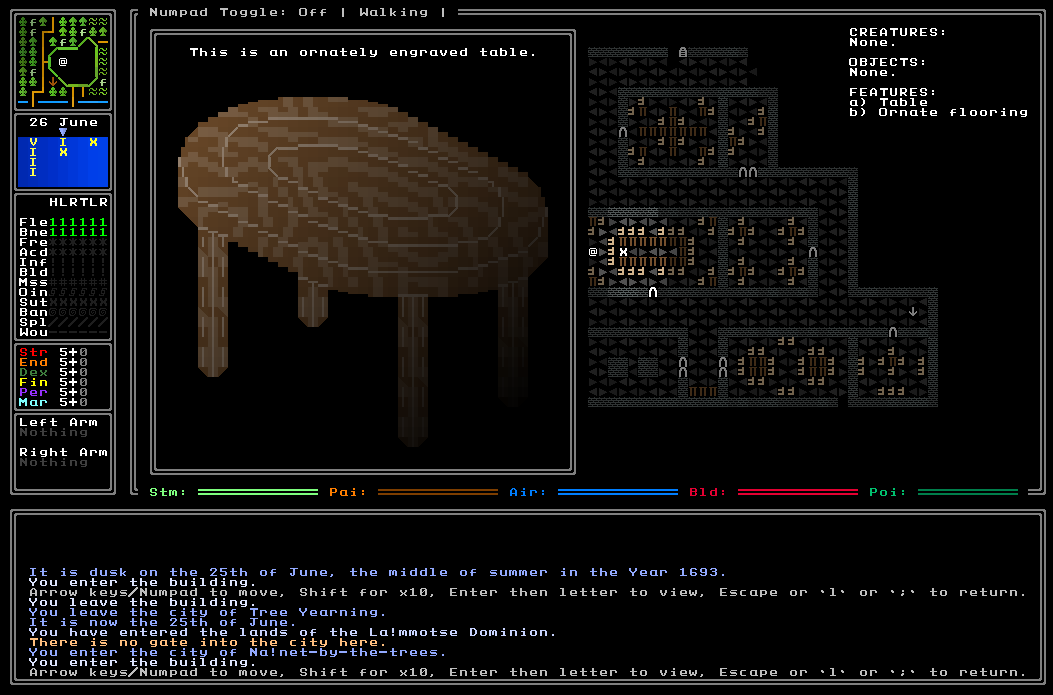 Who knows?! But hopefully a celebration of a successfully-passed thesis defense…

>I only hope this is not a communist talk.

Yeah, I have... no idea what that comment meant. At all.

What a masterpiece man, I just wished you could get more people on board to help you out, I feel like you might want to rush in a few things or lose motivation before this is all done. Please don't, this is an industry changing game, if you really make it to be the depth you intend. Please, please, don't lose yourself in the lone wolf attitude, you have only things to gain by having other people help you out out of their own free will.
Big support from Portugal, already told a few friends about this.

Wow, thanks! Let me put your mind at rest: there is a *0%* chance of me stopping before the game is complete. However, there is also a 0% chance of me bringing anyone else on board: it is a one-person project and always will be, and there's a lot of reasons why I don't want to add anyone else to the game's development. Thanks for spreading the word, and awesome to know I have some fans in Portugal! Let me know what you think of 0.7 once I release this Saturday :)