I am a concerned parent that would like to discuss the idea of shooters in gaming today.

I’ve decided to write a post on my thoughts with regards to shooters.
Party of Sin is a shooter and I would like to discuss some of the
things I’ve heard about the genre. I am just a concerned parent taking
care of his child.

At the end of the day, shooters tend to be fun, well I think so
anyway. That’s why I decided to join Crankshaft Games and develop Party
of Sin. Shooters were always the type of game that I flocked to most
easily. Non-shooters had to grow on me. For example, puzzle games
usually take time for me to get into and it is rare that I finish them
in my first sitting. This is, of course, my personal opinion when it
comes to shooters and the game industry.

What makes shooters fun is beyond me. I got hooked on COD: World at
War about a year ago and I was disappointed with myself. I kept thinking
“This is such mindless gaming… it adds absolutely no value to my
design knowledge and will not help make Party of Sin any better”. I
still played it though. Maybe it is an escape from reality, maybe
players live vicariously through the game, maybe it’s human nature to
kill, IDK.
I will say one thing though. I do enjoy WW2 history and thought I
might be able to relive some awesome moments playing World at War…
which was somewhat true. However, a game does lose its appeal if the
same mechanics are kept release after release and the only things that
change are setting and textures. I mean, the story in COD isn’t even
engaging anymore. You play as five different characters and do not
relate to any of them because they just aren’t developed enough. Here is
a simple formula…

I wanted to bring this point up because it was the driving force
behind this concerned parent post. All the hearsay I’ve heard about
shooters being “overdone”, “developed to death” and so on have mostly
come only from developers. It is so wrong to make games people you know
will like? I don’t view myself as being a sell out because I like
shooters, I like making them, and it just happens a lot of people like
playing them to, which is the icing on the cake. 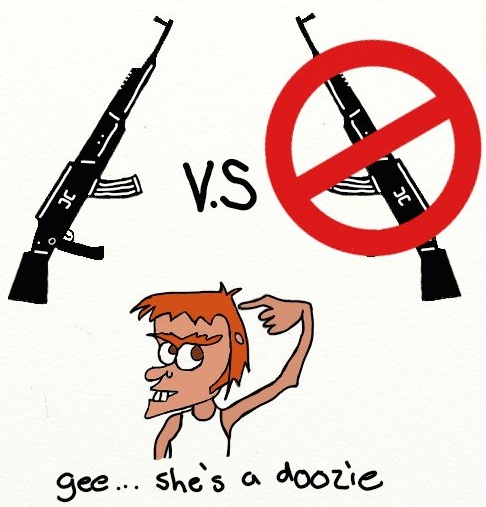 WHY PICK ON SHOOTERS?

At this stage in the game, every genre is overdone. Whether it may
be shooters, puzzlers, adventure, similators, etc… its been done and
done again. The need to differentiate your game within one of these
genres is what makes designing games so challenging and what puts your
game over the top. I think at this stage, the theme of your game is
what has a lot of weight with your community. Is it something people
think is cool right off the bat or is something that requires
paragraphs of explanation?

I guess the main thing to look at is not making guns the core
mechanic of the game. Add other meaningful content to the game like
super powers, special abilities, items, that are different from one
another and add depth to the game. Another element would be to make the
guns complimentary to the other mechanics of the game. Don’t rely of
guns to make your game fun, cause it won’t happen. There has to be other
elements, with greater meaning.Alex

GAMEPLAY, gameplay, gameplay. That's the number one most important aspect of a game. It has to be fun to play.

Coming in for a close second is advertisement; getting your name out there. I say it comes in second and not first because even insane advertisement will not stop negative word of mouth, and you won't maintain game sales if your game is a piece of ----.

I say advertisement is all the way up at second because... well... think of all the great games out there that nobody knows about because of poor advertisement. I'm using the word advertisement loosely here... I mean any method that informs players about a game. Minecraft is a great example of non-traditional advertisement.

The way I see it, a game is it it's best when it reacts to you. That's what players respond to the most. You pick up a torch and light something on fire, and the entire building burns out. Logical reaction... but sometimes gamers don't expect that level of detail. That's why Minecraft is so enticing. Everything in that game reacts to you like it should.

In a shooter, that means your enemy AI has to act believably. They need to duck when you shoot at them. Hide if you have a giant gun and they don't. Throw grenades from behind cover to try to smoke you out. All these small "reactive" behaviors make the world believable.

"Fun to play" is a pretty bad metric for gameplay, so that's how I try to measure it. How reactive the game is will directly correlate to how much enjoyment the player has... for graphics, this translates too. Big explosions and cool animations are a reaction to player input or using a certain gun. They add to the enjoyment as much as gameplay.