Information about how to kill the tank in Left 4 Dead 2, Quad Capping, ROcket Jumping and much more!

Well it's time for another Community Spotlight, wow number 7! Firstly i'd like to address the Community Spotlight release times. I have decided that i will do a community spotlight every Monday and Wednesday so long as i have at least three things to talk about. I may change the wednesday date but right now consider that to be almost set in stone. Before i break into game specific content i am going to talk about the podcast.

Episode 10 of the Survivors Diary Podcast is set to release on Monday 18th January 2010, so we have started a discussion about the next episode and about what content we are going to be talking about and asking the community for any information about Hard Rain or playing the infected in Scavenge mode.

This week is going to be a proper return to posting regular content to the website, i intend to be releasing Korean Thugs review of Avatar tomorrow. I have been sitting on it a while and i need to post this review. It's not about zombies but its a good film and needs a review posting of it. Also Magmamelt is promising some more Killing Floor articles and tactics in the not to distant future. As i look at a list of posts i can see one in draft mode. So now onto gaming stuff: 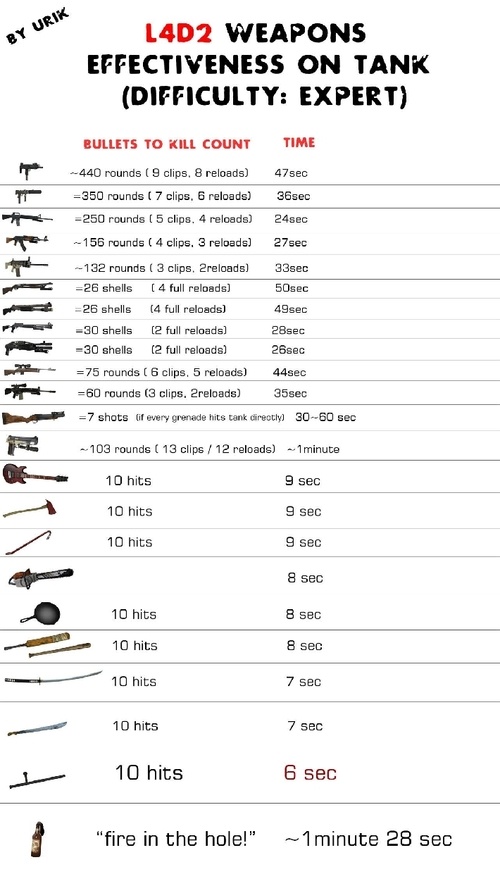 Best Weapons to Kill a Tank

I was saving this for today's community spotlight but flamingfox posted it in the forums before i could summon enough content to talk about it. Urik spent time to test every weapon in Left 4 Dead 2 on the tank, in expert mode and tested how long it would take to kill the big guy. His findings are surprising, although it does not have minigun use on the tank it does have pretty much every other weapon.

The list starts with the uzi doing the least damage and finishes with the Baton which does it in 10 hits and 6 seconds which is astounding. Getting that achivement won't be too hard then! Anyway i will not deprive you from it any longer, check it out to the right of this post ->

This is a facinating video of a team on Versus who execute a Quad Cap in Scavenge perfectly, it is a work of team work art and should be the thing that we see more often in Left 4 Dead 2. Although if we do then playing Verus/Scavenge would be a struggle but perhaps it would improve the communties skill level. I would love to be able to work on a quad-cap like that, we had a tactic on it by Goldleader for one of the episode of the podcast but it really needs updating for the new version of the game. Although when you think about it, with 4 incapping infected executing a Quad cap should be a very simple process. Never the less check it out here. Thanks to AA Killer

The common first person shooter dynamic was removed from Left 4 Dead because, well we don't have a rocket launcher. But it seems that this has not stoppped anyone, using another team mate with the grenade launcher you can grenade jump quite high distances using it. It kills you instantly if you land on the ground and even if you don't you will probably be caught hanging from a ledge. Still it's fun to see and when you get past the dark red text on a dark background you can fully see the fun of this mechanic. Thanks to AA Killer.

And now to break from Left 4 Dead 2 news and move onto some specific for Valve. Over at Machinima they have a 6 part video series which talks about how Valve got started and what they did to the video game industry, its interesting watching and i highly recommend. Check out part 1 here, all subsequent parts can be found as Video responses.

This is a mod that i have been following for some time now and it has finally got some single player gameplay added to it i think. Either way i have it downloaded and i intend to give it a spin later today and write up a review of it. You can read the release news post here. Has anyone else played this mod? If so then let me know, we may even have to get an online game of it on the go to properly test out the experience.