In which Dirkson reflects on a christmas contest gone well.

Nothing says "Christmas Cheer" like a little statistical analysis, so let's cuddle up with a cup of post-Christmas egg nog and see what the numbers tell us about our average ScrumbleShipper.

First off, approximately 13% of all entries were "Jerk" entries - People submitting random pictures, stock photos, or just copying others' photos in an attempt to get a free copy. For shame! They got nothing but lumps of coal in their email inboxes. I err'd on the side of caution here, assuming that grainy, possibly photoshoped, and other questionable pictures were the real deal.

Of the valid entries, about 34% (~1/3) were the "Forever Alone" variety- People cuddled up to cats, dogs, a rabbit, a parrot, stuffed animals, and a hand drawn sign with the word "friend" written on it.

Oh, and one poster of Legolas: 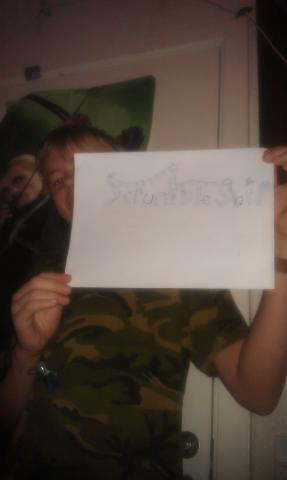 With a whopping 54% choosing to draw their own ScrumbleShip banner rather than using the pre-made one, it turns out that ScrumbleShippers are very creative! Of those, the vast majority drew their own unique designs rather than copying ours. Kudos to all you artistic Scrumblers!

Many faiths were represented in the contest. Well, ok, the only faith that really made a showing was flying-spaghetti-monsterism, with 6% of submissions from dyed-in-the-sauce Pastafarians. Have you been touched by his noodley appendage? 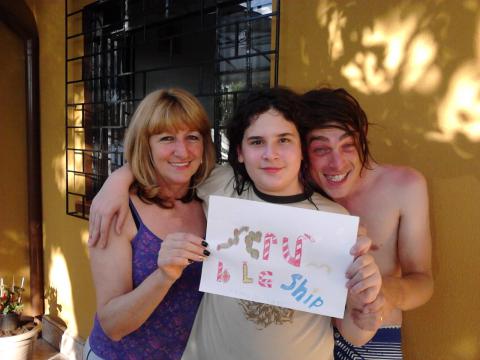 People from all over the world took part. I don't have exact numbers, but some pictures seem to suggest a sunny Australian Christmas instead of a frigid North American/European one. At least, I hope that guy isn't standing outside in 20 degree weather without a shirt.

With $1,200usd worth of ScrumbleShip given (More than I've sold in the past two months!) and 50+ hugs caused, I'd call this event a rousing success!

If you'd like to see all the public hug photos, click here. They'll be available until January 30th.

Curious about the game?

So Legolas is getting a copy of Scrumbleship? There is nothing like glassing entire Mordor from space, I guess.

Congrats on the success!

Congrats indeed! I'm glad so many more people now know the joy of ScrumbleShip - and that they'll probably tell their friends! ;D