Ran into a snag with the characters, should have it fixed for the Grumpy build on Wednesday.

When we created our characters initially we looked into how the characters from UT3
were created and based our information off of that. Information such as poly and texture limits.

One of the things we noticed was that each character had two materials; we took this to mean you could have up to two materials per character. What we did not realize was that even though yes you can have two materials for a character you can only have one per part (Head, Arms, Torso,
etc).

Our characters when created had two materials, one for the base skin and one for their clothing and "extras".

The annoying part is that the characters look perfectly fine in the editor preview as well
as the character customization screen. They only look broken in the game.

Our character artists are working quickly to fix this issue and as I said we should have updated textures and materials by Wednesday. 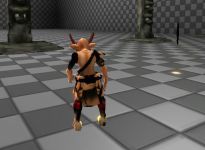 Update: For all intents and purposes, this issue has been fixed. Onward we go! ~ShadoComp

Thank you, hope to show you more soon :)