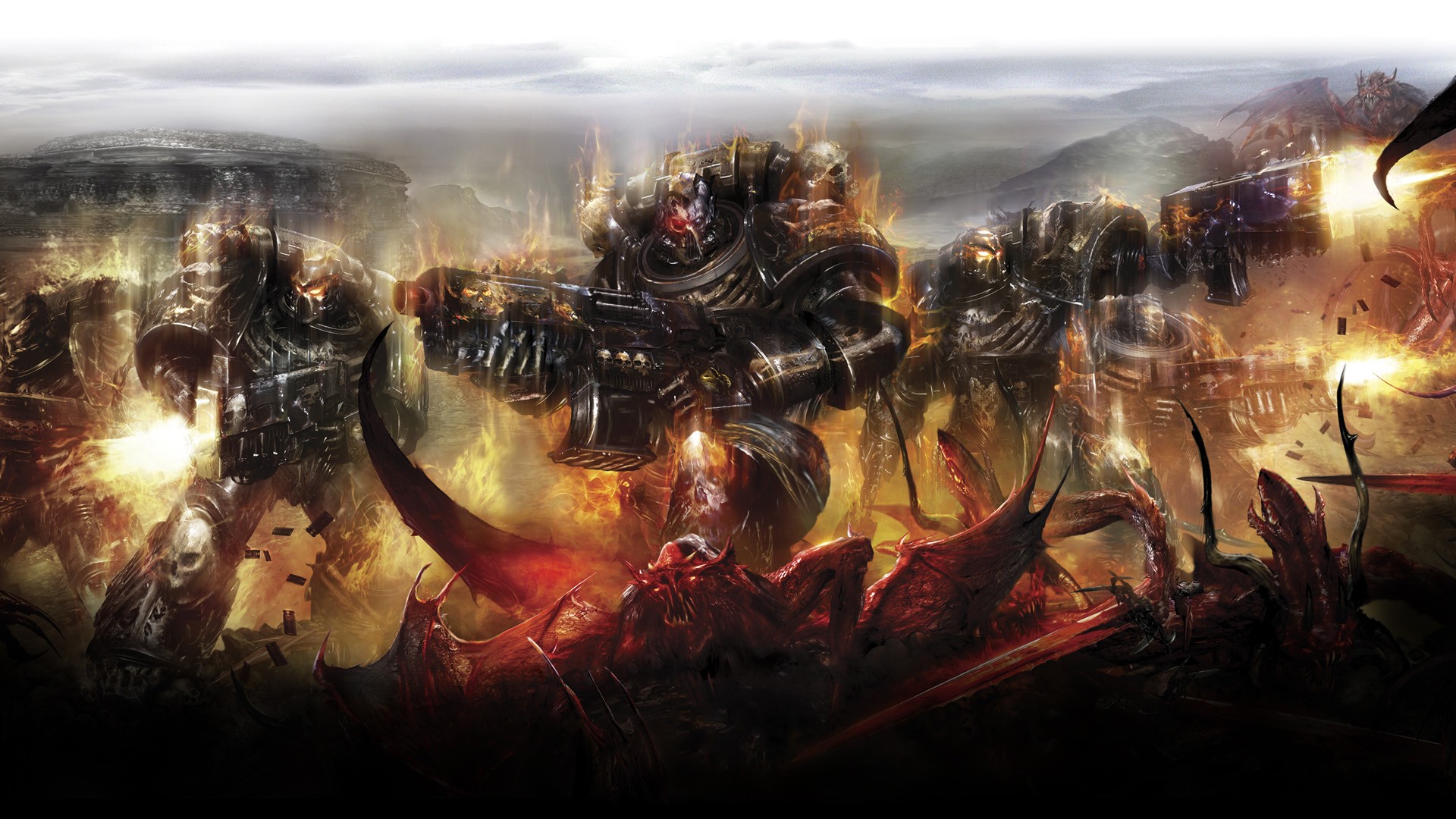 the Chaos Marine Legions were nine of the twenty Legions of Space Marines who fought in the Great Crusade for the Imperium of Man. At this time the Warmaster Horus, first among the Primearchs, and the Luna Wolves (later the "Sons of Horus") were corrupted by Chaos and instigated the galaxy-wide civil war known as the Horus Heresy.Further background to the Chaos Space Marines is explored in detail in the 'Horus Heresy' series. After the death of Horus and the end of the Heresy, the remnants of the ten Legions along with the other Imperial forces that had joined Horus escaped into an area of the galaxy known as the Eye of Terror. Due to the nature of Chaos, and the temporal instability of the Warp, the very same Chaos Marines who revolted against the Emperor continue to fight against the Imperium.The Legions have kept their old names, with the exception of the Sons of Horus who were renamed the Black Legion by their new leader, legendary Abaddon the Despoiler. Besides Horus, two other Chaos Primarchs were believed to have been killed during or shortly after the Heresy (Konrad Curze of the Night Lords and Alpharius of the Alpha Legion though Alpharius is believed to still be alive, possibly through his Twin Brother, Omegon) The seven surviving Primarchs have since become Daemon Princes. These daemonic Primarchs rarely take part in the affairs of their Legions or any part of the epicWarhammer 40,000 universe. For example, Magnus the Red, Primarch of the Thousand Sons is the most powerful of all the Daemon Prince sorcerers. Yet he rarely enters the battlefield, even though prior to the Horus Heresy he always took part in his Legion's battles and was a determined warrior. Angron however, Primarch of the World Eaters, led an invasion force in what was to become the First War of Armageddon, where he was banished for 100 years by a group of 100 Grey Knights led by Brother-Captain Aurellian. Some of the Legions have pledged a particular loyalty to one of the four Great Chaos powers. The closest thing to a leader that has appeared among them is Abaddon the Despoiler. Abaddon is the only Chaos Marine since Horus to be able to command the loyalty of all nine Traitor Legions, and has led thirteen Black Crusades against the Imperium of Man. join the chaos army link = Moddb.com

join us in battle!!

Hear my warnings, unbelievers. Carried to your minds by the power of the Prince of Excess himself. We have raised altars in this land so that we may sacrifice you to our gods. Veterans of ten millennia of unholy war wait to grind you beneath the treads of their mighty boots. The chosen of Khorne hunger to add you to their bloody tally. The Blood God himself has marked this land, and will claim your skulls for his throne. There is no hope in opposing the inevitable. Put down your arms, unbelievers, and bow before the forces of Chaos Undivided.

This is our galaxy. Ours to corrupt. Ours to enslave. The gods will not be denied their prize.