The last time, we talked about the forest level and how we managed to get around some of the limitations of the engine. This time, we'll focus a bit more on the second level, the manor. When the survivors get out of the forest, they must reach the highest point of a dusty manor and try to launch a distress call from the radio.

The last time, we talked about the forest level and how we managed to get around some of the limitations of the engine. This week, we'll focus a bit more on the second level, the manor. When the survivors get out of the forest, they must reach the highest point of a dusty manor and try to launch a distress call from the radio.

Since we first talked about the campaign, some people asked the following question a few times : Will you be paying homage to any movies or games? Is the manor the same as the mansion from Resident Evil? This is one of the questions David from GamesModding.com asked us a few days ago, and the answer is no, not really.

We're paying homage to multiple things and we're borrowing from multiple sources for inspiration, but we're not trying to reproduce anything existing. [...] I personally think it's uninteresting, people should try to innovate and create something new and fresh instead of always copying and reproducing everything from game to game. The original work/game will always be the best. Our primary sources of inspiration are the Canadian mountains and a bit of Dawn of the Dead for some details. [...]

When we first imagined the manor, the campaign wasn't even born. It was still an early prototype of what could become a single player horror adventure. We had a lot of troubles to find how we should handle this manor, how many rooms it should have and what should be it's global age and state. At first, we decided to go for an exact copy of the Disneyland Resort Paris Haunted Manor, it was so cliché that we couldn't miss the point. But eventually, we never found how to develop this idea. Wooden manor were usually not large enough to contain all the space we needed. Which means a lot more than what you can found in the last level's mansion of Blood Harvest.

We browsed hundreds of plans from dozens of real estate websites until we found something that could suit our needs perfectly. The manor is called Fontainebleau, just like the French castle, but it has nothing else in common. We studied the plans, built a prototype in Hammer and spent many hours trying to figure out a path between the numerous rooms. I (Nicolas) built the prototype, expanded it and moved away from the original plan until the gameplay path got pretty solid. Then, Marc took over the prototype and decorated the whole manor with the help of the team (it's not so easy to find a unique idea for more than fifty rooms). The process mostly destroyed the original manor and transformed it into a dusty emmental.

The final ambience progressively moved from "haunted manor" to "recently abandonned manor" and the main idea behind it became "provide the players with an extremely closed environment", just like the hospital or the apartments in No Mercy, but without any defined path and with a darker setting (watch out for your teammates). It's up to the players to make their way to the highest room of the manor and there's a lot of solutions to reach it. Let's just hope the final Left 4 Dead SDK will provide an easy way to compute multi-paths between indoor and outdoor environments.

Stay tuned for more developer banter until the release.
... and be sure to read the little interview on GamesModding.com. 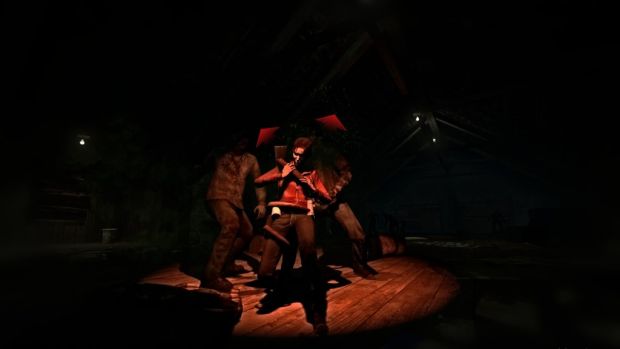 this is starting to look awesome

I'm very, very interested. Keep up the great work, lads, I can't wait to play it!

L4D kicked *** when it came out but slowly got boring due to the lack of new campaigns and weapons, this should make it worth playing again, for a little while atleast.

If only Valve would be kind enough to finally release the god damn SDK.