Build 4 of the Blade Symphony beta is live, bringing a host of bugfixes and changes suggest by our community as well as a new map, Monastery!

Hey guys, we’ve just pushed out Build 4 of the Blade Symphony beta! People with Sidekick issues can grab a beta build here which might solve their problems. Server admins (and people who still have connection issues after updating Sidekick) can grab the Build 4 server package here.

What’s more, Build 4 includes a surprise for you guys - this marks the release of our second map, Monastery! (Also added: bows and flourishes, auto-ready on by default, and a new tournament mode which is also on by default.) 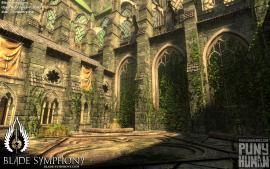 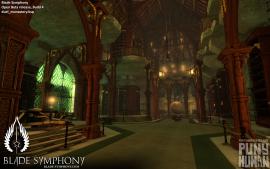 Left: Monastery's Cloister, which the map's other arenas are wrapped around.
Right: The Library, a longer arena fit for cinematic dueling.

Top: Andante Incendia, a new sword that pampers has most recently finished.


But before I link you to the changelog, a few items of news:

That’s it for the news today; here’s your changelog:

Fun build, but I don't like the wait time between fights that's been added, or the sound the Katana has in fast mode(sounds cheesy), various other issues with the new GUI.

Nice sword though, fun map, but it's busted, can't join that one room made of stone.

The waiting between duels will be tournament mode, that is set by default but it can be changed by a server operator using the command vs_queue_mode 0.

Well I think it should be off by default is all. Alot of people were complaining bout it in the servers I was on, most server operators didn't know it was optional as far as I could tell.

Let's be honest; not many people read the update logs for games these days.

WEEEEE. Finaly next beta. Great work, as always. Keep it up.

You're saying you don't need to donate to play the game, but in fact i've tried all the 5 servers and was kicked by every single one because they're "donators only".

This SideKick thing isn't working for me at all allthough i registered on the forum and activated the account.

The installer was missing the .dll files and as said before, sidekick didn't work, so i had to use the server zip file instead.

Now i'm at least able to actually get ingame, but ain't got the chance to play the game on a server (which is the purpose of a multiplayer online game, right?).

All of the above is sad because this seems to me like a unique and well made mod with a lot of potential.
Not sure why you're hindering people to play it.
If you would just try to raise funds, there are much easier and faster ways of doing this then creating a mod, so what's the reason behind this if i may ask?

if you got into the beta through a code you should use the information that was emailed to you with instructions on how to install the beta instead of your forum account details.

the only two ways to currently play blade symphony are by being a phan or through one of the codes that have been given out.

if you got into the beta via one of those ways and are still having issues please join the puny human irc channel #punyhuman on irc.gamesurge.net and someone will be able to assist you.

Allright, seems like this is the reason.
I was not aware that this mod is in closed beta, my bad.

But i guess i'm not the only one who somehow didn't notice that.

I'll surely check it out again when there's an open beta or final version available.

Are you "Kraid" on the PunyHuman forums? If that is you then your problem is that you have not put your Steam ID in your forum profile, this is required for you to gain access to the beta. To find your Steam ID go to the following site. Steamidfinder.com

Yes i am. Updated my profile now with steam ID.

Did that fix the problem?

I want to play this!! Please give away more beta codes!