You have a problem? I got a bomb! I think they said it was called a Dynamite!

Player can throw bombs with the left arm. They can be thrown varying velocity/distance by holding the throw button down. The bombs are thrown when the button is released. If the bombs have enough velocity when they hit a wall they explode. They also explode on contact with enemies and after 3½ seconds.

There are 3 different bombs with unique functions:
Dynamite: has a good old big red/orange explosion.
Poison Grenade: explodes into a cloud of poisonous acid.
Shock Bomb: the force throws the enemies into walls & each other and stuns them.

The claws also became a chargeable weapon. Quick tap on the attack button makes quick hits with the right claw. Medium charge hits with right and then left. Max power does a jump/pounce attack, which is also useful for moving around quickly and jumping higher than with the basic jump.

It may become possible to flip the bomb and weapon arms. At least the player models have animations both ways.

The armor points were removed. Thought player and monsters would have permanent armors with different protection against various damage types. The colors on the monsters may indicate some resistance to some damage type. Red colored monsters would be more likely to survive fire and explosions than green colored monsters, while the green ones would swim through acid and breath the poison fumes like fresh air. Player characters also have 5 different colors, which could also affect the armor, although they were meant to be team colors.

The monsters got some changes into their player detection ability. If they hear loud noise from weapons or player's movement, they can notice player. With the crouch/crawl mode, player could sneak right next to a monster from behind. They can also forget player if they don't see/hear him/her for a while. Don't know how useful feature this stuff is. 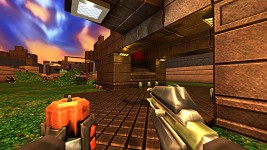 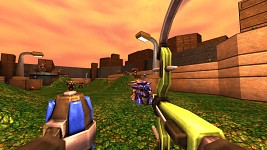 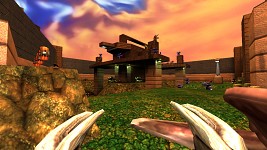 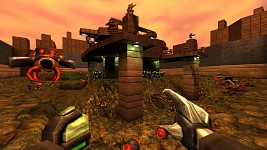 These screenshots & the videos have "r_glsl_offsetmapping" turned on. Rocks and stuff can be more bumpy looking. I need to tweak the bump maps for other textures to work with the offsetmapping. Currently most of them are too low contrast/bright to have enough effect. 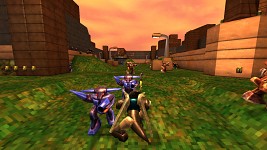 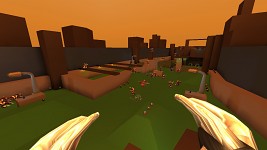 Using "gl_picmip_world" and "gl_picmip_other" console variables the game can look something like my first ideas were for this game. The single color blur textures can be useful in serious deathmatch games or whenever texture details start to bother. As DarkPlaces engine allows different picmip settings for models and levels, the models can keep their color detail even if the level textures are total blur. The model textures are meant to be like the heavy blur textures anyway.