Why a Blue Mondoid? Perhaps it’s because you’ll let out a cuss-word in surprise and delight at the treats in-store for you below? Maybe Zombies turn blue, as well as green, sometimes? Perhaps, just perhaps, it’s because the guy writing this really likes the songs of New Order. Who can say?

Why a Blue Mondoid? Perhaps it’s because you’ll let out a cuss-word in surprise and delight at the treats in-store for you below? Maybe Zombies turn blue, as well as green, sometimes? Perhaps, just perhaps, it’s because the guy writing this really likes the songs of New Order. Who can say?

Over to Lemmy for a quick description of what you’ll see in our latest, long-awaited, animations video.

“This is still WIP, and is just a demo of a few new things in the new animation system. General running will be separate from a sprint ability, which gives you a boost to speed but quickly tires you, lowers your ability to manoeuvre and increases a risk of a fall or collision.”

“Characters will have much more physical presence in the world, and inertia and change of speed is now a factor with regard to animation. This will also allow us to branch off different ramifications given the character’s mental and physical state. Panicked survivors who are not looking where they are going may run into problems (quite literally) while unfit, clumsy or undexterous characters may perform actions slower, or be more likely to mess up, fall or perhaps fail to scale a fence at an inopportune time.”

Mondoiders with keen memories might remember that may remember back in the days of Build 25 there was talk of a Tutorial that would teach the most basic of basics to new survivors. A script was written and initial code was tapped in – but then tasks elsewhere diverted our attention and the poor thing was left on the shelf for a while. Left alone that is… until a brave Frenchman called Romain ‘RJ’ Dron found it, blew the dust off and finished it like the dreamy gallic hero he is!

Now a part of Build 32, the tutorial is an introduction to the mechanics and ambience of Project Zomboid – and should be quite fun for established players to check out too as there’s some fun forced-feeding of rotten foodstuffs along the way. We’ve been sure to write it so it complements the more narrative tutorials of Kate and Baldspot, when they return, who’ll be more concerned with ‘advanced’ gameplay. This tutorial is very much aimed at making new players feel less confused in their very first couple of minutes of gameplay. 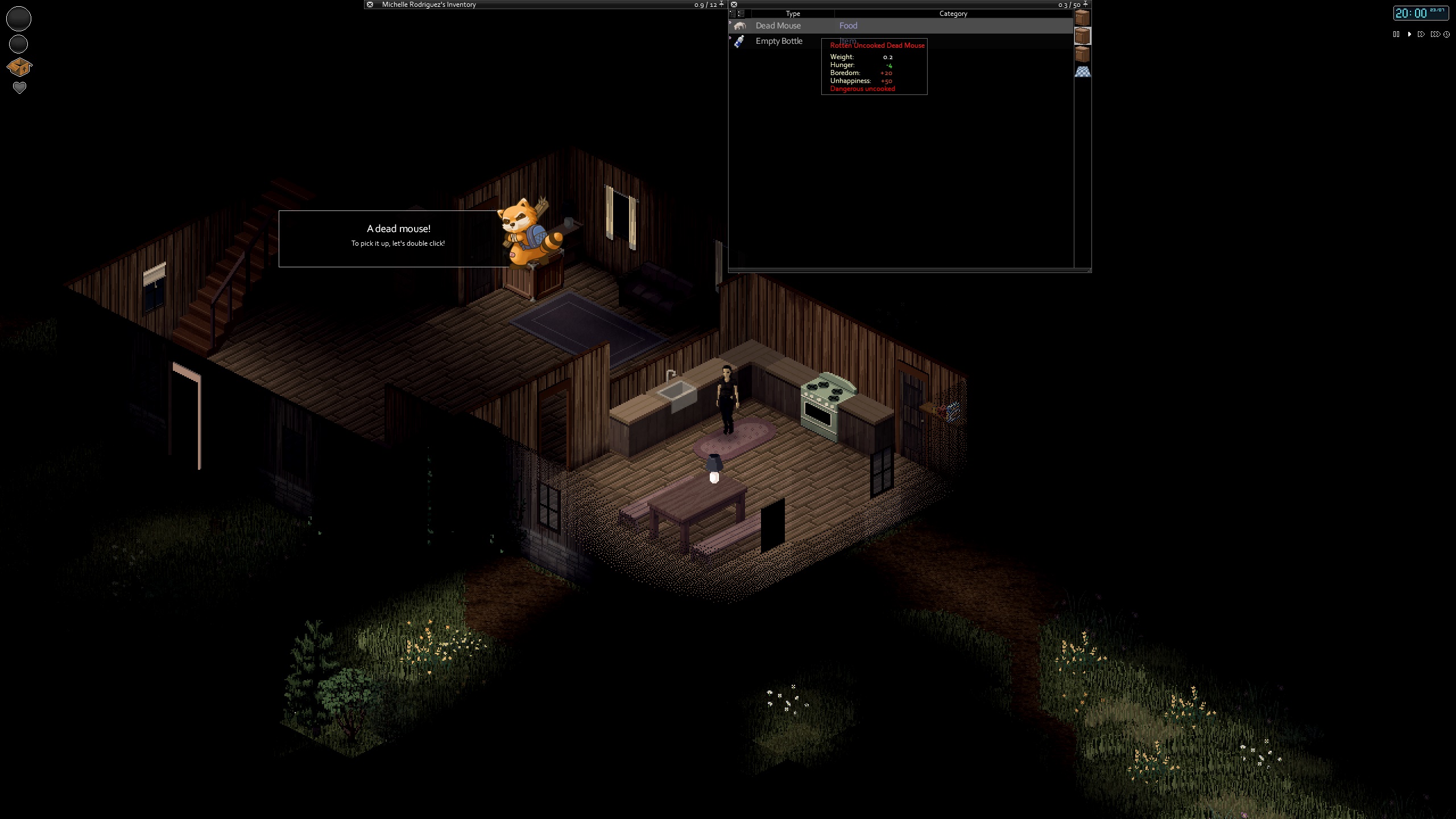 TURBO AND WILL ADVENTURES

Okay, so slight annoyance time. The coders have left Writer Will [that’s me, hi] in the dust and he’s not comfortable with his radio and TV spreadsheet going into Build 32 as a WIP. He needs extra time to polish, proof and be sure the multi-channel coverage of simultaneous events is watertight. So, sorry about that one.

In ‘positive spin’ news, however, this does mean that players will be getting the entire radio system when it comes to Build 33 – incorporating all of Turbo’s player-to-player transmission system brought over from his ApCom mod.

Turbo is simultaneously working on a system for those who’d like to customise their safehouses a little – letting you rotate and move (via your inventory) certain items of furniture, paintings, items and vegetation. More of which we’re sure you’ll hear a lot more about after Build 32 is released and the build-up to 33 begins. [Although seeing as a lot of the groundwork for all of the above has already been laid, it presumably won’t be a hugely long wait as far as PZ updates go].

In the background mappers continue to set out the foundations of Louisville, EP’s doing stuff with zombie population management that’ll make you tingly and we’ve also got various other cool things we won’t tell you about until they’re a smidge closer. All cool stuff. Have a lovely week everyone!

This week’s Featured Image is Lenged91’s ‘Pride and Joy’ safehouse. God bless her, and all those who cower within. Would you like to receive weekly updates on Project Zomboid? How about every Monday or, as the cooler kids say, ‘Mondoid’? Follow this link for voluntary enlistment.