I remember when you talked me about your basement, and the noises coming from it.

Hello dear Chico, how was your holidays ? Did you have any gift?

Chico: Hola Fran, yes I got a new orange sweater.

Great, I got the affection of my family and the joy of my beloved friends... talking about it, lets talk about fear.

Coming back the last post, I told you about the "don't show" thing, the classic trick to generate fear in the player/viewer. So lets take an example.

Imagine you are walking in a creepy house, you start to hear a strange sound. At first you think that it is the wind, but then you approach the basement and the sound is more clear, like claws scratching. You walk down the stairs and open the door.

Right now you are scared, in your mind a strange evil creature stands behind that door, this is the classic horror where you "don't show", the player/viewer imagine the scariest in his mind.

But what happen next? The guy opens the door and... you have two choices:

But imagine that you don't want to show the creature but still want to keep the fear. You have to show something in the basement or have to give a new clue to the player, like a diary for example. We can keep the tension only putting the diary over a table in a creepy basement, but I propose to grab the player/viewer by his guts. 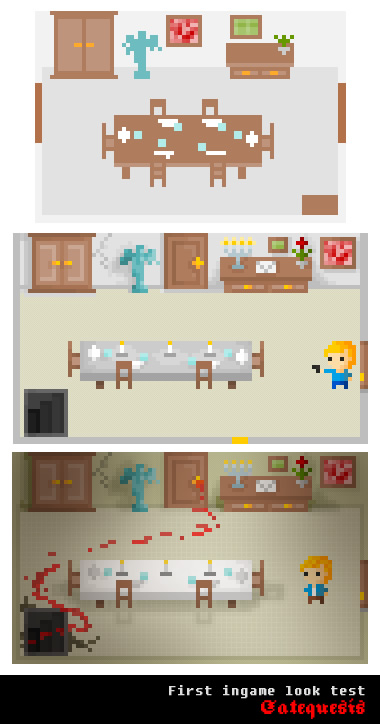 Come back to the creepy house... you are hearing claws sounds then you open the basement door, the sounds stop. Inside the creepy basement you see a white blanket covering something... or someone. You get closer to the "thing", it's like a body and his covered hand grabs a book. Suddenly an internal blood star to cover the blanket, you are afraid but you still approach to focus on the book, get the book and you realize that it is a diary. You start to read without noticing a black snake crawling out below the blanket. Suddenly while reading an important part in the diary, the snake bites you in the leg.

Chico: Ok, that's creepy, weird and mark the player. It's like there is something to solve, something deep.

You can change the bloody blanket for a weird statue, or a girl in a corner with his face hidden, or a man with a mask talking to you in a strange language, or dancing backward.

You can only have two rules to make this fine:

This way you will show dangerous things that the player can't understand, so they will be scared by them.

Let me put it this way : I can't be afraid of any chorizo, okay ?

I'm french ( you should have guessed it by the nickname ;) )