Hi this is update about great Japanese battleship IJN Yamato 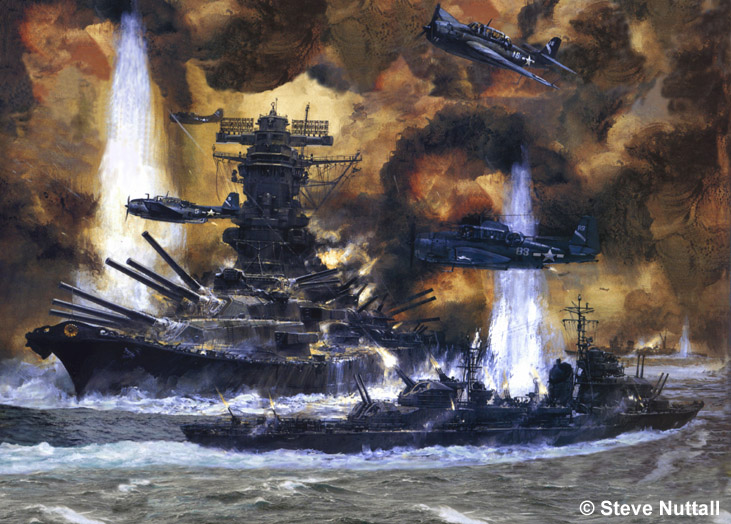 As the KMS Bismarck was to the Atlantic Theater so too was the IJN Yamato to the Pacific Theater. Undoubtedly the most powerful battleship ever built, the Yamato was a mammoth ship design bristling with cannon and machine gun power backed up by armor that reached close to 20 inches in spots. The Yamato was to own the Pacific Theater and might have done so had the aircraft carrier not solidified its presence in the conflict as the new king of the seas.

With international treaties limited new warship construction to a reasonable 35,000 tons, the Imperial Japanese Navy set about to construct the massive 65,000+ ton Yamato and her sister ship, the IJN Musashi, under a cloak of secrecy so as to avoid disclosure. Such was the development of the type that the Japanese public was shielded from its construction and the Yamato was only revealed to a few Japanese high ranking officials. Great care was also taken to ensure the secrecy of the shipyard itself, which was partially covered to avoid detection.

Design of the Yamato was a special one - not only was she to be the most heavily armored battleship ever made, her main gun mountings exceeding 18" would be the largest caliber types to ever be fitted the type. These elements required a large foundation to operate from and an equally large superstructure to support the floating arsenal. Though to some this may seem a extreme, there was a method to the direction for the Imperial Navy knew that any US battleship constructed to take the Yamato on directly would originate from the east coast of the United States. To make it to the Pacific in due time, the new American vessel would have to pass through the Panama Canal to access the Pacific Ocean. If the Americans attempted to build a matching battleship to the Yamato, the sheer size of the new battleship would deem the Panama Canal route impassable to the extreme.

Outwardly, the Yamato followed traditional design elements found in warships prior to the Second World War. The 18.1" main guns were housed in three heavily-armored turrets with two located forward of the bridge and a third aft with three guns to a turret. Amazingly, the Yamato was fitted with 12 x 6.1" and 12 x 5" guns to supplement the main guns for a very potent firepower capability. Anti-aircraft defense was given priority as well and was left to the 24 x 25mm cannon systems and 4 x 13.2mm machine guns. Inwardly, she made heavy use of arc welding to ensure a strong seal and featured a plethora of damage control sections under the waterline. From bow to stern she measured over 800 feet and was over 120 feet at the beam. Because of the secrecy involved in development, the Yamato had to forgo any formal launching ceremonies when she set out for trials on August 8th, 1940.

Serving as the flagship of Admiral Isoroku Yamamoto, the Yamato nearly took part in the Battle of Midway in 1942 but failed to even arrive within range of her main guns. After that near-engagement, the Yamato took on a new look with its armament, having several of her 155mm turrets removed in favor of anti-aircraft systems. On the move once more, the Yamato and her sister were called into action in the Battle of Leyte Gulf, with the Yamato utilizing her main guns for the first time, in 1944 which the Musashi was lost to American Navy air groups. The resilience of the Yamato continued on, however, suffering little critical damage from direct hits from bombs and torpedoes alike. She definitely was starting to fit the part of the invincible ship.

By April of 1945, the last-ditch plans of the Empire of Japan were being laid down. Among those was to sacrifice the Yamato in what was for all intents and purpose a suicide mission at having the great battleship run aground off of Okinawa to provide a stationary and permanent defense base off the coast. American Navy planes, already on patrol to find the Japanese Task Force, located the mighty ship and engaged. The Yamato was hit with conventional bombs, armor piercing bombs, high explosive rockets and cannon fire, dropped from low altitude to ensure direct hits. As expected, uncontrollable fire soon began to take over portions of the deck and sub-decks. Unrelenting additional attacks ensued throughout the day, this time with bombs and torpedoes. The Yamato could do little as her anti-aircraft positions were put out of action and her larger ordnance proving useless against aircraft. She began listing and taking on water to which the order to abandon was given. As the fire spread uncontrollably at this point, a massive ammunition explosion (reportedly seen from the southern part of Japan itself some 120 miles away) officially did the vessel in, allowing just 280 of her crew to be rescued. The battleship as a type was sealed by airborne elements of a carrier group positioned miles away - the aircraft carrier had arrived. The Yamato sank in just two hours after incurring some 13 torpedoes and 6 direct bomb hits.

The IJN Yamato was officially sunk on April 7th, 1945 just north of the island of Okinawa. She was orignially ordered in 1937 and laid down that same year. The vessel was launched in 1940 and officially commissioned the following year serving until her ultimate demise. A museum at Kure, Japan has been set up in her honor and contains a 1:10 scale model of the mighty ship.