Another big update on URR's procedurally-generated conversation and speech system!

Posted by UltimaRatioRegum on Feb 4th, 2017

Another big update this week! (Isn’t it great to see URR development actually moving fast? At least, I think it is). As mentioned last week, I prioritised getting the basic conversation system totally finished this week, which is to say the ability to ask any question to any NPC, and get a logical reply, or at least the outline of a logical reply with some variables (like “[nation]”) that need to be filled in later. We had a lot of progress, and almost, but not quite, got there. But don’t worry! Other essential stuff for this release has been done instead of focusing 100% on the basic conversation system; we have still moved much closer to release in the last seven days, albeit in a slightly unexpected direction, by adding a range of other world detail that NPCs will shortly need to draw on when they reply to the player. I can also now finally announce some pretty big and very exciting changes to my life coming in the next six months, some projects ending, some new projects on the new, and what this all means for URR in the next half-year. Read on!

Basic conversations have been developed further this week, with NPCs now responding correctly to almost 100% of the large number of “option” queries they can be asked – which is to say, questions that need to draw on some other information and are fundamentally different depending on the outcome of that information, rather than simply being sentences which say “My homeland is X”, in a context where all NPCs will always have the same basic answer to that question. Option queries need to draw on a range of traits in most cases (within the NPC) and a range of broader cultural and religious elements (outside the NPC), and most of this code needs to be hand-written for every possible question, making it a fairly substantial piece of work. From these screenshots you can see that some bits of wording still need tweaking, but I want to stress, these are totally random selections from the hundreds of possible questions; although they aren’t perfect, I’m still extremely pleased with how these look right now, how much variation there is, and the fact that only some fairly minimal tweaks remain to be done to some minor typos, plurals, that type of thing. (Both of these is me talking to the first character I find, hence why I’m clearly talking to people from the same civilisation as me for the sake of these tests): 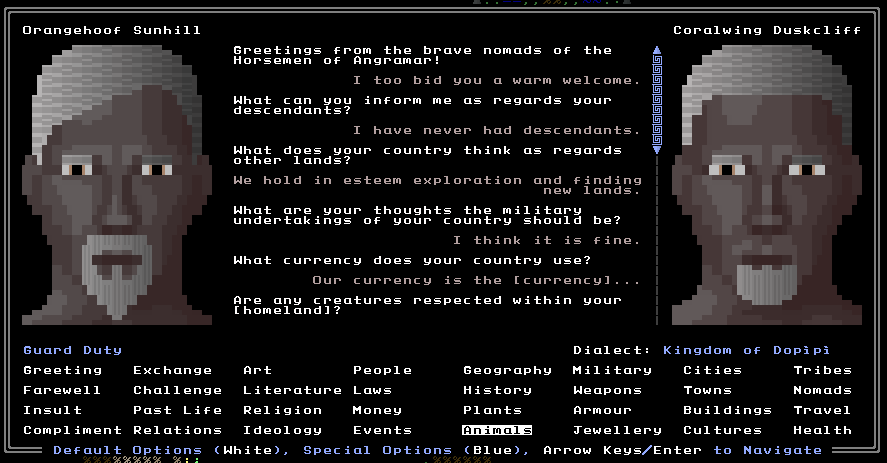 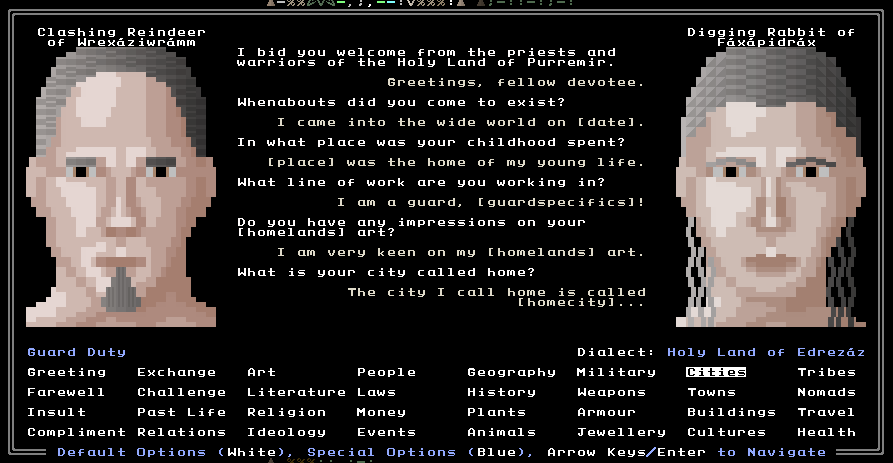 This week I have also begun implementing “irrelevant” replies – meaning things like “I have no religion” as a response to “What is your religion?”, and so forth – which apply when an NPC is asked a question they have no valid answer to, or is entirely irrelevant. This means a massive range of potential answers, some of which are specific to the question – such as “I have no siblings” – whereas others are more puzzled. An NPC might be asked about a painting they couldn’t possibly know of, for instance, in which case they would say “I do not know of that painting”. There’s close to a hundred of these irrelevant replies, all of which (like everything else) need to vary between cultures and individuals. Some of these require quite complex sentences, although others are relatively simple, but this has definitely need a substantial task. I’ve now put about fifty percent of these in place, and NPCs do correctly use them, too! Of course, in some cases NPCs can’t yet give the correct responses – the coding for siblings isn’t in there yet, so everyone just says they have no siblings – but the code for generating a sentence once siblings are present is in place. Dealing with these kinds of familial relationships and the answers to some of the more complex questions will come partly before the release of 0.8, and partly in the speedy 0.9.

Added some new traits this week, with a focus on four elements that will influence substantially what NPCs know (and what NPCs can tell the player) about the world around them. These are all affected by the individual classes of NPC – generally speaking someone who is likely to be wealthier and better-educated is likely to know more, but there is also significant variation written into the system, and the knowledge of individual NPCs (regardless of their NPC class) is then varied further by ideological preferences of their homeland. For instance, people from an internationalist nation will tend to know more about foreign matters; people from a nation with a system of vassalage will know more about their own nation than average; those from a bartering nation will know less about history, as few records are kept; those from a free trade nation will know more geography, as they travel to trade; and so forth.

How much the NPC knows about the surrounding area. This doesn’t mean the nations and peoples and so forth, but rather purely a question of physical geography – nearby mountains, nearby roads, coastlines, deserts, animals, plants, and the like. Affected

How much the NPC knows about their own nation – where things are, who lives there, where towns and monasteries and mines and so forth are and what’s within them, information about important people, etc.

How much the NPC knows about other nations; their locations, capitals, ideologies, religious beliefs, leaders, famous people, practices, etc. As with all the above, this varies across NPC classes, and is then modified by ideological beliefs of the nations in question.

I’ve implemented the first part of the generation system for religious relics, which needed to go in now so that NPCs could actually talk about them. Naturally the image generation for these will take place at a later date, but for the time being the game can generate the names of religious relics, a little bit of information about them, and who they were originally owned by. Each religion will only ever create two kinds of relics, depending on their beliefs, and these fall into a randomly-chosen “major” and “minor” category. For instance, a religion might primarily produce “Crown” relics, but sometimes have a small number of “Bone” relics; or a religion might focus on “Book” relics with a small number of “Weapon” relics; and so on and so forth. Each has a unique generation system for selecting its name, and we can now end up with relic names like the following:

The game also now keeps track of how many relics need to spawn in each church (which varies across different kinds of religious building) and ensures that an appropriate number will always appear. Generating the images for these is going to be a lot of fun, but isn’t going to come until 0.10 or somewhere beyond. Anyway, these are now in place, so NPCs will shortly be able to talk intelligently about relics, and specific relics will now be tied to specific reliquaries in specific churches and cathedrals!

Three of the “list” questions (questions where the answer is often of the kind “A, B, C and D are examples of the X”) relate to the particular laws of a particular nation regarding various topics – currently “violence”, “trade”, and “religion” are the three listed in there. This means that nations now generate laws in each of these categories, and a set of punishments, and then assigns punishments to each broken law depending on the severity of the crime (as the nation sees it). Laws and punishments on trade are determined almost entirely by trade policy, but a nation’s perspective on smuggling is also affected by a range of other ideologies; “violence” laws are determined by a wide range of ideologies from across the eight main categories; “religion” laws are naturally primarily determined by the religious policy of the nation, with a few inputs from a couple of other policies.

To take trade as the example, there are now five possible laws that a nation can enact:

Each of these then, if appropriate for the ideologies of that nation, has a value assigned to it. When punishments come into play, punishments now vary according to the five possible justice ideologies. I’m not quite clear on how the “Ordeal” justice policy is going to work out, so I haven’t really developed that element yet, but the other four now work nicely. The Frontier policy imposes fines on those caught breaking the law; the Vigilantism policy will see those breaking the law hunted by the general public, who for lesser crimes will demand items in recompense, or injury, or will hunt to the death in the case of severe crimes, the Penitentiary policy imposes a range of prison sentences, and the Gladiatorial policy involves battles to first blood for lesser crimes, and fatal battles for greater crimes. There is also something of the god system from DCSS here; I wanted to develop these in such a way that they would seriously affect the player’s actions in the future, and which nations they choose to take actions in, when they keep in mind what the potential ramifications are. Justice policies should now have a substantial effect on player decisions once implemented – and, of course, NPCs can now talk about them, listing all the policies that are worth talking about in the area in question. 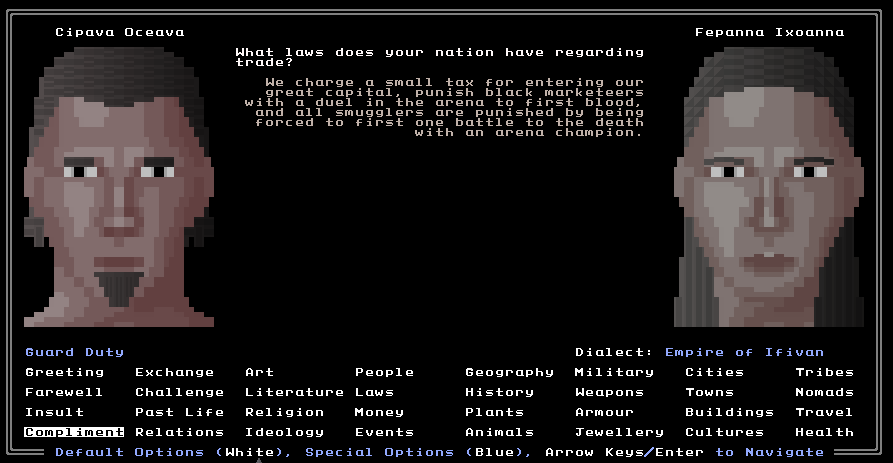 Thanks! So glad you like how it's shaping up :)