The procedural generation of crypts, military barracks, military stables, and even parliamentary buildings!

Posted by UltimaRatioRegum on Feb 22nd, 2015

First off: I am organizing the International Roguelike Development Conference (Europe) at either the University of Lincoln, or the National Videogame Arcade in Nottingham (both in the UK), probably at the end of June (27-28). We want everyone - developers, fans, journalists, whoever! If you are interested in attending, please let me know. I'm also giving the "keynote" talk at the North American IRDC (more information here) but the fellow organizing it really needs to know about numbers and those interested as soon as possible. John Harris, writer of the long-running @Play column, is also likely to attend, and I'm in the process of trying to get in touch with some interested North American games academics. Again, if you're in NA and interested in attending, please get in touch with either me (devlog, Facebook page, or Twitter), or the organizer via the Google form on the tumblr link I posted above. It is hugely important that we get some idea of numbers, especially for the NA IRDC, since one has never been successfully hosted in North America before.Now, onto URR (though I'm afraid the above message will likely pop up every few weeks on this blog, since I want to get as many people attending both as possible!).

My main focus this week has been on generating crypts. These appear below cathedrals and graveyards, and are quite rare - probably around half a dozen or so will be generated in the entire world. Those below a cathedral are home to religious leaders, saints, holy warriors and the like (assuming their bodies were recovered), and may also contain things like altars, religious archives, and various other things you'll have to seek out for yourself. On the other hand, crypts beneath graveyards are "secular" and focused on the ruling family/house of that nation, so contain past rulers, important figures from that house, and the like, and since that crypt is more public than one directly beneath a cathedral, you may (in 0.8) find some other individuals lurking around there as well. The "segments" that make up a crypt are, like so much else, dependent on the shapes preferred by the civilization, so you'll find crypts with lots of squares, circles, octagons, and various other shapes; they also vary massively in their layouts (I used a modular node-based generation system for these), and their "themes" - for instance, the top crypt of these two has a "desert theme" and sand has begun to flood in; the second crypt has an "overgrown" theme being found in a jungle; and there are several other, rarer, and pretty interesting themes which can affect the entire crypt. I'll probably have these themes spread into other underground areas as well in the future. 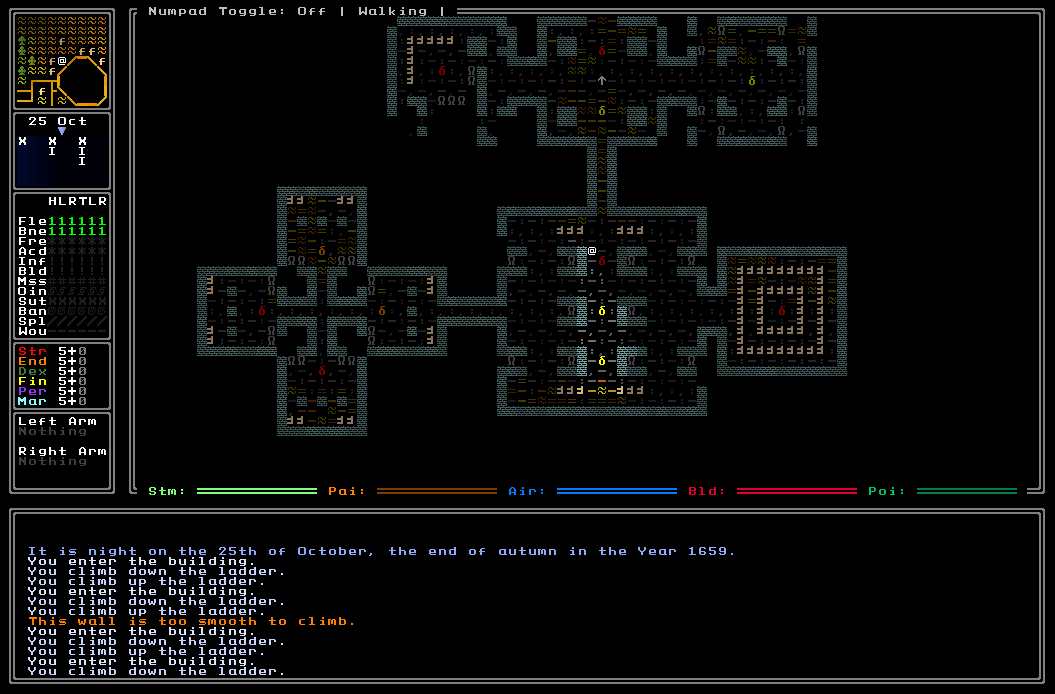 One interesting feature of crypts (and from this point onwards this will apply to all underground areas) is the lighting system. You see those yellow/orange/red symbols in the pictures above? These are candle stands or braziers, and in-game they flicker between the three colours, and provide light, even if you haven't explored what is between them. This means that you can sometimes spot areas distant in the dungeon which are lit as long as you have a clear line of sight to them, even if you cannot see what lies in-between. Experientially this makes for a very intriguing experience exploring an underground area which is quite distinct from other regions - as you explore you sometimes "catch a glimpse" of a part of the crypt you haven't yet explored, and it makes it feel more like "discovery" than some above-ground areas. Also, in 0.8 onwards unless you have your own source of light your FOV will be significantly reduced, so other lights in the crypt act as "waypoints" to guide you from location to location. The grey ohm symbols, meanwhile, are sarcophagi/cadaver tombs themselves, and I'll be working on the generation of the graphics for those (and their connection to family histories) soon.

One of the "small" buildings I worked on this week was the barracks, which spawn in huge numbers in the military districts of feudal nations, and can also spawn in much smaller numbers (but larger buildings) in the rare desert fortresses of nomads. The fortress barracks are on the left, the feudal fortresses on the right. Currently they only spawn beds, but in 0.8 or 0.9 you will also have piles of items for that particularly soldier - armour, weapons, clothing, etc - next to their bed. Doors sometimes spawn and sometimes down; some rare barracks will spawn with chairs or tables in as well as beds; but they're generally pretty compact, though they do have a decent number of different possible layouts (which are always consistent throughout a civilization). I've also (as per an excellent suggestion) made the glyphs for basic floorings (wooden and soil, in this case wooden) much simpler, and darker, to accentuate the contrast with the walls.

Not much to show here. They're stables, aren't they? And stables without horses. What is a stable without a horse? Who knows? 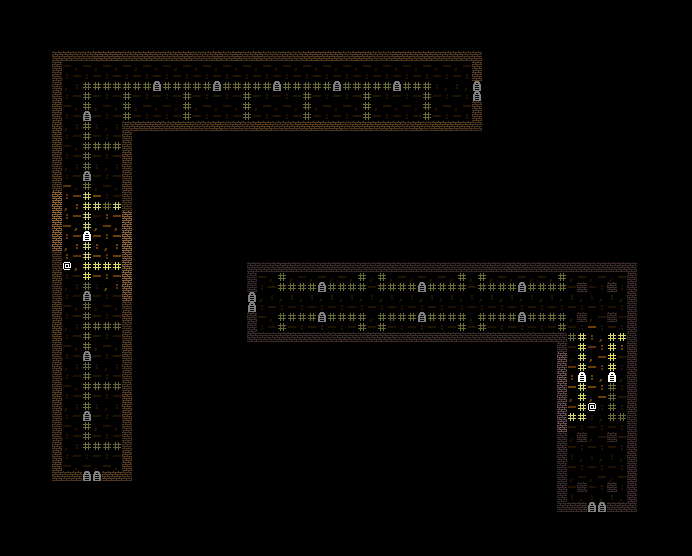 I've also got to work on parliament buildings for feudal nations that have "Representation" as their leadership policy. In this case they are ruled by a President/Prime Minister/First Minister/etc, and this person exists within structures like the Red Senate, the Wise Congress, etc. In 0.8 this person should therefore have a "schedule" of movement between the castle (which will obviously be different for a Representation nation than, say, a Stratocracy ruled by the military) along with an appropriately protective retinue. There are meanwhile four basic layouts for parliaments, and each one then has a wide range of interiors, which also vary according to a number of other civilizational policies (and just general preferences in other ways). They have several floors, and sometimes a bell tower, and as with everything/everywhere else in the game, I've implemented appropriate code to allow them to contain some intriguing hidden secrets. Parliaments will also contain significant histories on the nation in question, lots of important people, and probably also some information on criminals, new laws to be enacted, etc, but we'll figure that out later! As ever, I'm working hard to make sure every type of building looks distinct - admittedly Parliament buildings are pretty damned table/chair-heavy compared to others, but I still think it works (here are horizontal and vertical parliamentary buildings): 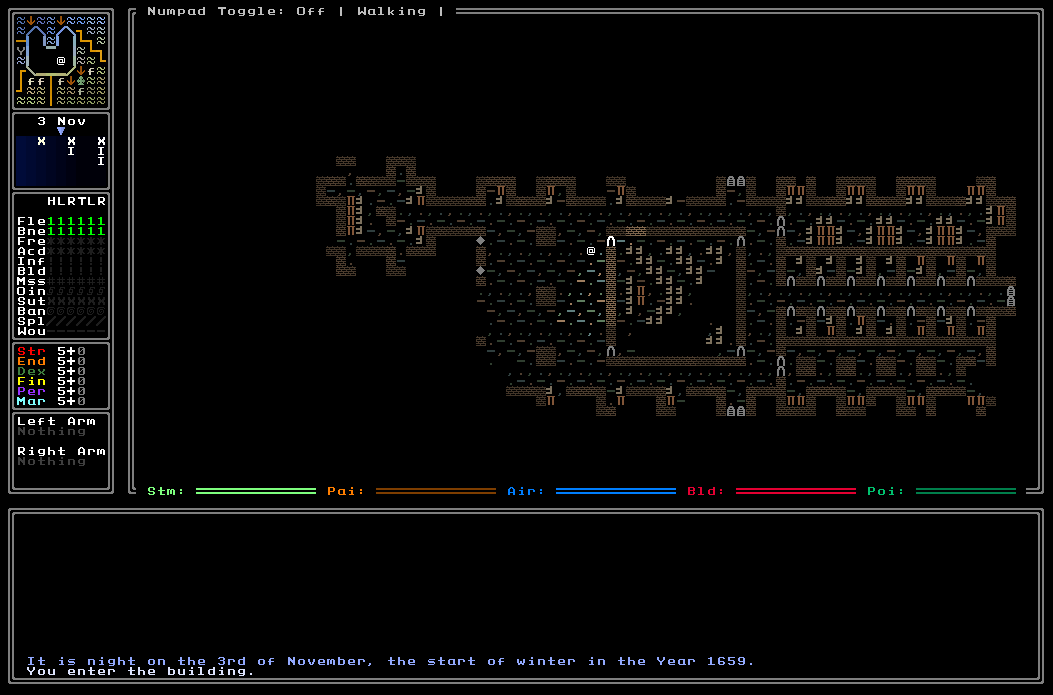 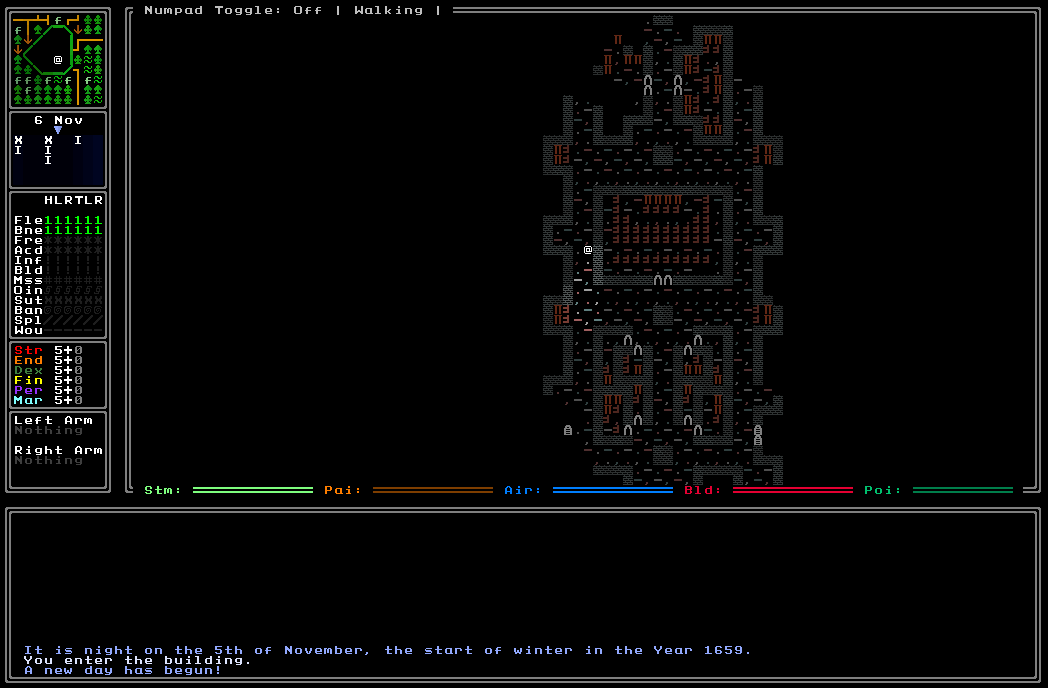 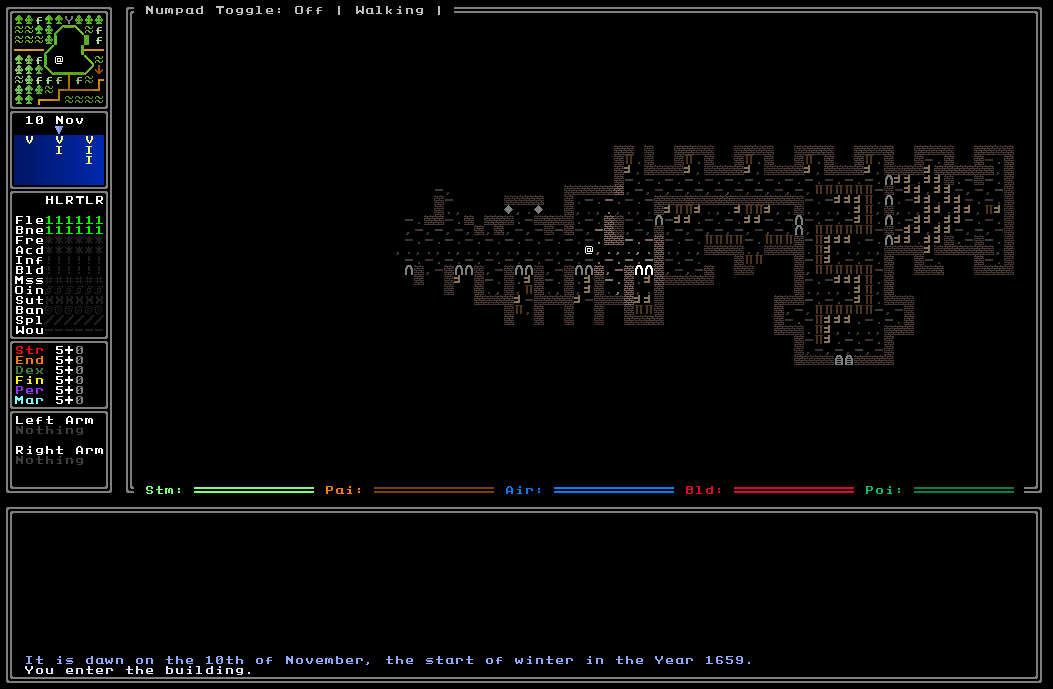 And you see those white diamonds? Those are PAINTINGS. Obviously those will be focused in galleries, but you might also find a couple in upper-class houses, parliaments, castles etc, and once I get around to those they will all be procedurally-generated and yield hints about the world. They will serve the same function as statues, but those are both big procedural jobs, so probably... 0.9? Maybe 0.8, but I doubt it, given that NPCs is a pretty colossal/massive thing to work on for 0.8.

(Also, I am aware the middle image looks like the Parliament of Mordor - was just a fluke from a civilization with a dark brick colour, and it was in the tropics, so dark woods are going to be used for the furniture!)

And that's everything. See you all next week for more procedural madness...

Sounds and looks very cool! I really like the crypts, nice details!

Thanks! The variations are pretty excellent, there are some themes which *massively* change their appearance but I haven't shown off here :)

This is going to be quite the world to explore, based on all the developments in the past months.

Thanks! I hope so, the world is definitely becoming denser and denser and more and more interesting to explore.