A run-down of the newly-implemented auction house mechanics for kaiju!.

It had been at least a month and a half since I'd sat down in front of my laptop and pried open the kaiju! engine code to continue my work; I was afraid I would be incredibly rusty (if any use at all). Surprisingly enough, it was like riding a bicycle, and I was soon back into a familiar programming "groove". The engine's nooks and crannies bubbled to the top of my memory, and I began plugging away at the bartering system I'd hoped to complete so many weeks ago.

Lo and behold, 48 hours later, it is finished! The only piece currently missing is a scheduled event which will both decrease the "time left" on all auctions currently in the database and also close auctions which have expired, returning the items involved to their original owners in the process. (Edit: This has since been implemented. Huzzah!) 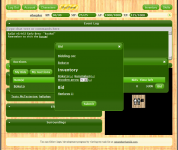 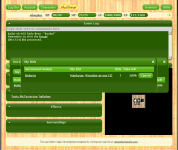 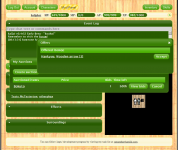 The auction-building and bid-building dialogs both work in the same fashion: Players move items between their inventory and the auction/bid "bucket" before deciding to submit their order. Stackable items can be added to bids/auctions in specific quantities, and each item name brings up that instance's description and stats when clicked for easy reference.

When players submit items to an auction/bid, their ownership of those items is temporarily dissolved. The items are owned instead by the system itself, and are either returned to their original owners (in the case of a cancellation/expiration) or transferred to their new owners (in the case of an accepted offer). This prevents players from using the same fodder for multiple bids and auctions, as well as preventing an item currently in an auction/bid from being dropped, broken, stolen, etc. before the transactions are complete.

Currently, the "Auctions" menu item is tied to particular buildings. Each building participating in the system all share the same auctions/bids data, so the auction house itself is universal. Faction-specific auction houses will be considered in later phases of development, and limits will be imposed so that the Merchant class's skills will become more meaningful. (For instance, they may be able to submit 20 items per auction, whereas an ordinary player would only be able to submit 5; or perhaps they would be able to place auctions with an extended expiration time.)

Some sort of "auction fee" will need to be implemented to prevent users from leveraging the bartering system as extended storage... but that's an issue for another development session altogether.

At some point, you might consider having a "suggested bid" line for the auctioneer to set what they are interested in receiving. I think the bidding side of things is subject to more abuse than the auctioning side if there's no limit to the number of bids you can make, so you might consider limiting that as well.

Not allowing people to cancel auctions/bids would be one method of controlling storage issues, as you wouldn't be able to get the item back until the auction was over.

The "Price" field acts as a "suggested bid". You manually type in what it is that you hope people will bid on your items.

I like the idea of not being able to cancel auctions/bids... or perhaps canceling them would take you out of the running to win the auction, but keep your items in limbo until that auction is over with.

As for limiting bids/auctions -- that is definitely in the works. :)

Ah, you're already ahead of me.

I know you want to avoid having currency and I heartily support this. So whatever 'fee' the auction takes the form of has to be something else that modifies the behavior of the players putting things up for auction.

One thing I was thinking about was having NPC merchants who 'buy' those items that are overly prevalent. I know you already have decay, so depending on how that ends up playing out you might not need item sinks. But if you do, I can see NPCs who provide services (heals, MP regens, whatever) taking goods in trade.