Good day, and welcome to the first ever instalment of our developer correspondence. Today, the 5th of December, marks 25 days before the planned release of our mod for Hearts of Iron 4 - Ante Rebellum. Today I'm here to give an overall picture of the mod you can expect on the 30th of December, introduce you to the team, mention how you can contribute and possibly hint at some future plans. Buckle in.

If you wish to view the timeline of the mod, from the point of diversion, you can read it here

Now onto the game itself. Let's first begin by looking at the world map:

Where to begin? Let's take a look at some of the countries that will have focus trees in the release version of the mod: 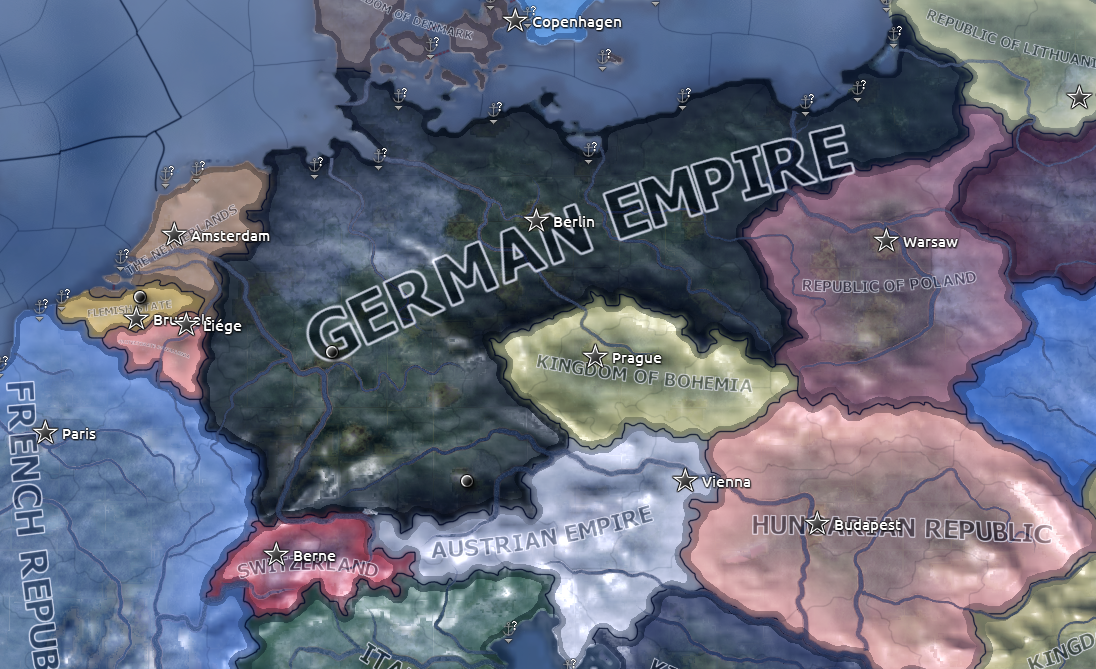 Germany is the strongest economy at the start of the game, and also possesses arguably the largest and most modern military. It begins the leader of the Imperial Mutual Assistance Pact, a faction composed of Germany's puppets Wallonia, the Flemish State & Morocco, and their allies in the Austrian Empire, with their puppet Bohemia. As you can see, Germany has few friends in the world. The newly born Soviet Republic to the east is growing in influence and might, whilst Germany's old enemy in the United Kingdom continues to attempt to grow it's influence over the world.

Germany is a constitutional monarchy - a parliament and chancellor lead Germany's legislature, but Kaiser Wilhelm II retains some influence over the state. Their only independent ally, Austria, is severely weakened, having been wrecked by civil war following the end of the Great European War. Germany seeks to expand its sphere of influence - peacefully if possible - to compete with that of the United Kingdom. 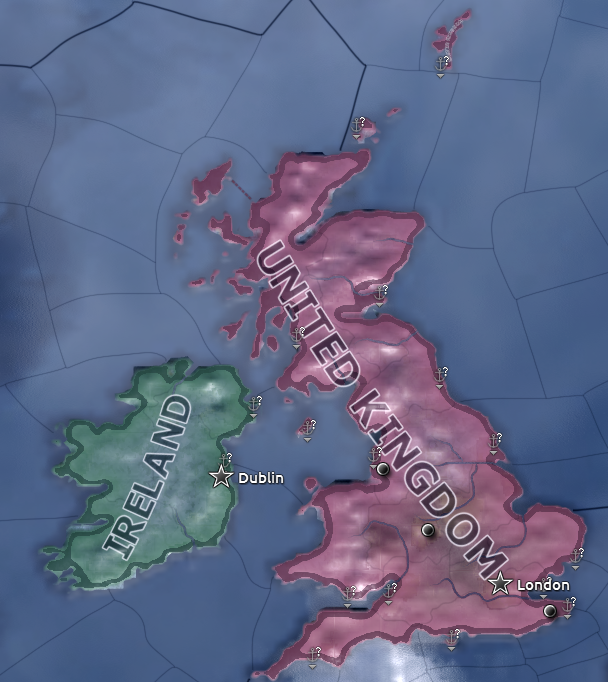 The United Kingdom is the diplomatic powerhouse of the world. They begin the game as the faction leader of the League of Nations - a faction consisting of the independent nations of Spain and Portugal, as well as Britain's puppet states of Ireland, Egypt & the Raj and their dominions of Canada, Australia, New Zealand & South Africa. They too wish to expand their diplomatic sphere of influence, particularly into the Middle East and Eastern Asia. However, their military and economy are not comparable to Germany's, though they may be able to stand their own with their faction's help. It shouldn't have to come to armies, however - Britain's navy is it's wooden wall, and about double the size of Germany's by itself.

The newly born Soviet Republic, led by Leon Trotsky, is the emerging great power at the start of the game. The begin with a large army, but this lacks the modernisation possessed by Germany and the United Kingdom, however the Soviet High Command have some of the most innovative military ideas. They have emerged from their war with Japan changed - the former Russian Empire is claimed by the Russian State in the east, a puppet of the Japanese Empire. They seek to expand their borders - reclaiming Ukraine, conquering the Baltics and finally reconquering Eastern Siberia and driving Japan once more from the continent. Spreading the revolution is an obvious plus.

The Soviets also need to decide on their internal politics - do they go with the left or the right inside the Party? Do they introduce the implement a New Economic Policy, or continue with central planning?

Other nations that will receive a focus tree on the launch of the mod are Japan and the People's Revolutionary Front (one of the southern Chinese fractures). These may be covered in a further article proceeding release.

If you are interested in contributing to the mod, we'd love to hear from you! You can get involved in the Discord server - we recommend as the best way for getting in touch with the developers, sharing your ideas, reporting bugs or generally getting to know the community. You can also use the forums here on ModDB if you wish, though this will be checked less often than the Discord.

What are we going to be working on post-release? Well...

We're always looking to expand our existing focus trees, though this will probably take second priority behind expanding our focus tree range to other major countries in the world, notably the two Americas, France and Austria amongst others. We're also wishing to expand event chains to give a more immersive game to play!

However, I can give one special sneak-peak - the Balkans! This is the area I'm working on especially, and will get some loving in the future versions of the game. Will the expansion of Yugoslavia continue, transforming them into a European power controlling the majority of the Balkans? Will Austria, with Germany's help, be able to reclaim their empire and be a strong ally for Germany once again? Who knows!

Regardless of the specifics, one thing is for certain - we want your involvement, ideas and support.

And That's the Game

Thank you for reading this - the first of a hopeful series of developer correspondences about the mod. I hope it was informative and enjoyable - wetting your tastebuds for the (hopeful) release date of Ante Rebellum on the 30th of December.

This looks great so far. Waiting eagerly for the release.