Some good news peppered with a bit of bad news, but overall the winds are blowing towards action, reform and intergalactic war... Let us elaborate on the release set for this friday and once again talk about the future of this undertaking.

Some of you may have noticed the release date now hovering below the page's title; the 26th of June, this friday. So what does this mean?? Sadly, it may mean less than you think but I can say it means a next step in getting a complete star wars men of war experience out eventually.

It's been a couple years now since this silly project started, with many pitfalls and inactive periods and restarting several times over behind the scenes until now I finally feel I have come close enough to the level of quality that I wanted to present as a first download, that I think I'm comfortable with getting a somewhat playable portion of the mod out. I also think this project has gone on long enough without a public release.

Unfortunately, this does not mean I am releasing the full mod right now, as much simply isn't presentable or working. What I am comfortable with, though, is releasing a showcase of the general flow of infantry combat in the mod. So what does that mean for this release next friday?

This friday's release will include a basic infantry roster for two factions, the Grand Army of the Republic and The Confederacy of Independant Systems. Units included will be clone troopers in both variants, clone commandos, B1 battledroids and all the required weapons, thermal detonators included. B2s are technically included but they are using a B1 model with a modified E5 blaster for now, they will be updated in sooner or later.

This may seem bare at first, but it really is the only stuff that I can consider relatively finished and/or release-worthy. Believe it or not, but that is the harsh reality.

What then for the future?

I hereby announce the Clones of War Battle Packs!

The idea behind Battle Packs is to focus development to specific combinations of content in the prequel lore. For example, the The Battle of Geonosis Battle Pack would focus on expanding the Phase I roster of clone forces and include things like AT-TEs (as this is where they first appeared in the films), Attack of the Clones' signature red B1 battle droids and of course props specifically designed to make the creation of community-made maps on Geonosis possible. A Battle of Mygeeto Battle Pack would include things like UT-ATs, the Galactic Marines, Magnus Tri droids etc. aside from props specific to Mygeeto. These Battle Packs would build on each other and eventually include all the units you know and have come to love.

With that in mind, I have decided to shelf my ideas for a new story campaign set in the Clone Wars until the mod has more meat on its bones, as alot of energy went into that goal but I realise I need alot more experience to pull it off to a satisfactory level.

So the first Battle Pack I will be working on will be the planet where it all began: Geonosis in the Geonosis system, a foundry world and former headquarters of Geonosian Industries.

But until we drop our armies of clones down to Geonosis to invade it or scramble our hordes of battle droids to defend it, we will have a multiplayer infantry alpha to enjoy which will be actively updated and polished and which will be available to download right here, on Moddb.

I feel I must put this out, even though its a little personal. I am still very commited to releasing alot of content eventually, but this might not end up being the case. Besides having other responsibilities, I am quite passionate about this project. However, I am also quite the emotional wreck, which means there are periods where I don't even touch Men of War or this page for months on end. What does this mean for you? It means that at this moment I want to give it all, but we must face the reality that this project is probably too large for me alone, with my limited time, knowledge and experience and it may one day crash and burn into oblivion for whatever reason.

Always remember, though: Silence does not mean death, unless I say it does.

Finally, a couple of nice pics to showcase some of the new models :) 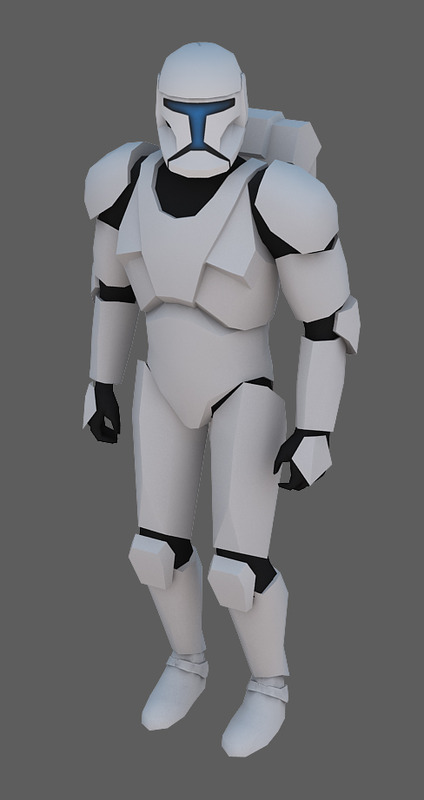 May the force be with you, always.

So..., the release of tomorrow will not have vehicles? I am a bit dissapointed... :(

Nevertheless congrats for the release and I will be expecting for the full version ;)

Thank you, but dont be disheartened! This release will serve as a platform to build on incrementally and steadily instead of in very large chunks that'll never finish. Begun this clone war has, and reinforcements are coming...

Jeje, I will be waiting for these reinforcementes :D.
Meanwhile I will turn some tinplates in scrap ;)

Sory, Is this version of mod include some maps from Star Wars?
btw. BIG BIG congratulations for this what have you done yet! :D

Sadly no, there will be no new maps included in tomorrow's release.

I wouldn't know but have you tried talking with the team at Galaxy in war they could help you with maps, skins, probably ?

I think it'd be great if you teamed up with TrooperBuzzdee Moddb.com

I agree, that would be really great. If we'd team up we would become more powerful than anyone could possibly imagine!

I didnt know you were working alone. :d Why dont you get some help? A lot of people would be very glad to help in mapping, skripting and modeling.
Btw. thanks for the release its small but its a good beginning!

Emotional wreck huh? I know those feels all too well.

At any rate, I'm ecstatic to see a release. Your work is superb, I'm looking forward to playing.

By the way, I PM-ed you quite some time ago about exporting models; I'm available to do this now, if you still want any assistance.

I could help with star wars maps

I just want to say thank you, it means a lot to me and I'm sure many others in the community as well would thank you. Taking time out of your life to further something like this mod for us and yourself is devotion, and again I thank you.

I'm glad you're going to release bits here and there because you'll see the communities love for your work and create things you didnt think was possible giving you more motivation to keep producing, thanks for all your hard work and i cant wait for another update!