Say HELLO to CREEPSLORE (first ever look at our upcoming game).

Writing introductory announcements is boring as hell, so let’s skip the usual fluff that no one cares about, and throw professionalism out the window. Dare say ‘for immediate release’ and all I’ll think about is diarrhea and poop jokes. No one really wants press kits, nor bothers to properly read them, so here’s the main bullet points that you want to know:

CREEPSLORE is the lovechild of Ferris Bueller's Day off and Final Fantasy with a hint of Resident Evil.

CREEPSLORE is a hybrid 2.5D point-and-click adventure visual novel that mixes these classic mediums and mashes them together into one giant ball of fur.

I can, but it won’t just suddenly materialize next to me. This isn’t Beetlejuice or Candyman. *gets head bashed in*

During the 2018 Christmas season I got annoyed at myself and pissed off at how most games are not being the way I want them to be anymore. I came up with the base concept of CREEPSLORE, and hit up a good friend of mine to tackle the character designs and-

Well, from one hack fraud to another: Ask proper questions then.
CREEPSLORE is about a character who gets suckered into an adventure after applying for work somewhere in the Atlantic Ocean. After realizing he answered to a fake ad, and there’s neither beautiful women nor men around, he now has to deal with a bunch of intoxicated and ugly monsters with idiosyncratic tendencies (ergo: they’re also stupid). However, what starts out as sheer annoyance on his part, slowly changes into acceptance, and an understanding that humans might be the worse creatures after all. 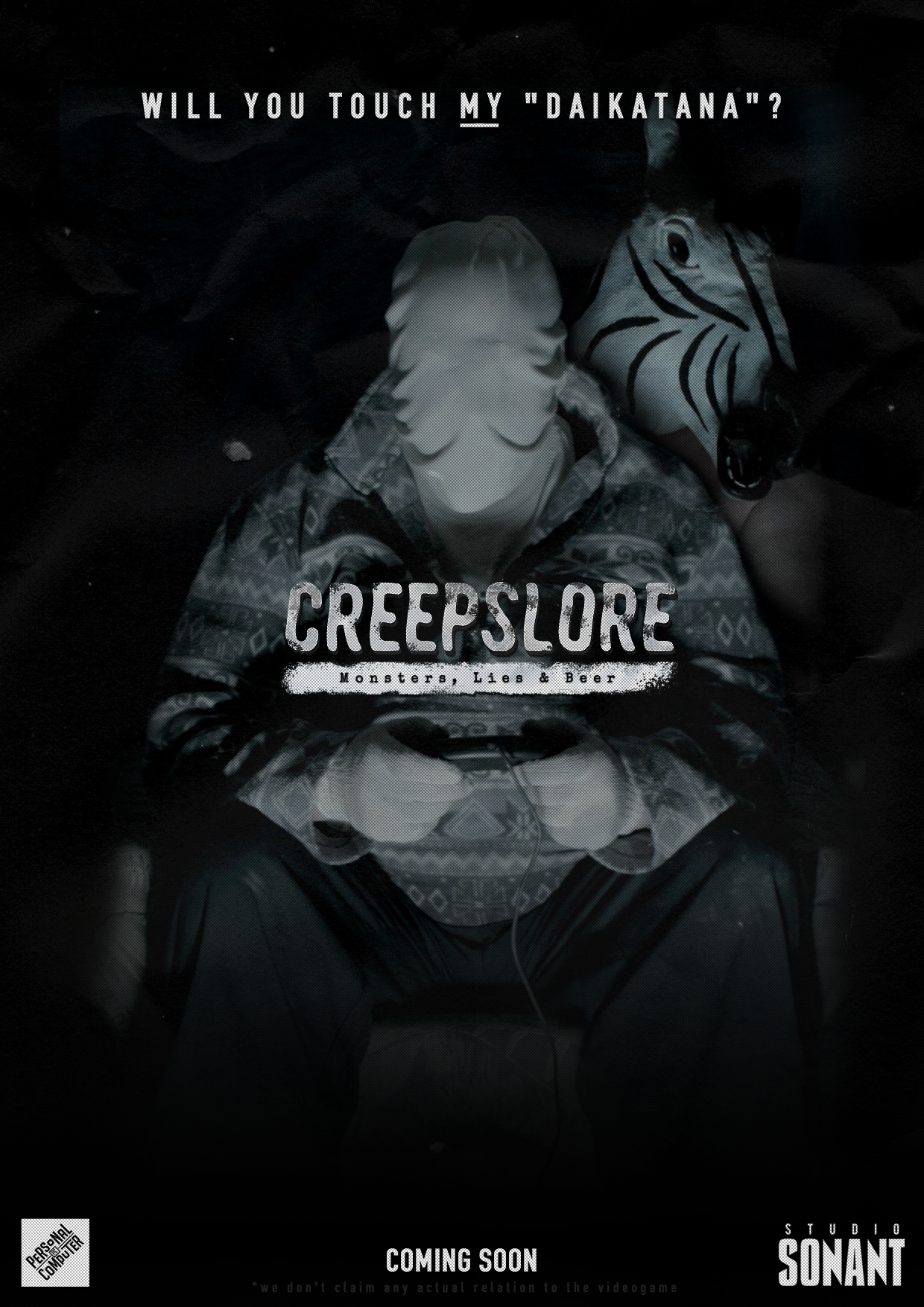 One flaw of Visual Novels is their replayability. If you ever wanted to get the most of them, you were generally forced to replay a good chunk of the same thing again, only to get a meagre amount of extra content. We feel that this is equivalent to punishing the player, so instead, we’ll have you influence the story right at the very start. Depending on your choices, you will end up in either of the above, and you will know almost immediately if you’re on a new branch of the story or not.

Yes, we actually mean that. The original concept started out with only 4, but things kind of got out of hand. Technically the final count is above 100, but about 80 of those are drawn at this point.

Don’t let me get started on those... It really does. And it’s not ‘store_front.png, store_street.png’. You’ll see us teasing more locations as time goes by, but we obviously don’t want to spoil too much, especially at the stage of this announcement.

It may seem that way, but it actually isn’t. We tried the ‘classic’ method of building environments in 3D modeling packages and rendering them, but we came to the conclusion that it just takes too much time to do anything, for a project of this scale at least. Especially if you want to replicate / reference a look of an era, it’s a lot easier to just use the actual ‘thing’ itself, and not spend extra time in some tool to ‘get it right’. The ‘look’ it gives us complements the story quite well.
Not to mention, we have a good chunk of experience with BSP mapping, and an undying love for it.

When it’s done. We’re not making any promises here, we’re not doing this full time as of this point. Sometimes there’s more progress, sometimes there’s less. We have an ‘in-house’ ETA, but you never know nowadays. Plus we’re only two people.

Oh so NOW you’re interested? Gee, thanks... The team is made up one part from a Mysterious Creature fueled by a high percentage of Alcohol and Art Supplies, while the other half is a Bootleg Johnny Depp dashed with an Angry Gerbil and a Diploma in Internet Mouth Karate.

Our motto is to not take most things super seriously. There’s no fun in that. Feel free to point at us and laugh, we don’t mind.