This release is for July 19, 2009. It adds the long promised NPC vs NPC combat system. It also adds 2 new solar systems and finished the Core worlds.

ASoD 0.65
This release is for July 19, 2009. It adds the long promised NPC vs NPC combat system. It also adds 2 new solar systems and finished the Core worlds.


Overview
Among Seas of Dust 0.65 has added some of the final touches to the AI of the game. It has allowed them to identify a target getting too close to them, determine if it is hostile, and engage it. It can then return to normal patrol duty if it survives; if it dies it respawns as a new patroller.

How it Works
The AI obeys a few very simple rules. These rules include....

These simple rules allow an amazing diversity of behaviors such as piracy (rogue pirate patrols selecting a trader as a target), base defenses, attacks, and battle sizes from epic fleets to duels. That is how I write AI code, I try to make rules and allow the emergent behaviors to do the rest. I spelled out nothing about any specific type of behavior besides identify -> check reputation -> engage or ignore. 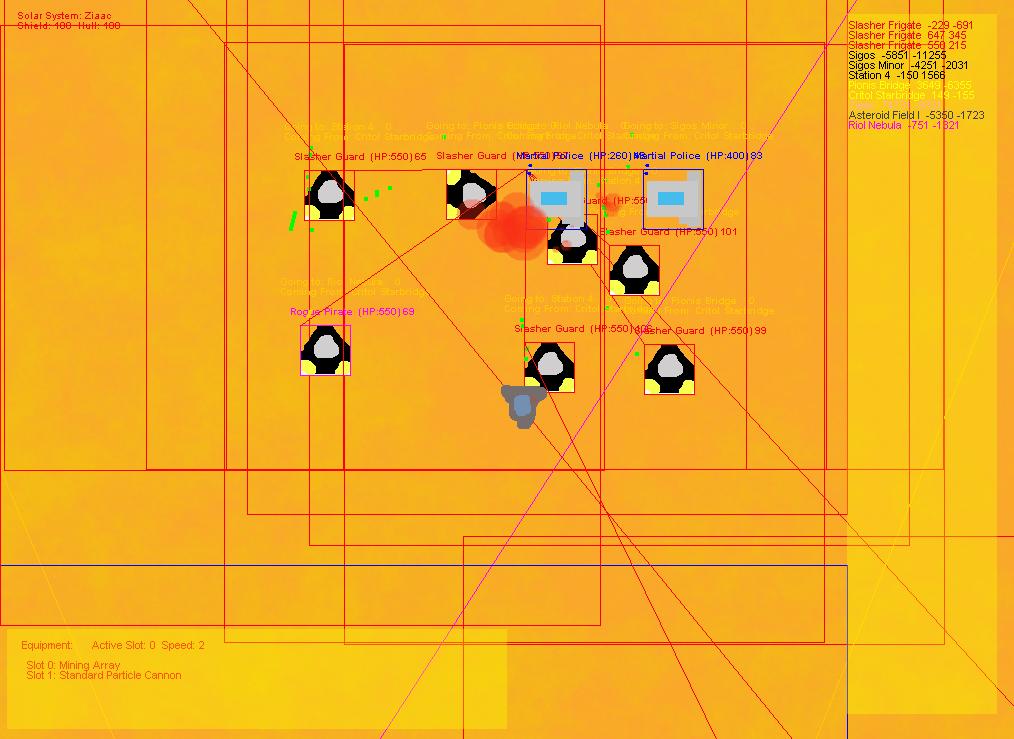 In the above image you can see how it works. This image is of the new improved Debug mode that is infinitely helpful in bug hunting. Notice that the details are complete, it looks just like any other combat situation.

The best part is that the player is preserved. Even when engaged in a full scale fleet battle of 20 vs 20 if the player has bad standings he is included and moved somewhat to the top of the possible target list. The target is a factor of distance and standings, and often times the player wins.

Comments
Please send your comments to me. You can also reach my by masternerdguy@yahoo.com . Your opinion matters!NOTE: Please remember to delete your old ASoD 0.6 and before files before attempting to run this program, otherwise it will corrupt the new stuff that was added in ASoD 0.65 . This is due to the way it saves the position of objects. These files are located in /home/you on linux and c:\ on windows xp and Public in vista. They may be hidden. They are called ".amongSeasOfDust", ".amongSeasOfDustStandings*, and ".amongSeasOfDustStarMap" .

I'm a little confused but interested. I'll check it out..

If it wasted lots of CPU cycles to damage non-player and non-targets then you may have programmed it wrong or programmed something inefficiently?

im working on it. I am trying some new methods and we'll see in the next release.