I talk a bit about the new ambient occlusion (what is it, why, etc.) and show the new, improved graphics with a screenshot.

Before I begin blogging, let me notify you about the fact that you can now differ regular blogs from techblogs (the blogs where I go in-depth about the mechanics), by simply looking at the text between the brackets in the title (for instance, this is a 'regular' blog). Anyhow, onto the blog!

Today I spent some more time working on ambient occlusion (AO). It's a really slow process, so currently I'm only redoing the absolute necessary, such as trees, rocks and the world model. Details will be for later, as I don't wanna spend working on just one thing for an entire week.

Anyhow, today's focus was on the actual world model. Previously, the world was only being shaded upwards along the z-axis. What this simply means is: The lower the model goes, the darker it becomes. This makes ocean bottoms extremely dark and mountains extremely light. A nice, cheap method to get some "ok" effects.

However, we can improve it. We can, besides the previously mentioned shading, also apply our new AO techniques to make small crevices extra dark. I've done some work and it looks somewhat like this: 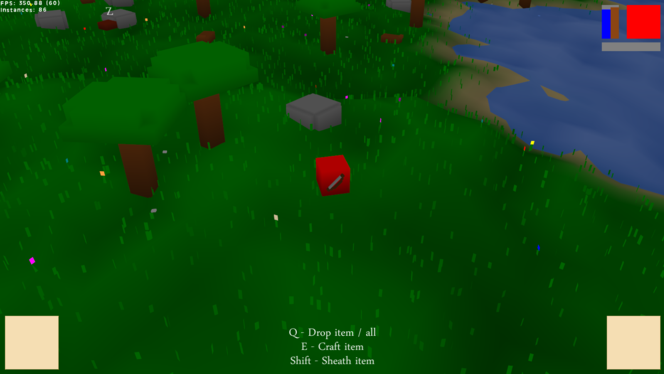 There's nothing more to be said, apart from: "It looks better". I think we can all agree on that. I've also tried getting my shader to darken the transition between objects and the world. So, for instance, at the bottom of a tree or rock, the pixels would be darkened a little more. I don't know why this is so hard to pull off, but I'll get it eventually. Once I've got that working, the game's graphics will finally be boosted to where I want them to (I hope).

Oh, little sidenote here. You might be wondering why I don't add textures into Bloxia, as that would "vamp the graphics". This is something most people think, but it's not that simple to just add a texture. If I were to add a texture, it would look flat and boring. I'd also need a normal map, a bump map, a specular map and an occlusion map. I then need to stack these all together into one shader (in realtime!) and apply them onto the proper position in the model; which, by the way, isn't specified either.

You can read more technical details about the textures and the world AO in today's techblog (it's a lenghty one, though).

I'm currently in a debate (with myself) on what to work on next. I would love to go and add a proper feature, after way too long, but I also want the graphics to be done. I think I'll just leave it as is for now, and move on to a nice new feature. Graphics aren't really all that exciting to blog about...