Introducing Aluna Games
It was recently announced by Aluna Games Ltd, a UK-based publisher and developer of online games, that the new Aluna Games online games portal would go live today. The site is dedicated to providing high quality online games - both multi and single player - to what will hopefully become a large base of active players, and by the looks of it, months of hard work has certainly paid off! Aluna Games claim to change the way you play online, and have already delved into the growing world of the MMORPG. Sacred Seasons 2, the hit browser fantasy/adventure MMORPG, is scheduled for launch on Aluna Games immediately following the launch of the portal. Currently under development is Origami Nation Online, an intriguing First Person Shooter. Origami Nation Online is expected to launch on Aluna Games during the first few months of 2011.

The company has also announced that both Aluna Gold, the site's e-currency, and the Aluna Games Marketplace shall be making their way to the portal in the coming weeks. 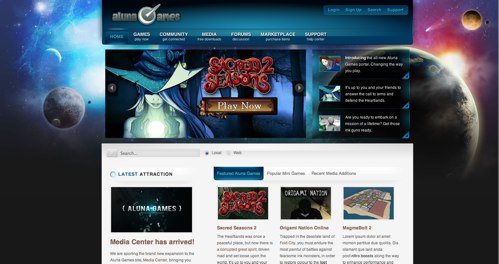 About Aluna Games
Aluna Games is an early stage game development company, publishing and developing premier online games and specializing in the free-to-play gaming market. Founded on September 1st 2010, launched on January 1st 2011, and headquartered in Greater London, UK, Aluna Games hopes to enjoy a prolonged period of continued success, through each of the products and services offered, and to come."Welcome to a new era of online gaming. Aluna Games completely revolutionizes the way you play online. Providing gamers with a compelling portal of high quality free-to-play games and a top notch customer service to accompany them. Changing the Way You Play™"

Find out more at www.alunagames.com