Posted by lostsectortech on Aug 1st, 2013 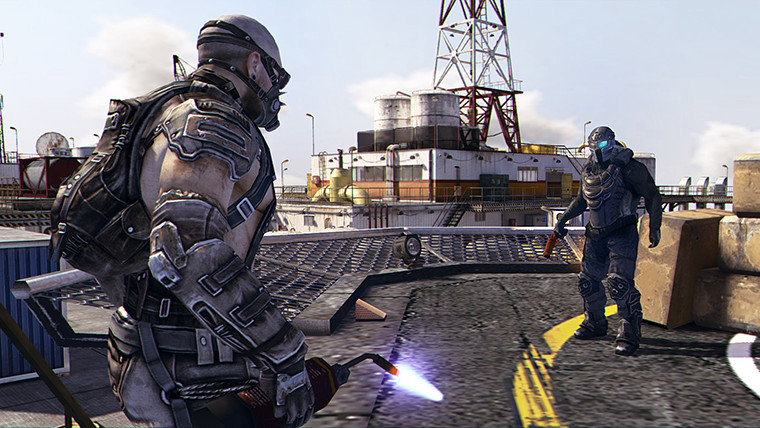 Starter pack
“Starter pack” is issued for buying gold, it is one-time gift and includes:
• New unique fun weapon "Signal rocket". (The screenshot on the right)
• Boost of movement speed on the global map for 21 hours game-time.
• Gained experience is doubled for 3 hours of game-time.

Cinematic camera
New cinematic camera has been added. When an attack is made, the camera shows the attacker and the target from different angles.
SHIFT aiming has been modified significantly. It behaves like in first person shooters with direct mouse aiming.

Quests
New cooperative contracts:
• "Detoxication" [levels 3-6]: Only one member of the group can neutralize toxins, protect him at any cost.
• "Weapon of executioner" [levels 5-9].

Existing contracts have been reworked:
• Contract "Laboratory material" is available at the Sheriff now.
• Police in the contract "Fire support" goes ahead of resistance groups.
• Some other improvements.

Graphics and Performance
• Glowing effect of lamps has been added (it can be turned off in the video settings).
• Added an option that allows you to restrict the maximum FPS (for those who have problems with overheating computers)

Social
• The window showing the list of players on the current location or on the global map has been improved. You can now find information about a player’s level, his clan, PvP-rank and it is possible to sort by these criteria.
• The global chat channel, “Help” has been added. You can get online help from moderators and players using it. The channel is visible in all locations including battles. Bans will be issued for spamming in the Help channel.

Balance
• Changes to melee weapons. It now has 100% attack accuracy. Mobility and damage have also been changed; The resistance of the armor is taken into account now.
• All melee weapons can now be purchased or crafted (including a combat knife, wrench, crowbar, bat, machete, axe, electric baton.)
• All melee attacks do not ignore resist of the armor.
• Fire damage distribution has been changed: now 80% of the damage ignores armor, 10% of damage affects armor-quality and 10% is neutralized by the armor. Unprotected targets get 100% of damage.
• Drug "Mars" increases the damage done using melee attacks by 20% instead of 30%.

Other changes
• Locations of the gang`s sectors on the global map have been modified. Levels of some gangs in sectors have been changed; some of the gangs changed their position. It is possible to take mercenaries with a difference of up to 2 levels from the gang`s level to attack the gang in its sector.
• The difference in power between different levels of the mobs of a gang in the different sectors has been increased (higher levels are stronger, lower levels are weaker). Now mobs in reinforced sectors do not run away from stronger squads and mobs in weakened sectors are now available to players at lower levels.
• Grenades and equipment can now stacked and put in a single inventory slot, similar to drugs. All items that were in active slots have been moved in inventory.
• NPC-renter can now give details about the rent service.
• The message of the opening event is now sent one time per session.
• Improved AI. Mobs are looking for the best target to attack. Mobs with RPG’s\crossbows do not fire farther than maximum radius of the weapon. Grenade throwers do not have to run in place while trying to attack.
• Now the approach of "Sudden death" cannot be knocked down by firing into the air.
• Armor and weapons don`t disappear when players get disconnected during a battle.
• Prohibition of changing the mode of loot share in party, while in the lobby and match making (explain this please, is it not allowed to change the way loot-sharing will be in effect while in the lobby and match making, or is it allowed in lobby and matchmaking and not ingame?)
• Helmet "The Executioner" can now be painted in camouflage colors.
• You can buy mask-flags "Canada", "Japan", "Scotland", "Jamaica" now.
• New paint textures for mobs have been added.