Portal 2 is almost ten years old. So is Alive & Kicking.

Early on, our plan was pretty simple: Remake Portal 1 in Portal 2's engine, using its new art style. This didn't take long, and quickly an executive decision was made to release a demo with what we had created.

The demo sucked. Big time. We immediately rebooted development and took the demo off this website. It's still circulating, which is unfortunate since it doesn't reflect the bar of quality we've since aimed for. After that embarrassment, we went through a few years of just trying to figure out how exactly we wanted to tackle this project - because it was very apparent the original goal wasn't something that people actually wanted, nor was it something we actually wanted.

When we launched our (now private, due to a string of harassment) Steam Greenlight page in early 2014, we used it as a platform to show our then-revisioned mod. The reception to this was much better - the shift to a hybrid art style seemed to really click with a lot of people and even garnered praise from developers of the original games. It did so well, in fact, that we hit the #1 spot on Greenlight within 48 hours.

A few years went by, chipping away at the project. In 2016, I attended Steam Dev Days in Seattle and met with Jeep Barnett, where I secured us a conditional Source Engine license, which would allow us to make further improvements we've been long-silent about. Things like an improved audio system by Dot Operator, restored functionality for test elements, and visual enhancements such as higher projected texture limits, and more. This was kept relatively simple, due to our push for similarities with Portal 2. I did ask for some fancy rendering tech, but I could live without it.

Eventually, we hit a slow but steady stride where we figured the best approach was to simply handle this as more of a reimagining. Most of the puzzles are the same, but many do see changes to help iron out wrinkles that stemmed from Portal 1's fairly rushed development. Little things, like part of Chamber 17 not requiring the Companion Cube despite the entire chamber being built around it (also, this was something a Valve employee specifically asked us to fix). There was nothing update-worthy, but it was still going strong.

And then life happened. A lot of the team left school, or in some cases started school. I myself went through a period where my home life was volatile and a bout with extreme poverty. I've even received some very pleasant comments from the loving community that really like to bring attention to this fact. Dot Operator has even graduated to a full-time position in the industry. To put it simply: A remake of a game on an engine barely different from the original does not take priority over our lives.

And let me be clear: It's still being worked on. Not as active as you might hope, but in just 2021 there have been well over 30 commits for the escape sequence. Will the mod release this year? Unlikely, but possible. Will it release next year? Maybe, it's hard to say. There's no definitive way to gauge a mod's completion, especially one that has seen reinvention so many times and has approximately one active developer right now.

This simply isn't the type of mod where we can provide updates. It's not worth updating when most changes we see are a hallway's dimensions changing slightly, or some lights being tweaked. And to bust a rumor now; no, we're not moving to Source 2, and no, Valve has not granted us access to anything beyond what we asked for.

I hate that it took this long to give you guys an update, but Alive & Kicking is still coming. We can't say when or in what form because we simply don't know those ourselves. Until then, 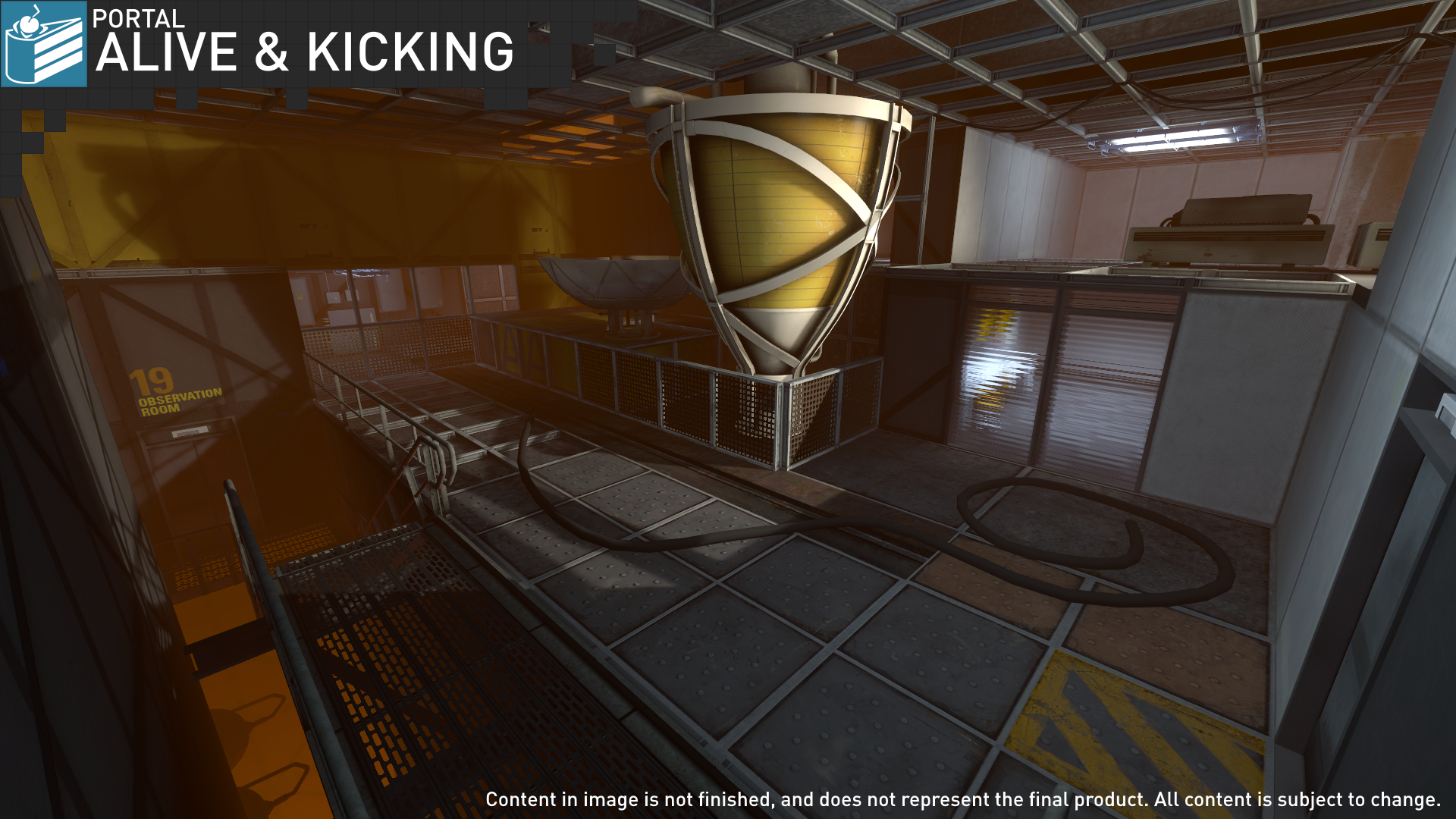 P.S. I am aware that the mod's page is broken. Looking into it!

I'm still GLaD this project is still alive AND kicking! even if the project is interrupted by personal events in your life, we still have faith.

This is probably the best comment we've ever received.

A miracle has occured! But seriously though, this looks really nice!

I really like this rusty fog, looks neat :O

Like Jeep Barnett, I can't wait to see what your team will do with the behind the scenes sections of Portal 1. Portal 2 had a different design philosophy for these parts, so I'm guessing your take on them will be quite creative.

Good luck and keep up the good work!

I always assumed the mod was still in development but it's always nice to see confirmation. Thank you for your continued and hard work.

I am so happy to hear you talk about the mod, i wish you all very good luck. And, yes you should give the mod all the time it needs. Just very exciting to hear from the devs. Anyways good luck.

What can I say? The mod still stands by its name, Alive and Kicking! Good luck on finishing this mod!

very relieved to hear this mod is still alive. take as much time as you need to finish it. no matter how long it takes, i'll be there to play it when it's ready.

wishing you the best of luck with the rest of development!!

Question: Are you going to get new voice actors, or are you going to reuse the original dialogue files? (EDIT: Should have asked this in the main comment section but it doesn't allow me to delete comments)

We're reusing original or unused dialog. Some of the original escape dialog clips pretty hard and has been remastered.

There's also this 15.ai thing you guys could give a check on.

I'm glad there was an update like this. Now we're not in the dark anymore about the mods state. It isn't as obvious to the people how the state of things are if you don't tell us, and now you get to have less comments about if the mod is dead or not! (Also, 7 years after article #1! Lol guys)

I'm gonna be honest the demo was what I expected from a portal remake, but if you guys want to go beyond that and still maintain your goal... that only gives me shivers. Happy the mod is... alive and kicking! Even if on slow development.

By the way, mind answering a question? Why did you guys not go through with the old soundtrack? The earlier parts of it could have some changes to fit within the style, but I felt like it was on the right direction of being a hybrid of both games. The later parts of the soundtrack, though it doesn't fit portal very much, where also tracks I could call favorites from all the ones I listened on my lifetime. Would be glad to have some light into this!

I agree. I really like the old soundtrack (especially You Can't Escape You Know and Still Still Alive)

A lot of reasons not worth going into. The new soundtrack is fantastic, though, and more than accomplishes all of the goals we wanted out of the music for the mod!

Where is the new soundtrack? Can I please listen to it?

Has much as I'd love to see the final project all of your personal well beings are far more important. I love the passion that's gone into the mod thus far and I'm sure it will be worth the weight.

When I was younger I don't know that I ever really understood why mods rarely get finished but now that I've thought about it a lot it's kinda surprising when they do come out. Sending all the love I can to the Dev team and I hope everyone stays safe and healthy during what is still a time of uncertainty.

So did you get Portal 2 GLaDOS animation rig from Valve? Because I wanted to remake final fight in Portal 2 style but quickly realized I will need to manually decompile and rig GLaDOS model, and since I never did 3D animation before I just got burned out and never finished it.